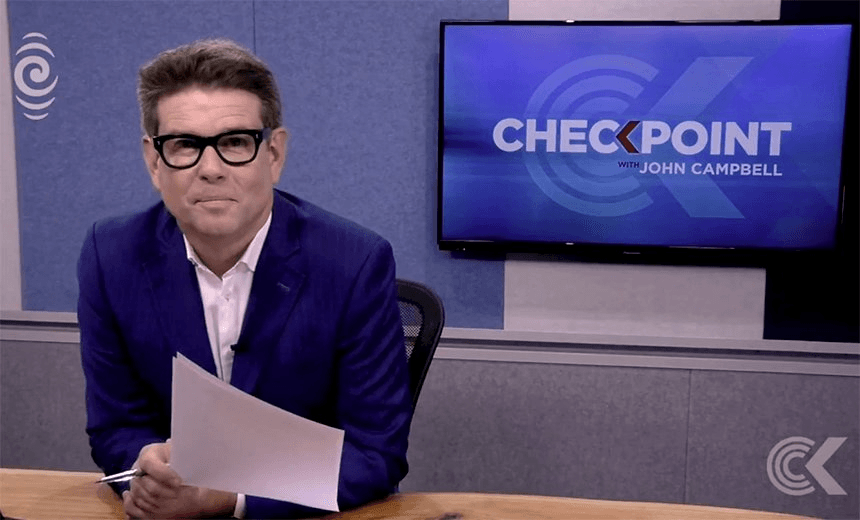 José Barbosa watches Checkpoint’s flash new live stream while Duncan Greive listens to John Campbell’s return to RNZ on the good old AM radio. Even though reviewing the first edition of a show is like reviewing a book after reading its first page, they’re going to tell you what they thought anyway.

“The Rhythm and Vines crowd were probably wearing jandals on their head,” said North & South editor Virginia Larson, a guest on RNZ’s The Panel. That effectively ended a conversation between gentle host Jim Mora and Gisborne resident Mike Vita. Mike was on the line because he’d spent the better part of 11 years collecting lost jandals and nailing them on the beach walkway. “It looks like jandals from the left feet predominate,” said Jim earlier. Mike corrected him, “ah no, both feet are pretty much represented.”

The only thing keeping me awake was the looping footage of the team behind the new Checkpoint running mock interviews in their specially constructed studio and control room. Streamed on the Checkpoint web page, the presumably  exhaustive preparation looked quite fun. One bloke posed in front of the camera like he was in a carnival hall of mirrors. Some one else photobombed a colleague doing a trial field interview from the RNZ foyer.

And then just like that it started: Checkpoint with John Campbell. Radio NZ’s second raising of a flag on the mount (thewireless.co.nz was the first) signalling to everyone the state broadcaster’s multi-platform ambition.

At the other end of the show James Milne, the composer of the new Checkpoint theme, told Campbell: “It had to evoke that sense of newsiness.” John was interviewing him in Checkpoint’s secondary “Friday night” interview space. It was a nondescript foyer complete with a blue couch, chipped credenza and a single Arcoroc mug.

Visually the rest of the show was somewhat like that Arcoroc mug, but, as we’ve been repeatedly told, this is a radio show first and foremost. Yet by introducing video to the mix, the audio seems to have suffered. The Lavalier mics don’t really hold up next to the lush sounding audio packages through out the show, and there were other audio problems, although none so bad a general audience would have noticed. And none that won’t be on an immediate “to fix” list.

Among the first tweaks to be made might be finding a Bay Of Plenty stringer. RNZ closed its Tauranga office last year and it left a gap, apparently to be filled by rowing champion and former Green Party candidate Rob Hamill. Rob didn’t do a bad job rattling off what he could see of a burning boat just off the coast of Whakatane, but presumably he won’t always be around to cover breaking news from the Bay.

The prep put into the weeks before the first show paid off. What we saw on Monday was a show that seemed to run to plan. There was little hesitation, even though nerves were showing. It didn’t have a sheen around it like Campbell Live did and because of that it feels like a show where anything could be allowed to happen. It feels like things could get a little looser, which isn’t a bad thing for a show on RNZ.

Hopefully the show will be allowed to flex and grow. Ideally, it should be like that Arcoroc mug: a combination of that RNZ robustness of investigation and Campbell’s natural, cosy, bonhomie.

There are few times of year less newsy than mid-January. Parliament is out of session, most high-powered people are squirrelled away at remote locations and it’s too cold to do much of anything in the international capitals of industry. So John Campbell got very lucky when a sleepy Monday in January opened with a boat on fire and the beginnings of what looks like a major sports story.

In fact, Checkpoint scored something of a weird coup by combining sports and hard news in roping in rowing legend Rob Hamill to report – more than competently as it happens – on the burning boat off Whakatane. There seemed for a while to be a third sporting element, as I repeatedly misheard the boat’s owner as being the PGA Tour – implying that many of the oldest and richest men in the world were in danger. In fact it was the more prosaic but quintessentially Kiwi ‘PJ’s Tours’ set alight.

The burning boat bumped their big get down to second place, a long-form interview with Nadine Lomu which showed both the immense promise of this new format, and hinted at the limitations Campbell can occasionally possess as an interviewer.

The conversation centred around money, which has sadly been the story of Jonah’s afterlife. There was a lot of it made but not so much around when he passed. On one level it was absolutely right and just that she be given a sympathetic ear to explain her side of the story – she has just lost her husband – and Campbell provided just that. Who knew that dialysis cost up to $5000 a week? Or that she’d tried to give Jonah her kidney? The interview played out very naturalistically, with lengthy pauses, and allowed a woman who has been painted in somewhat unflattering terms lately an opportunity to present her side of the story.

But the apartment sale between Lomu and her father wasn’t sufficiently deeply probed. $1.58m is the difference between a comfortable life and poverty for Nadine and her children. Why did they need a central Wellington apartment? Why did they pay nearly twice its rateable value, when property markets were grinding to a halt as the GFC took hold? We still don’t really know.

The second interview, with David Luddy, RNZ’s tennis correspondent, also seemed slightly off. The BBC/Buzzfeed investigation of match-fixing in tennis is transparently a seismic story, one which has the potential to grow into something as vast as drugs in cycling. Yet this weird chap they had on the ground at the Australian Open insisted that it was “old news”, “nothing new”, that the ATP CEO Chris Kermode was “a very honest and forthright man”. He sounded more like the Tour’s publicist than an inquisitive journalist. And Campbell, perhaps slightly stunned, didn’t do much to challenge Luddy’s odd assertions. Fortunately a later interview with Brett Steven more than compensated.

The show started to hit its stride in the second half hour. RNZ’s business reporter Nona Pelletier was brought in to talk about the lurching global markets. “No one’s got a clue what’s going on,” said Campbell breezily, and the pair of them spoke about global business in terms far more approachable than is typical for such segments – and thus more likely to be engaged with by a broader audience.

We hit Campbell Live standbys of drug law and poverty in ways both familiar from his programme and still vital in this new context. Cannabis law also featured heavily on Morning Report today, suggesting RNZ might be moving into an advocacy position there this year – something which the country probably needs.

Later there was more sport – Martin Guptill and Kane Williamson justly praised in glowing terms, not the sometimes-wooden style of other RNZ presenters when confronting sport. In fact, if you include Lomu, the sport content probably approached 50%, as far as time goes, and this seemed to me a brave and commendable production decision. It’s January –  there’s little else on. But, more pertinently, Campbell understands sport’s power and attraction to a broad-based audience on a very fundamental level, in a way that relatively few other RNZ hosts do.

Later there was more tennis – a plea for public money to revive the Stanley Street tennis centre. During that segment I began to pine a little for Mary Wilson, who might have asked why the likes of BMW and ASB Bank, who so enjoy sponsoring the event, couldn’t chip in, rather than taxpayers and ratepayers.

Wilson is missed. Her Checkpoint was a pacy, urgent show, little soft news, little human interest. She’d give everyone who came on with something to hide fits. It was often brilliant radio.

But the era where people need updating on the news of the day in the evening is drawing to a close. We get it all the time these days, if we want it. Morning Report is where the newsmakers are interrogated now, starting the day with punchy, no-frills stories.

John Campbell’s Checkpoint seems more concerned with examining the news than breaking it. But the tone and balance of the show was excellent, and the gestures to populism very welcome. It looks like creating the broadest church on RNZ in quite some time – exactly what the organisation requires at this pivotal juncture in its existence.