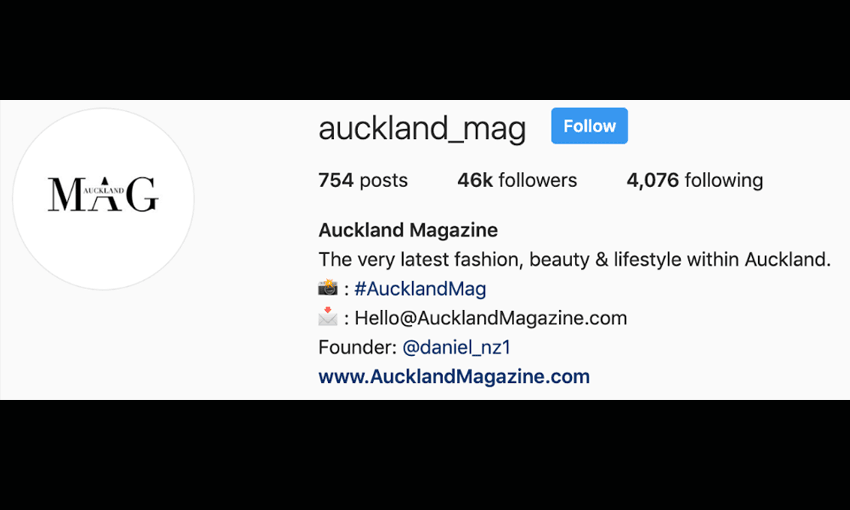 The curious case of Auckland Mag, the most popular website you’ve never heard of

The online magazine that boasted a bigger Instagram following than most New Zealand media has abruptly come to an end. So what was Auckland Mag? Why did it exist? And who was its mysterious founder Dan Rolph? David Farrier investigates.

The reply from Dan Rolph at Auckland Magazine came quickly.

It came quickly because it was an auto-reply, telling me that Auckland Magazine was gone-burgers. Its glorious time had come to an end. Rolph, its founder, was getting married.

He hopes to see us all soon.

I’d become interested in Auckland Magazine several years ago, after stumbling on their social media presence. The magazine boasted 46,000 followers on Instagram, more than double that of Metro, and almost four times that of The Spinoff. Now, both its Instagram account and its website are no longer available.

What was this behemoth of an online magazine I’d never heard of? It appeared to be a blog about Auckland, and it seemed to be run by a Daniel Rolph.

It also became apparent pretty quickly that nearly all of its content came from elsewhere on the internet. A piece about the new Tomb Raider movie seemed fairly normal until you googled the text and found it originated elsewhere.

As far as plagiarism went, it was at the lower end of offending, because it appeared to be lifted from a press release. Still, the byline of Daniel Rolph did bother me.

Curiosity piqued, I took a quick look at the Twitter account of Auckland Mag’s founder, and picked a random tweet to Google. Turns out, that rather tone-deaf gag appeared at least two years earlier somewhere else.

I tweeted my observations and instead of a response, I was blocked by Rolph almost immediately.

Ever since then, I’ve kept a casual eye on Auckland Magazine, trying to figure out what Rolph was playing at. According to this article, back in 2013, he was a 23-year-old model who had created “the second-largest casting company in the world” called Stomp Models.

Whoever conducted the interview appeared fairly enamoured, writing, “Dan Rolph sits in a designer lounge chair, tapping away at his keyboard, completely focused apart from when he’s reaching for his latte from time to time. He has another appointment in an hour, a diary full of engagements this weekend, and pretty busy schedules for most of the month”.

It went on to state that Rolph had 200,000 Twitter followers, a fashion range that had sold over 600 lines, and boasted 600 clients on Stomp’s books.

The profile ends with a bang:

“Dan’s phone rings. He apologises to the person on the other line and I realise I’ve made him late for his next appointment. Has it been an hour already? I wonder which website, magazine he’ll be chatting to next or what model or photographer he needs to organise. I bluntly ask who it was. ‘It was a charity. I recently became a patriot for charity which is a major thing for me. I’m a big fan of charity.'”

But three years later, Stomp Models came tumbling down, The Mirror writing: “His website names broadcasters including the BBC and Channel 4 but, again, he would not give me the details of work that his clients have secured at either organisation.”

“Its claim to be a highly respected casting company is equally hard to substantiate, not least because Stomp Models does not appear to be a company of any kind.”

From there Rolph appears to have relocated to New Zealand and started Auckland Mag, the publication I had stumbled on in 2017. There isn’t too much information about Rolph’s adventures in New Zealand, but a profile on Exploring New Zealand says he first came here in 2014 and simply decided to stay. That would have seen him camped out here while Stomp Models came to an end.

Somewhere during that time, Auckland Mag was born.

Last week, I decided to dig a little deeper into what the magazine was up to. It appeared things hadn’t changed much since 2017.

“I would just like to state that Dan Rolph completely plagiarized an article I wrote for the Philippine Daily Inquirer last September 21, 2019,” Anton Segismundo wrote to me. Segismundo was a journalist based in the Philippines.

“He copied the article and its headline word for word without giving credits. He then proceeded to credit himself for the article by putting his name in the byline,” he said.

I decided to write to Rolph, asking him what the hell was going on. He replied: “Just recently we have been trialling an RSS news aggregator on my blog which we used for a couple of weeks as we wanted to offer more of a world news option”.

“I felt that it was not the right way forward so this was disengaged from our platform and all content was removed”.

By now I’d reached out to the one writer who’d written some original content for Auckland Mag, who told me they’d recently left because plagiarised content had also been published under their name.

RSS news aggregator or not, a quick look over Auckland Mag’s last year of content seems to show that plagiarism has been a common theme. A local piece called Best Cafes in Auckland sourced copy from a variety of places, including from local writers.

I was curious about what else Rolph was up to and found them listed as Director of Social Strategy at Easy Social Media. His bio was impressive:

“Daniel has been working within the social media industry for 7 years, For the past few years, Daniel has been running an internet platform which was started from the early stages of Social Media Driving up to 2 million people a month on the website”

I can only assume the “internet platform” was Auckland Mag, as I could not find any other project with Rolph attached. I reached out to Easy Social Media to ask about Rolph’s role, and they replied, “Dan no longer works here.”

Realising that Rolph had been plagiarising other people’s work for at least two years, I decided to go back to him with another set of questions about what the hell he was up to, which is when I was informed, via auto-reply, that Auckland Mag was no more.

I am left with so many questions. What was Auckland Mag? Why did it exist? Did it exist purely to plagiarise? If so, to what end? Internet fame? Boredom? Somewhere to put the wedding photos?

A few days later, Rolph followed up the auto-reply with another message, specifically to me, trying to explain the rampant plagiarism:

In regards to the RSS feed we actually went through a company called Reuters (we had a month trial with them) which is a newswire Feed aggregator,

As mentioned before I really wanted the site to be for Auckland to help small business get some exposure,

I have been slowly winding down the site anyway due to other commitments in my life.

That email was the first original content I’d ever read from Auckland Mag.

This content was entirely funded by The Spinoff Members. Read more of David Farrier’s investigations.