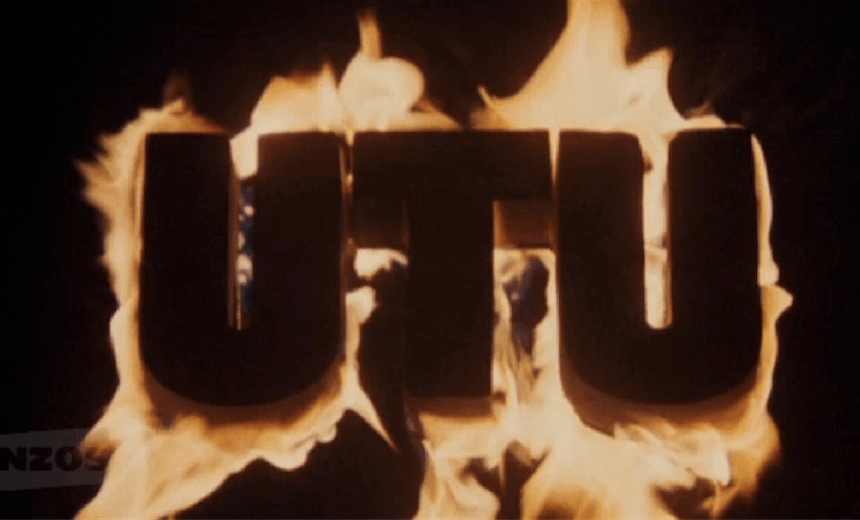 Quentin Tarantino called Geoff Murphy’s 1983 film Utu “hands down the best New Zealand movie of all time” while in Auckland this week to promote The Hateful Eight. In this essay, republished with the kind permission of NZ On Screen, Paul Stanley Ward and Costa Botes look back on the landmark piece of New Zealand cinema.

If there was a renaissance, or ‘new wave’ of NZ film making, then Geoff Murphy was riding it, and ride it he did, tall in the saddle with the vastly ambitious, but sometimes vexing ‘puha western’ Utu.

The film’s antecedents are clear. Murphy wears his love for Sergio Leone’s spaghetti westerns, and the countercultural attitudes of 1970s Hollywood cinema on his sleeve. But the unique cultural markers of NZ history poke through all the same, and give the picture a defining sense of uniqueness.

Released in 1983, when memories of Bastion Point and the Springbok Tour were fresh, Utu’s mix of unresolved colonial conflict and Murphy’s energetic direction promised to be as potent as the quadruple-barreled shot-gun Williamson (Bruno Lawrence) brandishes in the film.

The zeitgeist was ripe for a revisionist, genre-challenging epic made from our own muddy, blood-stained whenua. After the one-two punch of Murphy’s Goodbye Pork Pie (1981) and Roger Donaldson‘s Smash Palace (1982), there was a palpable air of expectation. The indications were that this was going to be a breakthrough picture.

It had scale, action and adventure, played out in the wild places of the volcanic plateau; a big rich symphonic score, composed by John Charles, and performed by our very own national orchestra; it had a bunch of well-loved Kiwi thespians, led by the immortal Bruno Lawrence, who revels in the role of the avenging farmer. Most of all it had Anzac Wallace — union delegate-turned-actor (starring as guerilla leader Te Wheke) — and what an impact he made in his sporadic career.

There’s much to like in the film, starting with the raw subject matter — which was inspired by real characters and events. A church scene where a Vicar loses his head, and the attack on the Williamson farm are both outstanding sequences, showing what Murphy was capable of. There is great energy and flair in the action scenes.

In The New Yorker, legendary critic Pauline Kael gave Utu an extended rave. She praised Murphy as a filmmaker with an eye for “a deracinated kind of hip lyricism”, and argued that he seemed to be directing with a grin on his face. Wrote Kael: “We know this basic story of colonialism from books and movies about other countries, but the ferocity of these skirmishes and raids is played off against an Arcadian beauty that makes your head swim.”

There are also moments of Murphy’s trademark laconic humour, for example when a post-coital Kura (Tania Bristowe) remarks “didn’t you say your gun could fire seven times without stopping?”

Murphy’s work had always existed in the space between popular film genres, and a specifically Kiwi sensibility. But for the first time, he arguably failed to bridge the gap. Utu’s shotgun approach to the great New Zealand (colonial) film ultimately leaves the narrative feeling episodic and tangled in the supplejack.

Yet, despite local critical ambivalence, the New Zealand public responded well; for a time it was Aotearoa’s second highest grossing film after Murphy’s Goodbye Pork Pie. Utu‘s revisionist take on ‘The New Zealand Wars’ helped rewire popular perceptions of our history, thanks partly to complexly motivated characters (where the good guys aren’t necessarily the boys in blue, and the bad guys aren’t always in harakeke skirts).

Roger Horrocks later wrote that although it was an uneven film, Utu “succeeded in stirring up more discussion of New Zealand history than any recent book has done.”

Utu was the second Kiwi film officially invited to Cannes (out of competition in 1983; The Scarecrow had been invited to the Director’s Fortnight the year before). Variety reviewed it promisingly: “Murphy has produced powerful images and strong performances. Action sequences, special effects, and visual exploitation of a rugged, high country location in central New Zealand are superb…”

In early 1984 Utu producer Don Blakeney asked Murphy to recut the film to make it “more accessible”, arguing that a big sale to France hinged on doing so. The recut has been referred to as ‘The Director’s Cut’, although Geoff Murphy had nothing to do with it, and later regretted allowing it to happen. In a 1985 interview for Onfilm magazine he remarked: “I declined to recut it myself because I was absolutely exhausted and saturated with it. I couldn’t face it.”

The film was shortened by almost 20 minutes, and the final fireside court martial scene intercut throughout the narrative. The consensus on this cut is that it is tidier, but lacks the personality of the original version.

It would be years until others seriously essayed the territory of the colonial wars. Unfortunately, Vincent Ward‘s River Queen walked into some of the same holes. The challenge of large scale period recreations on low Kiwi budgets, and of reconciling story conventions with a sense of historic truth that’s both respectful and accurate, remains unfulfilled.

Nevertheless in Utu there is a true raw excitement to be had in the risk; at seeing on screen the archetypes of the Western turned to post-colonial New Zealand themes for the first time. It is passionate filmmaking, and with talents like Murphy, Lawrence, Cowley and Wallace firing, a propulsively engaging attempt.

Thirty years after its initial release, Utu Redux introduced the film to a new generation of Kiwi cinema-goers. In 2013, the “enhanced and restored” cut, produced by Utu cinematographer Graeme Cowley with Murphy and editor Mike Horton, premiered at the Wellington opening night of the NZ International Film Festival, and won rave reviews.

The programme guide to the Festival touted the relevance of this “elegiac, absurdist vision of the devil’s spirit in paradise”, with the final campfire scene speaking “more clearly than ever to a New Zealand audience now”.

This essay was originally published on NZ On Screen. Published under Creative Commons license.