From selling out SkyCity Theatre to creating a show for Comedy Central, Joe Daymond is ready to take on the world. Stewart Sowman-Lund meets the up-and-coming comic.

Joe Daymond is a name you might not have heard before. But that’s all about to change.

Raised in Wainuiomata, the 25-year-old Fijian-Māori comedian is barely four years into his career but, since going viral during lockdown last year, he’s managed to sell out massive theatres, been on TV and is about to have his own webseries shown in the UK. He’s had slots on shows like Have You Been Paying Attention and 7 Days, launched a podcast, and acquired a devoted following of more than 44,000 on Instagram alone.

Basically, he’s achieved what few local comics can manage over an entire career.

Daymond was in the year above me at Wellington’s Scots College. It’s a school I never felt particularly aligned with and neither did he. “I always get asked if I was a class clown at school, and I really wasn’t,” he tells me, sipping a hot chocolate. “I had a big group of mates and they were super popular… but I was very much ‘sit at the front, keep to myself’. I don’t think I realised I was funny until I was in my 20s. I was the one who had to do all my mates’ 21st birthday speeches.”

After leaving school in 2013, Daymond was left with no real idea of what he wanted to do but shifted to Auckland to study commerce. He struggled. “Not with the work, but after going to boarding school, you’re used to having a structure around you and for me I thrive in a structure,” he says. “Obviously I was gonna pick getting on the piss and going to Bar101 four nights a week.” During the year, Daymond suffered from depression and developed a drinking problem. “What I realised was that, especially being a young brown dude, I never learned how to properly express myself and how to be confident in who I was. When you go away and you’re on your own you look for the only outlet that gives you confidence and for me that was getting pissed all the time.”

And so he dropped out of uni, moved back home to Wellington, lived with his parents, cut out the drinking and worked in a call centre. It was about building back the confidence he had lost, he says. He started doing a bachelor of construction and interning for a property developer, but hated it and left for a second time. “Why did I feel like I had to make my skills work in an environment that I don’t enjoy?” he questions, with hindsight.

Then, in 2017, Daymond’s comedy career started. He made a list of all the things he thought he’d be good at, and stand-up was right at the top. His first open mic night sealed the deal. “I still remember everything that happened. It was unreal. The MC was this comedian called Lloyd Langford… I walked in and he goes: ‘Joe Daymond? I can see that name in lights one day.’ I was like ‘mean’.”

Having developed a name on the open mic circuit, Daymond dabbled in television work. He started out as a writer on Jono and Ben. “I was barely six or seven months into my career so I was really lucky to get a shot. I had never written. But that was everything I needed to learn the ins and outs,” he says. “The next few years I was doing stand-up, bouncing around, working out how I was gonna build my career. I remember at the end of 2017 sitting down and planning out everything I was gonna do. The point I’ve got to now is what I always said was going to be the beginning of my journey.”

It wasn’t until last year’s nationwide lockdown that Daymond’s name became more widely known. He’d started regularly posting videos online at the start of 2019, roughly two years since first picking up a microphone, and in 2020 he went viral. “I always said that I was gonna spend a few years building myself up and developing myself as a comedian because I knew the one thing I didn’t want to do was get big on social media and then when the opportunity to do stand-up came I had no idea what I was doing,” he says. A year after posting his first video on Instagram he had 10,000 followers. During lockdown that more than tripled. It’s still rising a year on and Daymond posts regularly. Across all his platforms, his following extends beyond 100,000 people.

“A lot of people saw me blow up on social media… but it’s been years of knocking on doors. I think every single media company in the city probably has an old email from me. That’s what it takes… if you’re not out there actively trying to put yourself out there then it’s never gonna come.”

By the middle of last year, things were moving quickly. In July, Daymond sold out two nights at the 700-seater SkyCity Theatre in Auckland – a venue that’s hosted the likes of Nick Kroll, Fred Armisen and Urzila Carlson. He is the youngest comedian, second Pasifika and first Māori to sell out the venue. The decision to play SkyCity was something of a personal challenge for Daymond. “The biggest theatre in New Zealand stand-up comedy circles is the Rangatira room at Q Theatre. I remember thinking that was massive so I looked around town to see what was bigger,” he says. “I was shitting myself in the lead-up to it, but I did truly believe I could do it.” 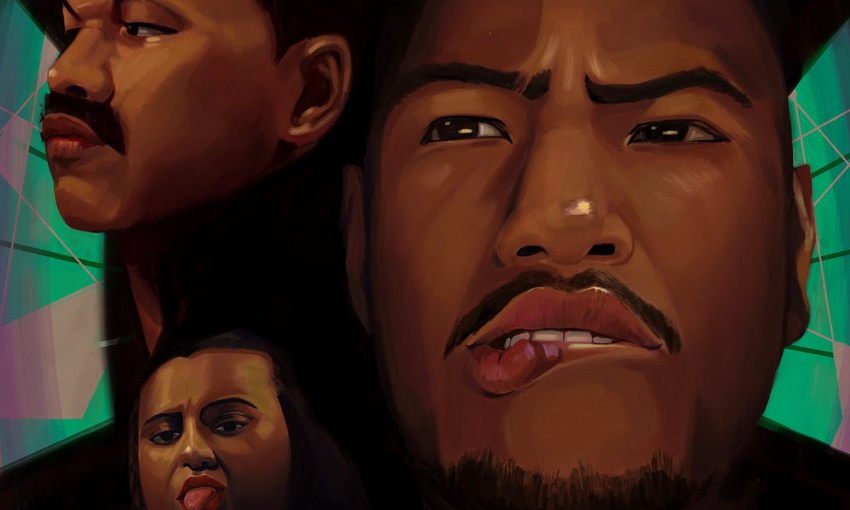 Throughout all of the highs and lows, Daymond says his parents have been there for him – but they struggled a bit with his decision to go into comedy. “My mum came from Fiji with a super poor background, my dad’s Māori. For them, a corporate environment and wearing a suit is success. It was super tough for them to have a son who was like ‘fuck it’.” Daymond says he’s grateful to his parents for “breaking the cycle” in their families. Without that, he says it would have been even harder for him to get out and freely pursue what he wanted to do. “My mum is a bald, very dark-skinned Fijian woman. She had to become this super tough woman in order to be taken seriously.”

Daymond’s next project is a series called Bouncers commissioned by Comedy Central and Sky NZ. The eight-part series – which follows a trio of security officers and their supervisor – is a collaboration between Daymond and producer Hanelle Harris, who created Sis. He’s working on the next series of that show as well. “I met Hanelle at a screening and I straight up asked her if she wanted any help cause I’d love to write on Sis.” She said yes.

His message to people now is always overstep where you think you should be. “The biggest thing that I kept getting through those open mic years was ‘you’re too young’ or ‘you’re not ready’. My attitude has always been that I don’t need to wait for anyone, I just have to go do it.”