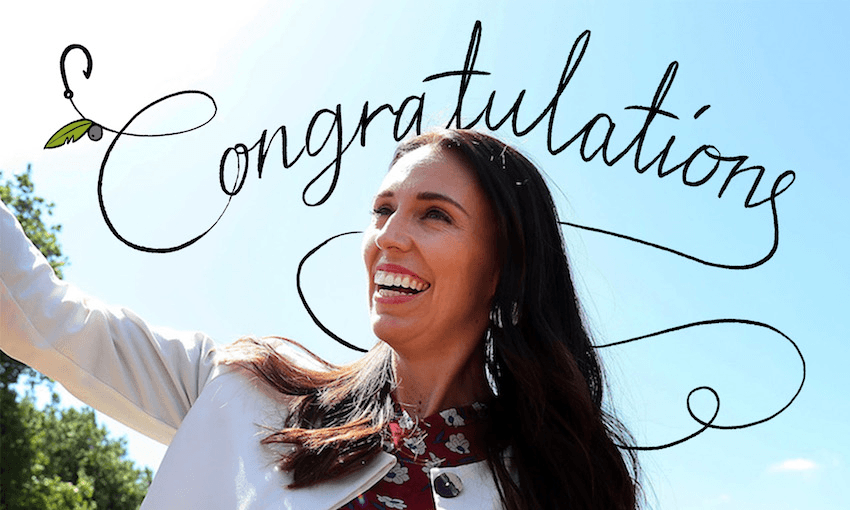 The best of The Spinoff this week: fresh beginnings for Jacinda, Jeremy and the good old Spinoff

“Every Waitangi it’s the same.

The lack of gratitude shown by Māori at being among the poorest, sickest, most unemployed and incarcerated people in Aotearoa is an ongoing source of consternation for a long white crowd of politicians.

In fact it’s a testament to the generosity and optimism of Māori that despite nearly two centuries of treaty breaches that have left them at the bottom of every statistical barrel you care to look in, thousands of Māori still turn up to honour the signing of the Treaty.”

Emily Writes: The PM’s baby: all the worst takes so far

“I live in the most wonderful liberal bubble. It is here in my echo chamber that I hide from terrible comments from people with shit for brains. I don’t venture into comments sections anymore; I just don’t want to be knee-deep in pus. I don’t watch Hosking or any other outrage goblins – instead I hide among friends on Twitter. It’s wondrous and I think you should try it.

Because for just five minutes I ventured out and what I came across could win awards in the fucking are you fucking serious these people are actual fucking morons awards.

Here are the worst takes, and my responses.”

“Seven Sharp launches into 2018 at the start of February with an all-new line-up, after the tearful farewell of Toni Street and Mike Hosking last year. Hilary Barry was swiftly announced as one of the two hosts, but who would be her sidekick? According to a well-placed source, that co-host is set to be Jeremy Wells. When contacted by the Spinoff, Wells said, ‘I’d love to comment, but I can’t comment.'”

Across the country there was celebration over the news prime minister Jacinda Ardern is pregnant with her first child. Privately, there was pain and heartache as those who wish for the chance to have a baby cope with the news. Alicia Young talks about compassion and empathy for those struggling.

Sarah Stewart: Working mothers make great employees, so stop being an asshole about them

“Babies. They’ll melt your heart and stretch your body. Few would disagree with that. But suck the IQ from your brain cells? It’s a frighteningly common insinuation. So on behalf of many working mums, I want to argue that growing a baby doesn’t shrink your mind.

Recently I wrote a story about pharmaceuticals and used the more common word ‘drugs’.’ A PR man wrote an email to my boss, explaining the industry prefers ‘medicines’. Then he felt the need to add this doozy: ‘But all OK we completely understand as Sarah is on maternity leave and juggling life as a new mum.’

Actually, this is not ‘all OK’.

It is completely patronising.”

Toby Manhire: Revealed: the outfit making more than one in every 20 OIAs to Auckland Council

“While the Spinoff is not in the same league as the tenacious grassroots activist group that has nothing against drag queens, we, too, are officially opposed to the waste of public money. And for this reason we were concerned to learn, via information obtained under the Local Government Official Information and Meetings Act (the local cousin of the OIA; we’re abbreviating both as OIA for neatness), that the Auckland Council has expended an estimated $39,100 over the course of a year dealing with official information requests from one organisation alone. That organisation – let me check the paperwork here – is the Taxpayers’ Union. Ratepayers, we think, deserve to know.”

Click here to read this review in te reo Māori.

Alexandra Saunders: Eight moves in eight years: What unstable housing is like for children

“Despite moving frequently and having a low family income we tried to give our daughter the stability she needed through set routines and a stable education. Remaining in the school zone through multiple moves was an expensive exercise. Despite this, she had issues with anxiety and the financial stress made being a part of our community challenging. It’s hard to join in when you can’t afford to.

Belonging, being a part of a place, was important to us and is something she hints at herself. When my daughter mentions she ‘… got to have [her] own room’ and ‘you can decorate it and leave [it] messy!’ she’s talking about mana whenua.”

Russell Brown: What’s happening in the PM’s Auckland suburb is a sign of things to come

As Housing NZ prepares to develop the corner near Russell Brown’s house in Point Chevalier, he muses on the redevelopment, gentrification and spiralling growth in real estate values of the Auckland suburb he calls home.