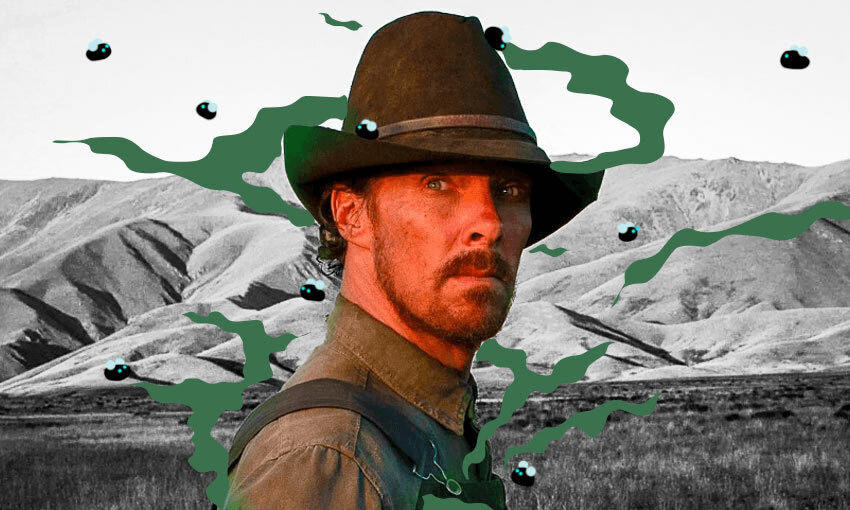 Benedict Cumberbatch loved New Zealand – he also stank it out

Local media has again erupted after Benedict Cumberbatch revealed that he loved his 2020 stay in New Zealand. But something stinks about his story.

This week Benedict Cumberbatch made the mistake of mentioning, for about the three thousandth time, that he loved being in New Zealand while filming Jane Campion’s The Power of the Dog in 2020. Spending over five months here, including during the first Covid-19 lockdown, Sir Cumbers has been extremely generous in his praise of our country, gushing to various media outlets about this “welcoming place” that he “loved” and considered “a new home.”

But there’s one crucial detail missing in the latest round of crooning Cumberbatch coverage: the notoriously yum-smelling actor chose to absolutely stink himself up while he was here. To fully embody The Power of the Dog’s brooding ranch owner Phil Burbank, Cumberbatch stopped showering in preparation for filming. He told Esquire that he craved a “layer of stink” on the character, saying: “I wanted people in the room to know what I smelt like.”

It didn’t stop at bathing, either. Phil Burbank goes hard on the durries, so Cumberbatch went hard on the durries. “I gave myself nicotine poisoning three times,” the Esquire article also revealed, “when you have to smoke a lot, it genuinely is horrible.” This, combined with the fact that he asked wardrobe to stop laundering his costumes, creates quite the tang in the mind’s nose. “The minute I put those clothes on, I was [Phil]. I could smell him,” Cumberbatch said, .

Given that this is not even the first time that a stinky actor has plagued our pristine shores, The Spinoff has crunched the data and done the relevant contact tracing to try and stop the stench. Here are the locations of stink-terest visited by a possibly ponging Benedict Cumberbatch while he was in Aotearoa, a place that he allegedly “loved”, nearly two years ago.

If you were in Ponsonby Social Club on Saturday June 20, 2020, you are a close contact of the Cumberstench. As reported by Newshub, Benedict Cumberbatch and co-stars Kirsten Dunst and Jesse Plemons were said to enjoy “top shelf stuff” at the Ponsonby Road hotspot, including some Japanese whiskey and tequila. Sounds like some pretty pungent liquor. Sounds like somebody trying to cover their tracks. Sounds like the exact kind of stinker who would move into a “more private area” (smell-proof chamber?) as the night progressed.

In one of the most impressive examples of investigative journalism of the last decade, an eagle-eyed Hawkes Bay Times reporter spotted a bookshelf in the background of Benedict’s Zoom call that looked a lot like the bookshelf in Summerlee Luxury Retreat in the Hawke’s Bay. According to their website, Summerlee Luxury Retreat boasts plenty of places to bathe, including a pool, a spa and seven bathrooms.

But, using the power of important journalistic tool of red circles, I would like to draw your attention to ANOTHER crucial detail that suggests NONE of those facilities were utilised by the ‘Batch.

Do you see? His nostrils are flaring. His mouth is upturned in disgust. All my modeling points to one possible scenario: Cumberbatch is smelling himself in this moment. Given that Summerlee is within “easy reach” of New Zealand’s largest gannet colony, and that gannets are famously New Zealand’s stinkiest bird, you have to once again ask – coincidence or cover-up?

Cumberbatch has repeatedly shared an anecdote about director Jane Campion inviting him out to a sumptuous sushi lunch while he was, as The Spinoff understands, in a state of peak stench. “I was literally emanating – I had a biohazard zone around me,” he told USA Today. “It was not a good time to cuddle up to Cumberbatch and take a selfie.” Retelling the story again on Late Night with Seth Meyers, he recalled walking “five feet” in front of the director, and that his malodorous musk caused selfie hunters to “run in the opposite direction”.

To be safe, anyone who went to any sushi restaurant in New Zealand in 2020 should probably have a shower.

The Spinoff has spoken to an anonymous source who spotted Cumberbatch at popular Auckland trampoline park Uptown Bounce in July, 2020. “Most memorable thing from him being there was that he was wearing trackpants but they seemed like the most expensive/luxurious trackpants in the world,” they said, “and he stunk.”

Anyone who has been on or near a trampoline in the last two years is being asked to spray themselves with Impulse and/or Lynx Africa.

As reported by Hawke’s Bay Today, the go-to publication for all things Cumber and Batch, a dubious source claimed to have seen the star at the Camberley Dairy. “Pretty sure he shoplifted a bag of Burger Rings,” they recalled. The Spinoff has no further comment to make without a lawyer present, apart from that Burger Rings are one of the top three chips, and that anyone who has come into contact with Burger Rings in the last two years is deemed a legend.

“Sometimes I forget that I work at a bougie winery,” said Haylee Oliver, assistant vineyard manager at Mudbrick Vineyard, “but today I was cruising by the winery restaurant on my tractor and saw Benedict Cumberbatch sitting there.” The key words “cruising” and “tractor” suggest that the exposure event was both fleeting in duration and physically distanced, so Waiheke residents are advised to self-monitor for any alarming aromas.

“Saw him at Craggy Range for lunch! I fangirl’d out BIG TIME!” Nic Olsen told The Hawkes Bay Today. “He wasn’t keen on a selfie.” There’s no mention of what he smelled like during his visit, but the selfie rejection suggests it was most likely because of the fumes. I would also like to point out another chilling detail from my very own Craggy Range reporting from 2019.

See the caption on this rump shot from my own trip? “Oh misty eye of the mountain below” is of course a lyric from the song ‘I See Fire’ by Ed Sheeran, which was of course commissioned for the soundtrack for The Hobbit: The Desolation of Smaug in 2013, which of course stars Cumberbatch as the titular Smaug. Coincidence? Almost certainly. Interesting? Barely. More to come on this story as it develops.

Did you smell Benedict Cumberbatch in 2020? Get in touch alex@thespinoff.co.nz

This article has been updated to reflect the fact that Benedict Cumberbatch was spotted, and possibly smelt, at both Craggy Range and Mudbrick Vineyards.