One of AUT’s Pacific research centres has been without a director since the end of last year and a lack of clarity around its future is causing division among staff and supporters. Teuila Fuatai reports.

Since 2007, AUT’s Pacific Media Centre has built a considerable portfolio and solid reputation for its research and reporting on issues throughout the Asia Pacific region, and as a training ground for Pasifika journalists and academics.

However, a month after veteran Pacific correspondent and researcher Professor David Robie retired as director late last year, the centre was packed up without any formal notification or explanation to the remaining AUT staff members associated with it. The move prompted a social media outcry among supporters and regional journalists, who raised concerns about the centre’s closure and the lack of communication from the university. 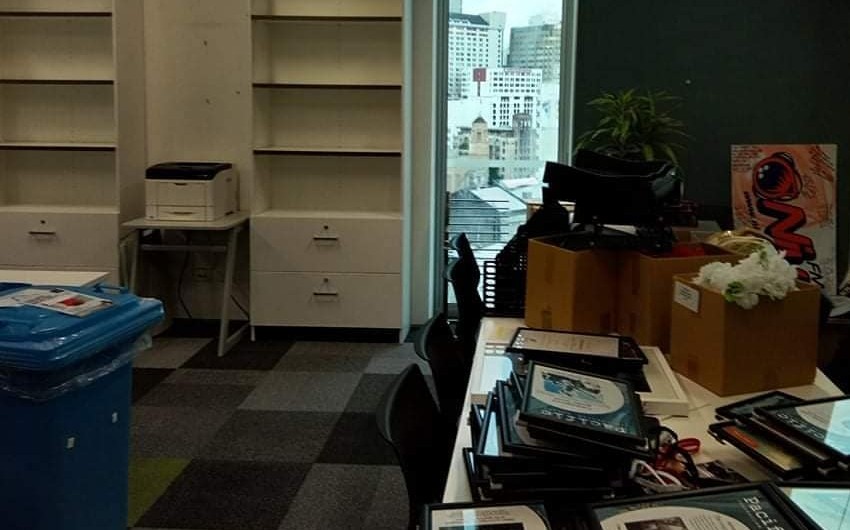 A photo of the packed up PMC sent to David Robie (Photo: Supplied)

However, in response to queries raised by The Spinoff, AUT’s head of the School of Communications Dr Rosser Johnson denied that the PMC was being closed, and reiterated that the contents of the PMC office had been packed up and relocated to a new space beside other key departments elsewhere in the AUT’s communications department.

“I made the decision that we were going to get all our staff of Pacific heritage in the same sort of place, which is on this [12th] floor,” Johnson said.

“We’ve got five staff of Pacific heritage – one won’t be moving because he’s in a department that’s on another floor. The rest are going to come up to here in the School of Communications.”

Johnson also said the decision to relocate the PMC from the space it had always occupied was made by the school’s “senior leadership team”. Staff connected to the PMC were only notified via email after it was done.

Senior lecturer and PMC research associate Khairiah Rahman, said it “would’ve been nice” to have been notified about the shift beforehand. An AUT staff member for 15 years, Rahman’s involvement with the PMC spans nearly a decade and she is also a member of its advisory board. She said the lack of information to staff members like herself has fuelled concerns about the school’s intentions for the PMC’s future. She said too that the absence of a succession plan for Robie’s replacement prior to his retirement had been particularly worrying.

“Ideally, [the transition] should be seamless. But Professor Robie retired at the end of last year… and we didn’t have a ready successor. I think it’s not a matter of blame but of strategic planning. Was it up to him [Robie] or was it up to the university?” According to Robie, he had tried several times to engage with the school regarding a transition plan in the past few years, but nothing had happened. Johnson, however, attributed the delays to the impacts of Covid-19. By September last year, a decision had been made by senior leadership staff “that we weren’t going to do anything new before the end of the year,” he said. The process was delayed again by this year’s lockdowns, he added. An internal advertisement was circulated among AUT staff over the past week seeking “expressions of interest” for the role of PMC director. Those keen to apply had until Friday March 26.

Chair of the PMC’s advisory board and an associate professor at AUT’s School of Social Sciences and Public Policy, Dr Camille Nakhid, said she was disappointed about the lack of information being offered to staff members like herself. Nakhid also believes the role of PMC director should be advertised externally to attract a range of qualified candidates.

“I understand… we may move things in a different direction, but we do not know what that direction is,” Nakhid said.

“We [the board] do wish for a reinvigorated PMC but we are concerned that the direction in which they take it will be to the detriment of the Pacific and Pacific communities and other communities with whom the PMC works.”

Robie, who is the founding editor of the research journal Pacific Journalism Review and continues to publish work through various outlets, has been critical of the treatment of the PMC since his departure from AUT. He is adamant those with long-standing links to the centre – like Nakhid and Rahman – not be sidelined in planning for its future.

“On every parameter, the centre’s done incredibly well,” Robie said. “If they follow through with the team they’ve got, I see a great future.”

A multi-disciplinary research unit, the PMC focuses on media and communication narratives in the Asia Pacific region and has a special focus on communities and journalists that have been marginalised or censored by authorities and power structures.

Prior to its move, the centre also housed a range of outlets enabling students and academics to publish and promote their work, including the award winning Pacific Media Watch, which was co-edited by a journalism student every year and helped foster the careers of Pasifika journalist Alistair Kata and RNZ journalist Alex Perrottet.

Robie himself brought considerable experience to the centre, having lived and worked extensively in Papua New Guinea and Fiji, and covered significant human rights and media abuses throughout the region over a 40-year career. The PMC had been established as an outlet to continue that work and for journalism students to research and cover regional issues largely neglected by New Zealand’s mainstream media, such as West Papuan human rights abuses and electoral corruption in Fiji.

Don Mann, chief executive of the Pacific Media Network which runs 531 PI and Niu FM, said the PMC’s current transition period was an opportunity for AUT to assess other ways it could strengthen Pacific media.

“First and foremost, I think to have an organisation that stands for what PMC was originally set up for – a watchdog organisation that protects the freedom of journalism and its role in the democracy – is very worthy,” he said.

“I think the issue which AUT is possibly facing is whether that’s AUT’s role.”

Moving forward, Mann said a focus on developing Pacific people in media and journalism at AUT would be great to see. The underrepresentation of Pacific people who are experts in their communities in media spaces has been a problem for far too long, he said.

“It would be a really opportune time for AUT to look at a centre of excellence for developing Pacific people in broadcasting, new media, journalism and multimedia.

“You look at where our office, Pacific Media Network, is based in Manukau,” Donn said.