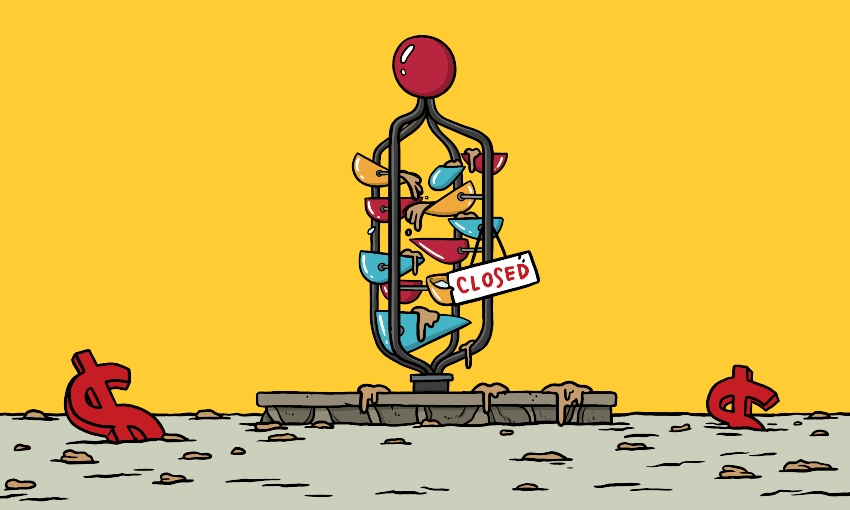 Laura Walters always intended to head for Wellington, a city she loves, when she moved back to New Zealand. But the reality is proving challenging.

I’ve been trying to get excited about moving back to the city that for so long lived up to its status as the coolest little capital. Now, with the average house price pushing over $1 million, sewage-filled streets, and the heritage mafia out in force, that slogan now feels ironic at best.

A trip down to Wellington was an exciting part of growing up in Manawatū. International film festival trips with French class; a night at the opera; week-long ballet boot camps; catch-ups with family. There was a buzz that didn’t exist in my regional centre. Wellington felt like a compact version of a global city, but with better coffee.

So when the time came, moving to Wellington to study was an easy choice. Never mind the bitter winds and earthquake risk. After a stint backpacking overseas, and three years in Auckland, moving back to the capital in 2015 felt like coming home.

A coffee with friends, beer after work, gigs or weekend markets were never more than a 15-minute walk away. Rent was climbing, but manageable. And as someone who had recently overcome their aversion to running, the town belt and south coast brought new meaning to Wellington On A Good Day.

When I left for the UK at the beginning of 2020, it was always with the view of coming back to make Wellington my permanent home. While Covid-19 trampled on my travel plans, the view to get back to Wellington and scope out a way to join the homeowners club remained. But as my September moving date nears, and I start thinking about what it will mean to reimmerse myself in capital city life, excitement gives way to apprehension.

Wellington’s compactness has created a buzz it’s been able to leverage for a long time. But goodwill and charm will only go so far. And without significant movement on the biggest issues plaguing the city patience will soon wear thin.

Last month, I visited the capital for the first time since landing back on home soil, and found myself wading through shin-deep floodwaters on Aro Street. As I battled the winds, it was all I could do to keep from thinking about what might be flowing beneath the surface. My welcome back to Wellington seemed like a metaphor for the state of the city.

Wellington has long battled a myriad of resilience and infrastructure issues, but the situation has come to a head. When I left in January 2020, pipes were beginning to spring leaks about the city centre; sewage was spilling into the harbour. Now, 18 months later, Wellington Water has warned the region’s pipe bursts and leaks will continue, despite the planned investment of almost $900 million over the next three years. When I hear the region is facing a bill of up to $13.2 billion over the next 30 years, as an aspirational first homeowner, it’s hard not to think of how that’ll impact rates and asset values.

But I shouldn’t get ahead of myself. The latest QV house price data puts the value of the average Wellington property over $1m. While growth is slowing (up 7.8% in June, compared to 10% growth in May), for as long as house and land prices continue to rise, I’ll be stuck in the competitive, over-priced rental market.

Like Wellington’s water issues, the housing shortage is far off resolution. It’s been more than five years since the country accepted it had a housing crisis, and while other main centres steadily work towards adding to their residential stock, Wellington is stagnant. Stats NZ data shows Auckland consented more than 19,000 new dwellings in June, up 29 percent compared to June 2020, while Canterbury experienced a 12 percent rise. Wellington consented 3205 new dwellings in June, a rise of just 1 percent.

Then there is the issue of the character-obsessed; those who are so determinedly opposed to the inevitable intensification of housing in the city’s centre. The usually mundane business of spatial plans caught the country’s attention in June, when the city council finalised its plan to deal with the 50,000 to 80,000 more people expected to call Wellington home in the next 30 years.

After a heated battle, where heritage campaigners pushed to expand character protected areas, the council signed off a plan to shrink protected character areas by almost three-quarters. The plan also allows at least six-storey developments in suburban centres and along key transit routes, and expands walking catchment areas for railway station stops and the central city. But it’s hard to see this as a win when almost 90% of land parcels in Wellington’s inner residential zone remain covered by character protection, as reported by the NZ Herald.

The battle for livability and affordability don’t stop there. The spatial plan will now be used to inform the district plan, and the council expects the usual legal challenges on some aspects of the district plan, likely taking the process through to 2024, or beyond.

Then there is the capital’s topography, low-lying areas, and earthquake risks to consider — just because building can legally take place, doesn’t mean it should. While it hasn’t been front-of-mind in recent months, the earthquake risk is a constant concern. It’s been almost five years since the Kaikoura earthquake, and Wellington is still feeling the effects of a rumble that took place on another island.

To get an idea of the lack of resilience and earthquake preparedness facing Wellington, you only have to look as far as the Kate Sheppard Apartments by parliament, which are undergoing $16m worth of work to replace every window in the building.

Then there’s transport. Before heading overseas, I sold my car, and have decided not to buy another until I can afford a respectable EV. If you have the option to do that anywhere in New Zealand, it’s got to be Wellington. I may now be regretting that choice, with some peak time bus services axed due to a driver shortage. Wellington doesn’t even have a public transport connection to its airport. At a time when the world is facing a climate emergency, it’s infuriating to see New Zealand’s capital city reducing public transport services.

Of course, bus issues are just one component of Wellington’s transport woes. It’s barely worth getting into the ongoing shambles that is Let’s Get Wellington Moving. Thankfully, there is a glimmer of hope on the horizon. The council is picking some low-hanging fruit, like bus priority measures and removing cars from the golden mile. This has the ability to capitalise on Wellington’s compactness, walkability, and address some of the deeply concerning safety issues in the inner-city.

These measures don’t strike at the heart of the biggest issues facing the capital. But if council can continue to find achievable initiatives to add to the safety, vibrancy and accessibility of the inner-city, it might buy some more goodwill. And it might stop people from being pulled towards other main centres – many of which now give Wellington a run for its money.

For now, then, I’m giving Wellington the benefit of the doubt. I believe it has the ability to once again live up to its reputation as the coolest little capital.