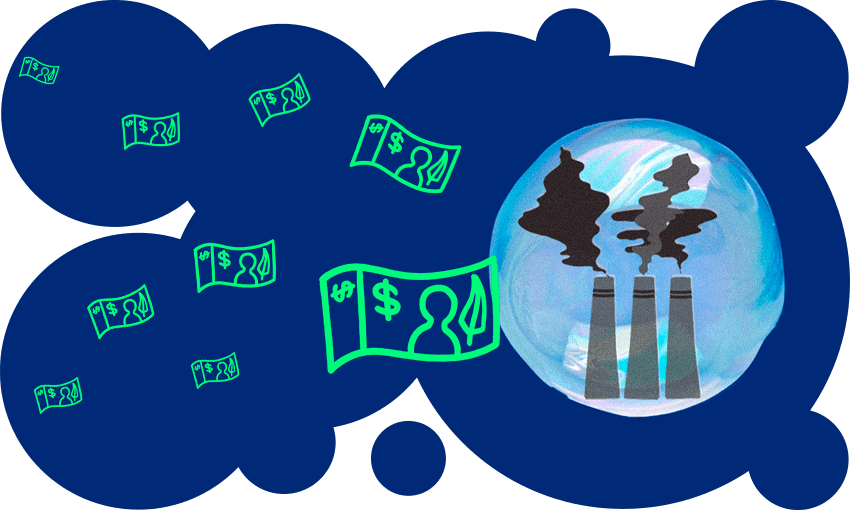 Is there a place for carbon credits in our climate change strategy?

As companies large and small are confronted with the worsening climate crisis, many have invested in carbon credits to offset their emissions. But this abstract currency may not be the solution we think it is.

That statement is becoming less unusual with each passing year. As the concentration of carbon dioxide in our atmosphere continues to soar well beyond dangerous levels, a lot of us have been wondering what we can do about it.

One proposed solution is to negotiate with polluters in the only language they know: money. Enter carbon credits, a pseudo-currency that promises to erase carbon footprints without touching the feet that make them.

It sounds like a miracle drug, though the practice has drawn heavy criticism from those who desire more fundamental change. Even still, the government has placed a lot of faith in the efficacy of this market-driven solution – faith that some are calling misguided.

But what are carbon credits?

Called “New Zealand units” within our emissions trading scheme, carbon credits are tokens that can be spent to offset a certain volume of emissions. Each credit is worth a metric tonne of carbon dioxide, though they can be used to offset other emissions too. A tonne of methane, which is roughly 25 times as potent as CO2, would cost around 25 carbon credits to offset.

The goal is to be “carbon neutral”, not by preventing emissions from entering the atmosphere but by making up for it once they do.

These credits are distributed for a number of reasons, though they all boil down to: “less carbon dioxide in the atmosphere”. The most common way to earn credits is by planting trees, which convert CO2 into organic matter as they grow. Another way is to prevent that CO2 from escaping in the first place.

When carbon farmers earn credits they can sell them to anyone they please, whether that’s the government, a private company, or a particularly concerned individual. An entire industry has grown from these transactions, led by agencies that specialise in carbon trading.

Ekos, operated by CEO Sean Weaver, is one such agency. His company is among several new businesses that cater to this emerging market, though not everybody is participating by choice.

Some volunteer, some comply

“Here in New Zealand, the government has instructed a certain number of companies that they have to acquire credits to match their emissions. That’s called the compliance carbon market,” Weaver says. “Then you’ve got another market, called the voluntary carbon market.”

Certain industrial sectors, like energy, are required by law to offset their carbon footprint as per New Zealand’s emissions trading scheme. Whether they want to or not, companies in this sector are obligated to buy enough carbon credits to match their total emissions.

In theory, this obligation forces companies like Genesis, Mercury and Meridian to consider the true cost of coal and fossil fuels. As Weaver says, “the price of carbon helps to drive decisions about reducing emissions”.

Historically, though, that price hasn’t been high enough. As recently as 2015, carbon credits could be bought for $5 each. Six years later, they’re worth $70.

“I’m encouraging the price to be as high as possible.”

Certain opportunists feel the same way. Though traders like Ekos make their money through service fees, others view the rapidly increasing price of carbon credits as a chance to speculate. “A lot of buyers in government auctions are [speculators], that does happen,” Weaver admits. “While one could argue that’s really a bit shonky, another could argue that without those people the market wouldn’t be as robust.”

Though they stand to profit from environmental degradation, these speculators play a natural role in driving demand, and prices, upward. In any case, Weaver reserves his moral judgment, “I’m not certain of how good or evil it is,” he says. “If that wasn’t an option it would certainly change the dynamic of the market.”

But carbon credits have also become popular among more altruistic buyers. A growing demographic for carbon traders is the voluntary carbon market.

For example, The Spinoff is an organisation that voluntarily purchases carbon credits to offset any emissions created during operation. For these customers, Ekos quantifies their carbon footprint and calculates the number of credits necessary to reach “net zero”.

Is offsetting always a good idea?

Weaver notes that offsets are no substitute for prevention and should be used only for emissions that are unavoidable, such as worker commutes. “What wears the trousers in climate action is the reduction of emissions,” he says. “Voluntary offsetting is only meaningful as part of a carbon measurement and reduction strategy, where you reduce where you can and offset what’s left over.”

Much of the criticism levied against New Zealand’s carbon market is in how much our climate strategy relies on offsetting. “New Zealand has a clean and green image, but we’re way behind when it comes to genuine action towards emission reductions,” says Weaver. “Many in the government think they can rely on offsets, but that’s a fiction.”

Others are even more critical, claiming that the discussion around carbon credits is fundamentally misleading. “There’s been a lot of hype around trees,” says climate expert Kevin Trenberth. “But an old-growth forest, by definition, is neutral in regard to carbon.”

Forests absorb carbon dioxide through photosynthesis, but Trenberth notes that much of these gases are released in the colder months. “Twigs and branches, and even trees, fall down and decay on the forest floor and put carbon dioxide back into the atmosphere,” he says.

In that sense, trees exhibit a “breathing” effect wherein they absorb and release carbon dioxide seasonally. Forests may eat carbon, but what goes in one end must come out the other. This points to a fundamental flaw within the mechanics of carbon offsetting, which is that CO2 isn’t being removed, it’s just being put in temporary storage. Carbon dioxide has a lifespan of several centuries, making offsets less of a solution and more of a deferral.

This is especially problematic as the worsening climate bares its teeth. “The problem is, we have bushfires in Australia, wildfires in California, in Portugal, in Spain, and Russia,” Trenberth says. “All of a sudden those offsets are gone. They’re back in the atmosphere.”

Sean Weaver points out, however, that there are measures in place to mitigate those risks. “Forests can, and do, burn down. Carbon projects have to account for that and find a way to manage that risk,” he says. “[Offset projects will] hold a percentage of those credits in reserve as a buffer. If there is a fire, the credits held in reserve can replace those that are lost. The lost forest can then be regrown to the same size it was before.”

In simpler terms, the people generating the offsets can offset damaged offsets with other offsets. Though this safety net isn’t enough to make carbon credits a substitute for genuine action.

What can we do instead?

Trenberth believes the only solution to New Zealand’s emissions is a strategy we’ve been putting off for years: a true push for renewable energy. “New Zealand has tremendous resources in terms of wind power,” he says. “Nobody’s even talking about off-shore wind power because we’ve yet to exploit the wind power on land.”

Another area with strong potential is solar power. Many territories within the United States, including Trenberth’s previous home of Colorado, have a net metering policy. This means that excess power generated through renewable means can be reused at a later date for no additional cost.

“The way this is done in New Zealand is, I think, criminal,” says Trenberth. “Companies like Genesis, who set the rates, buy power back at $0.08/kWh and then sell it for somewhere in the range of $0.26-0.32/kWh.” In other words, excess power generated by solar panels must be repurchased from energy providers, leading many New Zealanders to ignore solar altogether or otherwise limit their usage to hot water.

“[As a result] there’s very little solar on rooftops here, and there are no building codes to encourage it,” he says. “Many countries around the world have seen an explosion of solar power and it just hasn’t been matched in New Zealand.”

A proposed usage for carbon credits could be to temporarily offset emissions from cars as the country transitions to greater public transport and electric vehicle infrastructure. Sean Weaver envisions a world in which cars are near obsolete, and cities are redesigned to favour pedestrian access and a new public transport system incorporating electric scooters.

Though there is a place for carbon offsets within our climate change strategy, the experts say that place isn’t front and centre. Instead, offsets are a valuable supplementary tool to mitigate damage from unavoidable emissions or during periods of transition.

Neither critics nor advocates of carbon credits believe they can carry a climate response on their own. Instead, a true carbon-neutral future is one in which offsets are no longer necessary.