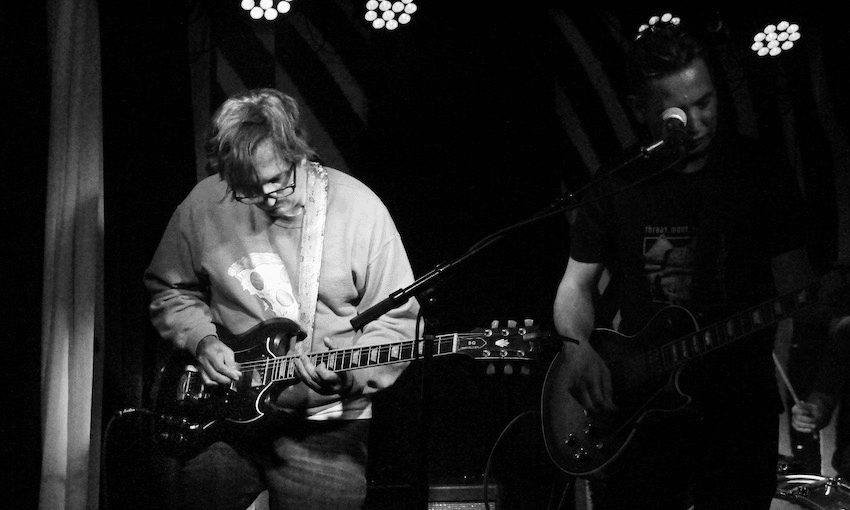 His band left on the tour of a lifetime. He came home with Covid-19

Auckland post-punk four piece Swallow the Rat embarked on a US tour just as Covid-19 started to really spread. Guitarist Brian Purington, originally from Austin, Texas, tells the story of a tour interrupted – and how he became one of New Zealand’s first 500 cases of Covid-19.

Brian Purington and his partner Charlotte Hill spoke to Duncan Greive. Their story has been condensed and edited.

I flew out in late February, a few days before my bandmates, leaving my partner and young son behind for a tour we’d been planning for the better part of a year. I wasn’t personally that concerned about Covid-19 when I left. There were a few isolated cases, and it was something we talked about – but it didn’t seem drastic enough to cancel a tour. It was almost more joked about, as weird as that is to say now.

I landed in Austin on Friday, the rest of the band arrived on Saturday, we practised on Sunday and started the tour in Dallas on the first Monday in March. I’d say the crowds were as much as we ever draw – around 50 people. But I’m positive nobody missed any of the first few shows because they were scared of getting the coronavirus.

The first hint we got that it was serious came when SXSW was cancelled. I’ve played every one of the festivals since 1998, so the idea that it wasn’t happening seemed unfathomable. At first we just thought it would be the way SXSW used to be, without Twitter, Facebook or Amazon there. That we would play the shows without 200,00 visitors there. I guess it was stages of grief. First denial, then acceptance.

When we realised that wasn’t happening, we made the trip up to New York. At that time, even though it was less than a month ago, there wasn’t any sense that the country was going to shut down. More shows were being booked the whole time, even then. We played a couple of shows, both on our own and as part of the New Colossus festival, and despite the story changing every day, it still felt essentially fine.

Then on the 11th they called a state of emergency in the state of New York. The bars were still open, but the atmosphere of the city completely changed. Nobody was out on the streets. Some people might say we should have called it off even then, but the way I looked at it was that the festival was still happening. That we were there to do a job, and we would do it until we were told we shouldn’t. The plan was to take it day-by-day. But each day the news just got worse and worse.

The last night out

After a week in New York, we finally had a day off. Thursday the 12th. For context, New Zealand had five cases at this point, and our borders were fully open – there wasn’t even any self-isolation requirement. But it felt heavy in New York, so due to all the stress, we ended up having a huge night out.

We spent a long time at this bar called Birdy’s in Bushwick. It got hazy and late. Our singer got lost on the way home. We were all going to the subway together, and all of a sudden he wasn’t there. He only showed up hours later – his phone had died, but somehow his lizard brain remembered where we were staying.

I’m making a lot of assumptions here, but I feel like I got Covid-19 that night.

We played two more shows and the last show – I can’t say it was particularly worth doing. There were like three people there. The atmosphere really turned that weekend.

We made the call to cancel the rest of the tour, and drove south to fly home. We headed to my aunt’s house in Richmond, which is about a seven-hour drive. Stayed there, woke up, had brunch, and left Richmond around 11am. It’s about a 24-hour drive from Richmond to Austin, and we did it straight through.

We drove in shifts, and when we weren’t driving we just tried to sleep as much as we could. When the driver got too tired we just swapped out. Stephen Horsley, our bassist, took some over-the-counter trucker Adderall which seemed to work. He did the hard shift, from 3am to 6am.

It was incredibly stressful. Nobody was trying to cut and run, but some people were definitely more anxious about it than others. My partner rebooked my flight for me, but my bandmates spent pretty much the entire trip back on the phone trying to suss out their flights. I don’t know how many hours were spent on speakerphone with American Airlines. It was a real shitshow.

The whole drive we consoled ourselves with the meal we’d have when we arrived. My favourite place to eat in Austin is Gourmands, a pub made out of an old nightclub. We arrived just as it was closing up for the shutdown, which really didn’t help our mood. In the final couple of days, while we waited to fly home, my old Austin band and I got together and played some music. It was pretty cathartic, and made me feel a little better about what had happened. How the tour had fallen apart, and this virus was rising everywhere.

Then it was over. The next day I had lunch with a close friend and he took me to the airport.

I arrived in Auckland on Friday, a couple of days after the restrictions had come into place for returning travellers, so I went straight into self-isolation. I started feeling sick, and called Healthline, who told me not to get tested unless I had more symptoms. I didn’t have a fever, so they weren’t too concerned.

My bandmate arrived after me, and he did have a fever, so he got tested. While we were waiting for the result, I just assumed I had it. I wasn’t overly concerned. After living in a state of stress for a whole month, it was just another day.

My bandmate’s test came back positive, so Healthline changed the recommendation, and said I should be tested too. I went to the testing station in St Lukes. The wait was about two hours, then they stuck a swab up my nose. It’s not very pleasant. Then they call you if it’s positive and they text you if you’re negative.

We waited in the car park underneath the St Lukes White Cross. You see the best and worst in people at times like this. The guy in the car next to us was wearing a welding mask, and refused to take it off. He had those rubber gloves that come right up to your armpit, and was passive-aggressively holding up a piece of paper with his details on it and yelling at the nurse through the welding mask.

The nurse couldn’t understand anything he was saying, but was very calm. It took about 10 minutes for him to lift up his mask and have a conversation with her.

It was a pretty uncomfortable situation, but thankfully my self-isolation worked. Despite my coming back positive, both my son and Charlotte tested negative.

I’ve been told I’m no longer contagious, and feel like I’m out the other side now. Physically, I feel fine. Out of 10, I’m probably a seven.