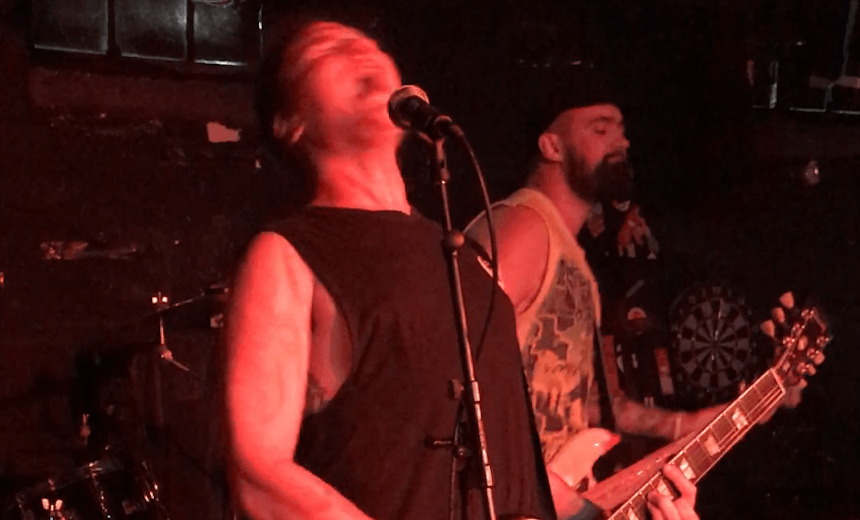 Negotiating skinheads, inflatable crocodiles, vegan snacks and the ghosts of Marx and Engels, Tom, Justin and Luke of Auckland hardcore punk band Master Blaster recounts their recent tour of Europe – 18 shows across 7 countries in 27 days. And there’s a music video to prove it.

The further we headed east in Poland, the hairier the looks became. Perhaps it was understandable. We had German number plates on our van and supposedly there was a large Nazi presence close to where we were playing but maybe the merchandise boldly stating “Fuck you fascist!” might have given it away. We weren’t lost. Or Nazis. We were definitely in the right place – Ultra Chaos Piknik in Zelebsko was to possibly be the most rungus festival we would play.

We were a few days into a month-long tour – 18 shows across 7 countries in 27 days. And things were going well. That is, until towards the end of our Zelebsko set. At about 1am during a downpour, a giant skinhead jumped on stage and tried to fight our bassist Tom because we didn’t sing in Polish. He grabbed the mic, ranted in broken English and swaggered around trying to get a reaction from the very wet crowd. Then, with no explanation, he jumped, tripped and face-planted off the two-metre high stage into mud and a sea of jeers. He got arrested soon after.

The tour was the result of four months planning – endless hours spent emailing, messaging and calling promoters, bands and friends – trying to figure out some logical route that wouldn’t have us chasing ourselves all over Europe.

We found ourselves in Leipzig – a punk paradise that is being hailed as the new Berlin – playing a skate park at Kone Island. From here we moved on to the Peter Pan club house AK44 in Giessen, having made lifelong friends with German hardcore band KICK IT! while on tour last year. There was crowd surfing, peppermint schnapps (pfefe), and the second best kebabs of the whole tour. With many games of Kicker, we hit Berlin, a very wet festival in Ovendorf, Chemnitz (formally known as Karl Marx City) and Rochlitz, population 5,000.

But before the shows had even begun, we ventured to Memento Park in Budapest to see the only cubist style Marx and Engels statue. That sparked a sort of pilgrimage across Europe digging out statues and graves of the German philosophers. People think that touring is all about playing shows, drinking, partying, hedonism and consumerism. For us it was one of communism, seizing the means of production, anarchist utopian bubbles, vegan snacks and class warfare.

Eventually, we found ourselves in Trutnov, Czech Republic. We arrived mid-morning to naked, passed out bodies protruding through the crowd of animal costumes and inflatable toys with the most camo clothing outside of a war zone, you were ever likely to see. Obscene Extreme is the world’s largest grindcore festival. Now in its 19th year, it extends out to a week of organised chaos and is a haven for freaks, outcasts and everything in between. The festival is noisy and fast. It was everything we could hope for.

It was only midday in Trutnov, yet the sea of costumed punters was already out in full force – stage diving onto unicorns and sending inflatable crocodiles into the circle pit. With our set finishing faster than we could imagine, we celebrated in our typical rushed manner of skulling the rider before having to rush off.

We had a five hour drive through back country Poland, navigating a huge police roadblock and search on the way to catch a flight from Berlin to get to the following day’s show in Bristol, England.

Our flight wasn’t until 6am the next morning so, by the time we arrived, we had seven hours to kill. The lovely man at the burrito shop outside the airport softened the pain of sleeping on the airport floor before the nightmare that is a Ryan Air check in. He sorted us some kai and cheap beers. Bless you, Mama Burrito & Sons.

Arriving at Stanstead Airport in London, running on no sleep and six warm Becks, we somehow convinced the car hire company to give us a van for the night despite not having one member of our tour party of five holding both a valid credit card and driver’s license in the same name. Planning. We were pumped to be back on the left-hand side of the road and tackled the last leg of our mission – five more hours to Bristol on the A25 with the English sun and Skips crisps making a much-welcomed appearance.

We careened through the city’s medieval streets, straight to the biggest vegan pizzas in the Northern Hemisphere. Like Lardass smashing blueberry pies in Stand By Me, we inhaled them and bumbled down to the park for a much-deserved nap before the Red Lion show with old punks Disorder and Seven Crowns.

We finished in London, playing the Pride Punx official after party. It acted as a benefit concert raising money to buy Status Quo’s (yes that Status Quo) old tour bus to turn into a mobile shelter for queer homeless youth and as a party for our friend Kieran from The Restarts, who turned 50 the day before. We quickly learned how to play ‘Happy Birthday’ at the Turkish restaurant down the road and had a round of shots with Kieran before we struggled our way through a Ramones version of the birthday classic.

The tour rushed past. Before long we had spent four weeks together, sleeping on floors, cramming in cars and sweating on stage. On the way to Heathrow Airport, we drove past the still burnt out skeleton of Grenfell Towers. Eighty people had died there. We fell silent. We had sought out historical symbols of class struggle across the continent, and here was one still smouldering in front of us.

Touring is a strange mix between exhausting and exhilarating. Every day, you’re in a different place with different people. You are inspired and tested, and time slows to a weird bubble and it seems like you’ve never really done anything else but travel hours across multiple countries to play for 25 minutes day after day. The free beer and carbs bloat you and the lack of sleep becomes sort of addictive.

There are lows, of course. How to deal with the mental health challenges change depending on the day. But the high of playing and meeting new people who share similar politics and music tastes, then sleeping in their cat’s rancid shit is the reason we’ll keep doing this year after year.

Master Blaster are heading out on their next tour this week so you can check them out at a venue near you: