No one can go to a big gig right now, but a 2020 concert by The Beths has become the lockdown movie experience the country needs. How’d that happen?

It was designed to be a brilliant night. After 12 shows around the country, The Beths were in some of the best form of their lives. To close out their nationwide tour, the Auckland-based indie-rock quartet had packed Auckland’s Town Hall for their biggest headline performance yet. Already postponed by Covid-19 restrictions, it was destined to become a cathartic concert experience for 2000 fans to let their hair down after two lengthy lockdowns.

Yet nerves were high. Auckland’s two major lockdowns – in March, and again in August – were still on band members’ minds as they walked onto the venue’s imposing stage on November 6. “Halfway through the show you could get a message: ‘You need to shut down right now,'” says Elizabeth Stokes, the band’s front woman. Concerns about quickfire alert level changes were real, yet the show was a very big deal. Much was riding on it, with extra cameras and microphones rigged up around the venue to help capture The Beths’ performance in all its glory.

For two days, the band – including lead guitarist and producer Jonathan Pearce, bassist Benjamin Sinclair and drummer Tristan Deck – had painted paper mache birds to hang around the stage, giving the Town Hall a park-like vibe. They needed to fly. “If I don’t play a good show, it’s all for nothing,” says Stokes. “You’ve put it on yourself. You are the host. You’ve invited everyone there. The pressure’s on to provide a good time and make it worth the ticket price.” 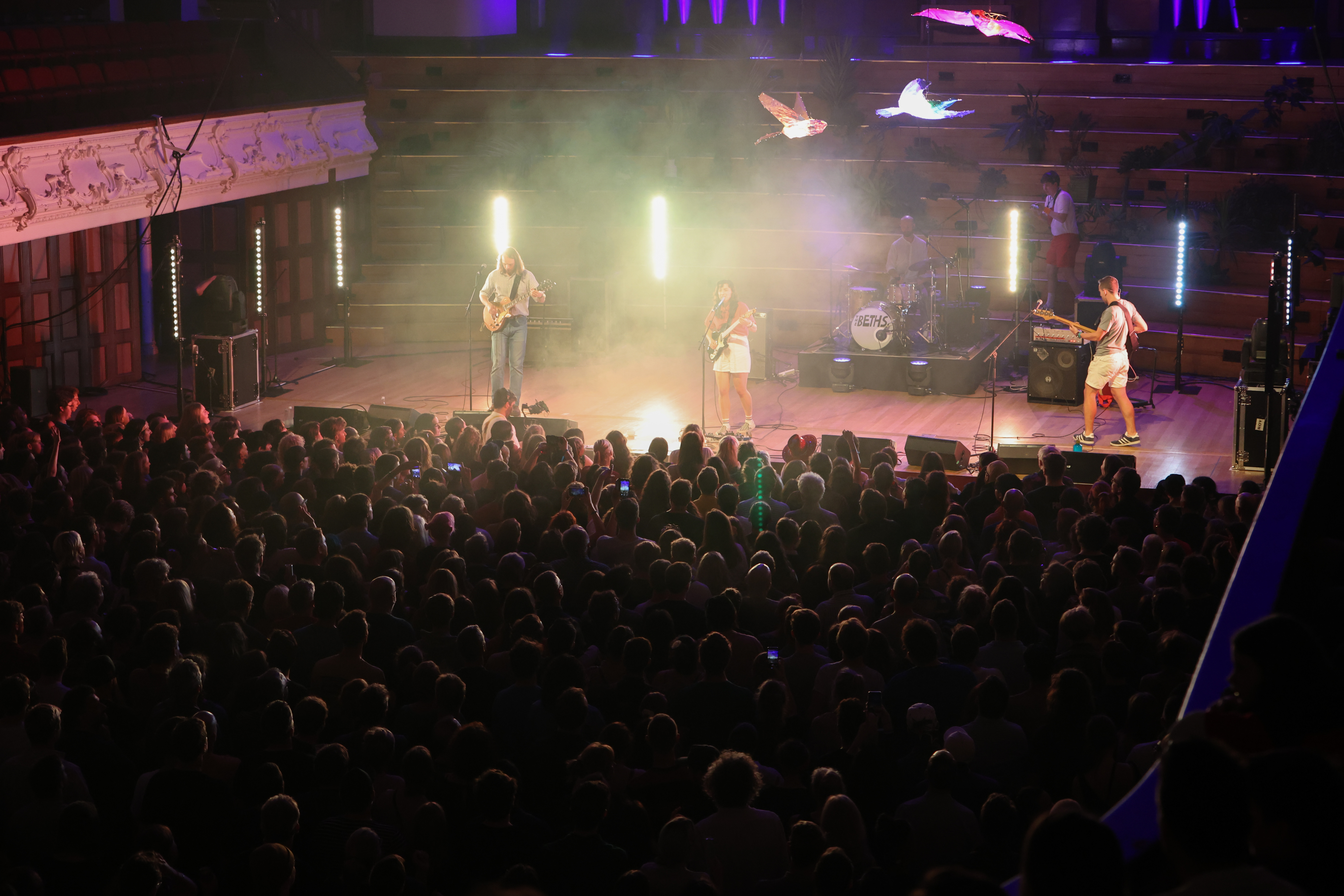 The Beths perform at the Auckland Town Hall on November 6, 2020. Photo: Getty

Spoiler alert: the show was incredible. The Beths ripped through songs from their electric debut Future Me Hates Me, as well as last year’s beloved follow-up, Jump Rope Gazers. Indie-rock anthems ‘I’m Not Getting Excited’ and ‘Dying to Believe’ rang around the venue, making the front rows bounce throughout the show. After a year of lockdowns, closed borders and concert cancellations, fans were ecstatic at experiencing a big gig again.

“That was a very easy show to have fun at,” says Pearce, Stokes’ partner and The Beths’ lead guitarist and producer who can be seen grinning as he rips through his riffs throughout the gig. “It was euphoric,” agrees Stokes, who seemed similarly ecstatic about being on stage. “It felt like everyone in the room was there with the intention of having a nice time.”

As the final notes of ‘River Run: Lvl 1’ rang around the venue, Stokes had a moment of her own. Despite the show being among the best The Beths had played, she broke down. Tears filled her eyes. It was catharsis, a release. “We played the last note of the last song, I took a deep breath and looked up and started crying,” she says. That feeling that washed over her? It was relief, and it was overwhelming. “It’s done,” she says. “We did it.”

Every single second of The Beths’ performance that night was captured on camera. Less than a year later, it’s  been turned into a movie experience and accompanying live album. Called Auckland, New Zealand, 2020, it’s a snapshot of a night that, thanks to everything that’s happened since, feels like a lifetime ago. “Yeah, it does,” agrees Pearce. “Obviously it felt pretty special when we did it in the first place (but) it turns out to feel quite significant again.”

That’s because Auckland’s back in level four lockdown, the rest of the country in level two. Now into week five, Pearce and Stokes are on a Zoom call while sitting side-by-side in their Avondale home. Sport is keeping them sane. They’re bingeing Formula 1 races and competing in hardcore table tennis battles against their flatmates. When I mention the Black Caps’ upcoming tour of Pakistan, Pearce excitedly looks up a TV schedule. “Those T20s didn’t go so good,” quips Stokes. “We’re becoming quite a sporty band eh,” nods Pearce.

It’s the ultimate irony that a cathartic post-lockdown concert experience has been turned into a magical mid-lockdown movie event. No concerts are being held in Auckland, and the rest of the country is limited to indoor gatherings of just 50. Grab a few beers, put this up on a big screen, crank up your stereo and you might forget that major concerts can’t be held right now. Heck, turn the lights off and it might even feel like you’re at the show. It wasn’t planned this way. “None of the way this has transpired was orchestrated,” says Pearce.

Yes, The Beths have made a concert film, but their movie is also jammed full of delightful snippets of tour life: grabbing chips at a petrol station, meeting a cheeky kea, teaching opening act Pickle Darling how to open one beer bottle using another. It’s come out way better than they’d hoped, so good that, post-lockdown, it might get a chance to be seen on a big screen. If that happens, it will also mark a moment in time: many concert-goers can be seen wearing masks. Along with lockdown concerns, The Beths remember their Town Hall show as a huge step up. Previously, their biggest headlining concert was at The Powerstation, and that gig was just a few months beforehand. That quickfire trajectory is remarkable. “The Town Hall was a bit of a punt for us,” admits Pearce. “You have your ‘Where do we want to be in 12 months?’ ideas in your head. (We thought) it would be nice to be able to play a show that big.” It was supposed to happen earlier, but lockdowns forced a delay. “It was actually quite a stressful time and it was a huge relief when it finally did happen,” says Pearce.

Another irony: right now, The Beths have found themselves in almost exactly the same situation. Five sold out shows planned at Whammy Bar for the end of September and beginning of October are being delayed by Auckland’s current lockdown. They’re also currently unable to go to their studio on Auckland’s K’ Rd studio to continue work on their third album. Yes, they’re halfway through a new record, just a year after Jump Rope Gazers was released. “We’re ticking away at that, from home,” says Stokes. “What else can you do?”