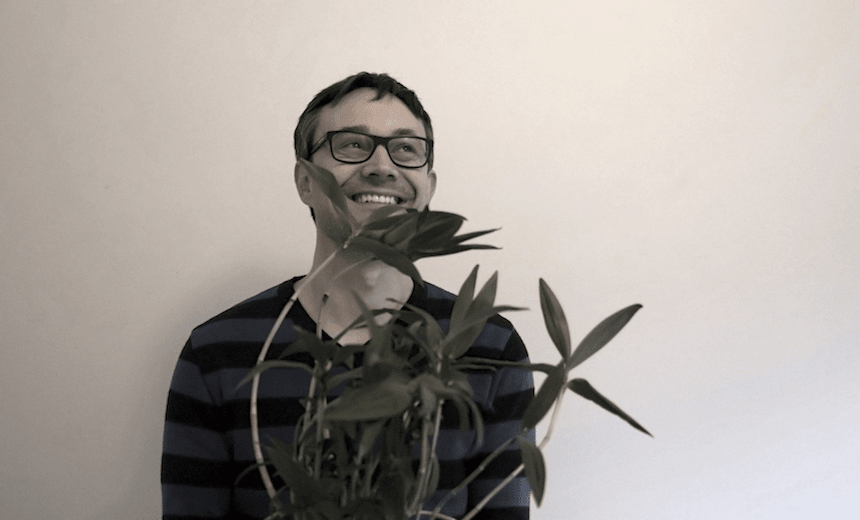 Music is just whatever sounds you’re willing to hear as music: Jet Jaguar on his eclectic new album

By Martyn Pepperell
Contributor
Made possible by

Martyn Pepperell talks to Jet Jaguar about his new album ‘Grounded’, the transportive power of field recordings, and the unreliability of memory.

“I find it hard to relate to music critics or fans who only like music they see as some kind of direct personal outpouring of that musician’s thoughts and feelings,” explains Michael Upton, the Wellington-based electronic music producer better known as Jet Jaguar. “I do love some music that’s all about a songwriter expressing what I assume they truly believe, but it just surprises me that this relatively narrow view of what’s good in music has had such traction for so long.

“In general, I love music where someone has found their own voice. Not their literal voice, but in terms of their writing or playing. To me, that’s a bit different to being either real or original. You can be doing a fantastic pastiche, and still bring your own thing to it, like that last Childish Gambino album, or Lord Echo’s [electro and disco-funk] stuff.”

For the last 21 years, Michael has pushed back against traditional folk and rock music rooted notions of authenticity, along the way releasing a cornucopia of intricate, playful and experimentally-minded electronica records, at last count, 11 EPs, and five albums.

Since he first started releasing music, Michael has spent time living in Wellington, Melbourne, and Tokyo, and made his mark everywhere he’s been. Alongside the likes of Signer, Micronism, Pitch Black, Involve Records, Kog Transmissions, and Capital Recordings, he helped usher in a wave of tasteful, and critically-lauded local electronica that stretched well beyond the borders of the D.I.Y warehouse rave and outdoor party scene it grew out of. In Australia, he engaged in collaborative music projects with his friends Shanan Holm and Stuart McDonald, as Montano and Malty Media respectively. Malty Media took things to Tokyo, where they performed to an audience of underground techno heads, mashing up footage from long running rural New Zealand TV show Country Calendar with ambient house remixes of TVNZ’s ‘Goodnight Kiwi’ closedown music.

Eventually, he returned home to Wellington where a generation of emerging beatmakers had been digesting his work and drawing inspiration from it. “There are few as valuable to local electronic music as Michael,” enthuses Alexander Green, of Wellington-based atmospheric electronica trio Groeni. “He is a vital resource and an archive of history over the last twenty-five years. He was there when 3.5-inch floppy disks were the height of technology, and Ableton Live was still ten or so years away. Long live Uncle MIDI.”

Earlier this month, Michael expanded his discography with Grounded, his fifth solo album. Released on cassette and digital formats through Australian record label DataDoor, Grounded taps into the rich traditions of musique concrete, ambient, ‘90s IDM, sample-based beats, modern dance music and beyond, fusing old musical sketches, field recordings and found sounds with meandering electronic textures, atmospheres and rhythms. It’s the strongest project he’s released in recent years, and when DataDoor boss Tim Koch heard it, he had to have it. “Michael’s music has always had a tantalising sense of depth and ambience due to some very adept use of constraint and silence,” Koch says. “Also, very importantly from a personal perspective, he has always managed to maintain an underlying sense of groove, and dare I say funk!”

Grounded might be Upton’s first release on DataDoor, but he has a long history with Koch. They both started releasing music in the late 90s, and after connecting through mailing lists and message boards, bonded over a shared interest in music, software, aesthetics and creative dynamics. Between 2000 and 2007, Koch released some of Upton’s tracks on his earlier Surgery Records, and the two have remixed for each other many times.

After self-releasing his music on Bandcamp for a few years, Upton was keen to be part of a label again. “As a listener, I follow whatever is coming out on labels like 12K, Workshop and Principe Discos as much as I follow what particular artists are up to,” he says. “So, it’s really nice to be part of someone else’s little curatorial schemes and have an album sit alongside some others.”

Mostly written over the last two years, many of the tracks on Grounded contain fragments of musical sketches from old hard drives dating back as far as 2004, and field recordings made at home and abroad. Field recording – recording sounds found in specific locations – had interested Michael since he was a teenager. “I remember buying a Walkman in the late ‘90s and recording the sounds of the games at the local spacies parlour to tape,” he recalls. “I also remember long and very pretentious conversations about composers like [John] Cage, [Edgard] Varese and [Pierre] Schaeffer. I have a memory, possibly totally wrong, of lying on a sports field in Johnsonville, and a friend telling me that [John] Cage had said music is just whatever sounds a listener is willing to listen to as music. I thought that was spot on.”

For Upton, field recordings trigger memories like how, for many, smells can take them back to a moment in vivid detail. When prompted, he offers up a few examples of places Grounded takes him to, before conceding that his recollections may be part-fact, part fiction. “’Tarawera Chorus’ is a recording before dawn at Lake Tarawera, the day after I’d run a half in the Rotorua Marathon. ‘What’ is fellow tourists shuffling around a domed crypt under the cathedral in Cadíz, Spain. The bird sounds in ‘Slo Gull’ are from a park at Évora, in central Portugal.”

“It’s great fun to weave these sounds into music,” he continues. “Repetition, both of little fragments and the recording as a whole, skews my perception of them. I still have really vivid images of the places and situations in which the recordings were made, but I kind of expect those images are totally muddled by now – which is fine! They all carry really positive associations for me.”

While he was creating Grounded, Upton regularly bounced ideas with local abstract beats producer Andrew Stewart-Loughnan, aka Group Five. The two played together in an ambient band in the 90s, and have had an ongoing musical dialogue ever since. “I think at best I’m a sounding board [for Michael],” Stewart-Loughnan offers. “[When] I compare his early drafts to [his] finished pieces, they often feel like a natural development, [or] simply a matter of polishing the sound. Though, when I’ve gone back and listened to the draft [after] having become familiar with the later version, I’ve been surprised at how much has changed. Sometimes it turns out you’ve heard an idea go from embryo to full chicken. I don’t always keep perfect track of this because Michael often invents silly impromptu file names before emailing the tracks, and my own recording keeping isn’t sterling – but on the other hand, sometimes those silly file names make it to the final release.”

After he’d written the bulk of the album, Upton began ruminating on the experience. With time and repeat listens, an overarching concept and set of feelings began to emerge. “Kind of unsurprisingly after decades of writing music, it feels like I’ve hit a point where I’m really settled in what I’m doing. It’s largely a really positive thing,” he explains. “On the flip side, there’s also a sense where having gone down one path for more than 20 years; it’d be hard for me to make a radical departure from what I have been doing and say, become a folk singer or something! I could always stop and take years to learn some other craft, but how about just continuing the thing I’ve sunk years into and still enjoy doing?”

During this period of reflection, Upton realised the word ‘grounded’ captured the duality of emotions he was feeling, and beyond that, hit on other crucial forces behind the music, from there the whole project locked together. “The process I went through, incorporating ideas and elements from well over a decade of music-making, also fitted the idea that the sounds themselves have deep roots or something.” He pauses briefly, before closing off with a wry comment, “Not roots like Six60, but you know!”

Over the last year, he’s also been bringing his music to life through a series of multimedia performances at Wellington’s Space Place Planetarium alongside video artist Graham Frost. With Graham’s visuals projected on a full-dome ceiling, and Upton playing live, they’ve hit on a winning formula, and intimate, but sold-out shows. Their Planetarium experience has been a good one, and it’s heavily informed how Upton intends to promote Grounded. “One thing doing these shows reminded me is that playing in a bar is not ideal for all types of music,” Michael concedes. “For Grounded, I’m organising listening parties instead of live shows in bars, and I’m hopeful that will be good times.”