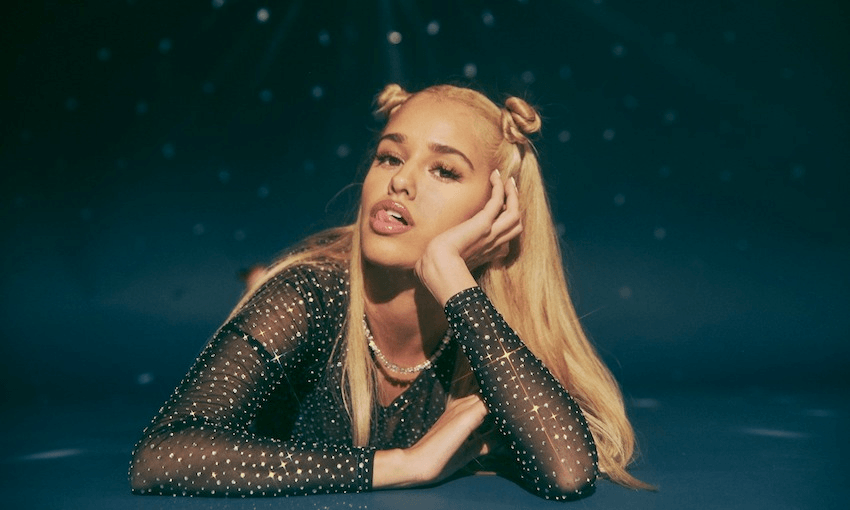 I’m the OG Tommy Genesis fangirl. It’s just a fact. Sometimes it just be like that.

I’ve loved her since she was on her dark-wave Atlanta trap kick with Father and Awful Records. I loved her when she was pulling big school-girl x military general vibes with her first album World Vision (2015). I loved her when she sang “Angelina? Is that you?” cos that’s exactly what I say to myself when I look in the mirror. I lost my shit when she said “my burqa white reflect the sun” in ‘Vamp’, a song I listened to so much that my ex-boyfriend snapped the CD. Yeah, I burnt a CD. His car was shit. I listened to ‘Hair like Water, Wavy Like the Sea’ when I visited my marae on the East Coast for the first time and felt appropriately pissy about colonisation, but also like an indigenous mermaid. Hell! I even loved her before all that when she had that terrible Tumblr song ‘Yes Daddy’ in which she was lowkey terribly good.

I’ve definitely got better taste than my 18-year-old sister Aniqueja, though I have difficulty convincing her of this fact. Everything I like she dislikes on principle. This stems back to our childhood when we would play Bratz dolls and I would emotionally manipulate her into picking dumb dolls and clothes for my personal advantage. Mum (a Libra) would make us take turns picking items and I’d lie like “omg… I love that (ugly AF) dress” and her dumbass would pick the ugly AF dress. Eventually, she caught on, and in doing so developed a distrust in my so-called “likes and dislikes.” It was a very short-term thing for me to do because in the long term I lost my influence over her as her big sister.

In our adulthoods, this mistrust and loss of influence manifests in us fighting about rappers. I swear that in 2018 it’s the female rappers who are spitting the hardest and most innovative bars. Aniqueja, a tomboy, almost exclusively listens to men. I am constantly trying to put her on to female rappers and she is stubbornly nonchalant about all of them. All of them except one… Tommy Genesis.

So I wanted to know why Tommy Genesis made the cut into Aniqueja’s cold misogynistic heart, and not the other incredible female rappers I put her on to: Rico Nasty, Asian Doll, Megan Thee Stallion, Kari Faux, Quay Dash, DreamDoll, DomMonique, BbyMutha, Leikeli47, Saweetie etc. TBH, I could fill the entire Spinoff website with current female rappers that I love. I asked her and she said “nice hair style” then, “ahahahah nah idk” then she told me “IDK I just do it ain’t that deep.”

She’s right though. Tommy’s hair alone is enough to make you stan. And her face. She has a great face. Half Tamil, half Swedish, she’s hot as. But it’s the talent and the music that makes her my lil GOAT in the making. Like Lana Del Rey said in that Complex interview where she successfully dodged the topic of cultural appropriation, “I’m all about the music.”

The album opens with ‘God Sent’, a song about being on your god-given mission. “I’ve been on my god sent/ I’ve been moving mountains….. In love with my surroundings” etc. ‘God Sent’ and the closing track, ‘Miami’ has those fake pop reggae/tragic kingdom sounds as her single ‘Lucky’ which was included in The Spinoffs Best Songs Ever back in February. I was surprised to not see ‘Lucky’ on the album, which is a shame cos it includes the best lines of all time, “look at my face/ only thing more pretty is my pussy” and the song would have fit in well with the overall sound of this record. Tommy had even told fans to expect it on the album. “Every song on the album is a different genre,” she told Noisy, “This is my No Doubt album. There’s no rules. I just made what I wanted.”

There is definitely a diversity of sounds on the album, though I wouldn’t agree that every song belongs to a different genre. The next five tracks are classic bad bitch Tommy: ‘Rainbow’, ‘Bad Boy’, ‘100 Bad,’ ‘Daddy’ and ‘Play With It.’ They all slap. They’re all hard and fun AF. They all contain Tommy’s quintessential outrageous sexy lyrics.

In ‘100 Bad’ Tommy and Charli XCX link up and I’m thrilled cos Charli XCX is my fave pop star and I feel like I literally willed this collaboration into existence. Charli puts her bratty British bitch pop on the track and smoothly references her song ‘Vroom Vroom’ which is sick as. ‘100 Bad’ also features my favourite verse on the album.“…. tongue/ up and down the stick/ in the whip real low in the schoolgirl fit he talking/ scheming/ Bonnie and Clyde/ 100 bad bitches gonna ride or die.”

The first time my friend Raife aka Bunny Holiday and I heard the single ‘Daddy’ we were like “omg shhh bitch.” We were scandalised – and trust, we are scandalous ladies so it takes a lot to make us clutch our pearls. ‘Daddy’ is composed over a series of… well, sex noises topped with lyrics like “he wanna fuck up my make up” and “he calls me Daddy’s little geisha.” It’s extra. It’s geish. It’s for the gays. It compels bad behavior. But isn’t that the power of music? To move us out of ourselves? To elevate us into higher beings than we were before?

‘Play With It’ is similar. I can’t even quote it. Based on the title, only one can only imagine what she might be speaking of. ‘Rainbow’ is hard and sexy too, but also motivational/aspirational with lines like “takin’ the bag out (stack)/ never gon’ fade out” and the hook “I’ve been lookin’ for the rainbow / Gold teeth, on my wrists is pink gold.” And I mean, this song is called ‘Rainbow’ meaning it’s also out here for the LGBTQ community.

My favourite track on this album, however, is ‘Bad Boy.’ The beat reminds me of boy-racer rap circa 2005; the best period in music history. It also kind of reminds me of ‘Bad Girls’ by MIA and ‘Buttons’ by the Pussycat Dolls. The lyrics are weird as; “I’m tired and my bitches are weary / there’s a rope around my pussy just to hold me and kiss me.” Simply put… it bumps.

The next four songs in a row, Tommy takes a break from spitting and sings instead, and even though I fell for Tommy Genesis the hardass miniskirted rapper, I’m not gonna limit her by being self-righteous about it obviously. I’m a good stan and these songs are cute.

‘You Know Me’ is a trappish flexy song about curving boys, but it’s still soft and sweet somehow. That’s kind of Tommy’s whole vibe; angelic bad girl. “I got needs, so many boys textin’ / You know me, I ain’t even really flexin’.” On this track, she also declares “I’m not straight/ There’s nothin’ you can do for me/ I don’t want your love, sedation or your jewellery” reminding everyone that she is an independent gay icon.

‘Naughty’ ft Empress Of, is a surprising favourite of the album. Totally not what I was expecting based on the title. It weirdly got me emotional and right in my feelings “I like this boy, he’s full of shit / He knows I know that it’s not love/ I won’t look back I’ll keep on walking/ Boy, I know that it’s not enough/ it’s naughty.”

‘Drive’ is all g. Sort of downbuzz western driving through a dessert with a bit of heartbreak sort of thing. “If you call, I’ll turn this thing around / If you want me back, you know I’m down.” ‘It’s Ok’ is sort of meh. I could do without TBH. The chord progressions sound like a Daughter song circa 2012-2013 aka the worst time for music. It’s the track I’m most likely to skip.

Thankfully the next track on the album, however, is the lead single, ‘Tommy’. ‘Tommy’ came out eons ago but still slaps. It’s withstood the test of time. It’s a Tommy Genesis classic. It’s hype AF. And yeah I wanna picture with Tommy.

The closing track is ‘Miami’. It’s sunny and sweet. It’s hot and tropical. It’s a good song to swelter to in summer. I mean, “I’m feeling pretty (all done up)/ I’m in my Fendi (The one you bought me)/
I’m by the poolside (livin’ up)/ Don’t need a bad vibe (please don’t push your luck with me)” is a huge mood for the holidays right? On the track, she also sings “I’m in the sunshine/ my future shine shine….” and she right though…

I asked my sister again what it is about Tommy and her music that compelled her to stan despite her better anti-me judgement. She didn’t respond cos she’s sad like that. I had to make my own conclusions. Perhaps it’s because Tommy represents duality; hard and soft, masc and femme, both the daddy and daddy’s little geisha. Of course, the music is undeniably tight; the beats are sick, the lyrics are clever, surprising, and erotically charged. But above all, what I think really drew me to her and what I think is the big mood of Tommy Genesis as a whole is her autonomy. In a society that constantly shackles women with behavioural rules it’s absolutely intoxicating to experience a young LGBTQ, Woman of Colour being hot, cocky and extra AF.