Before his passing in 2020, Weta frontman Aaron Tokona initiated the vinyl reissue of the band’s sole album Geographica. Released last week, it’s a poignant reminder that the band were on the cusp of cracking Australia 20 years ago.


Rock bands in Australia reside at one of two poles, according to Weta drummer Clinton den Heyer. The uncomplicated binary system used by Australian fans means acts are either venerated as a bloody legend, or condemned to the icy wastelands of nothingness.

New arrivals from across the Tasman customarily do their time in that gulag, and Weta were no exception when they moved to Melbourne in mid-1999.

“For the longest time, we were nothing,” den Heyer remembers. “We played to so many empty rooms. Melbourne at the time was the place to be if you were a live, performing rock-oriented band, and it was a very make-or-break kind of environment.”

And yet, just over a year later Weta were on the verge of cracking the tough Australian market, and transcending to bloody legend status.

Then, with Geographica already charting in New Zealand, they abruptly called it a day due to frontman Aaron Tokona’s fragile mental health and the band’s general state of fatigue. And the album wasn’t released in Australia.

This left a lot of unanswered questions, and a lingering sense of regret. The reissue of the album on vinyl this week enhances that feeling, as two decades on Geographica remains a powerful statement, and a huge part of Tokona’s legacy following his death in June 2020. 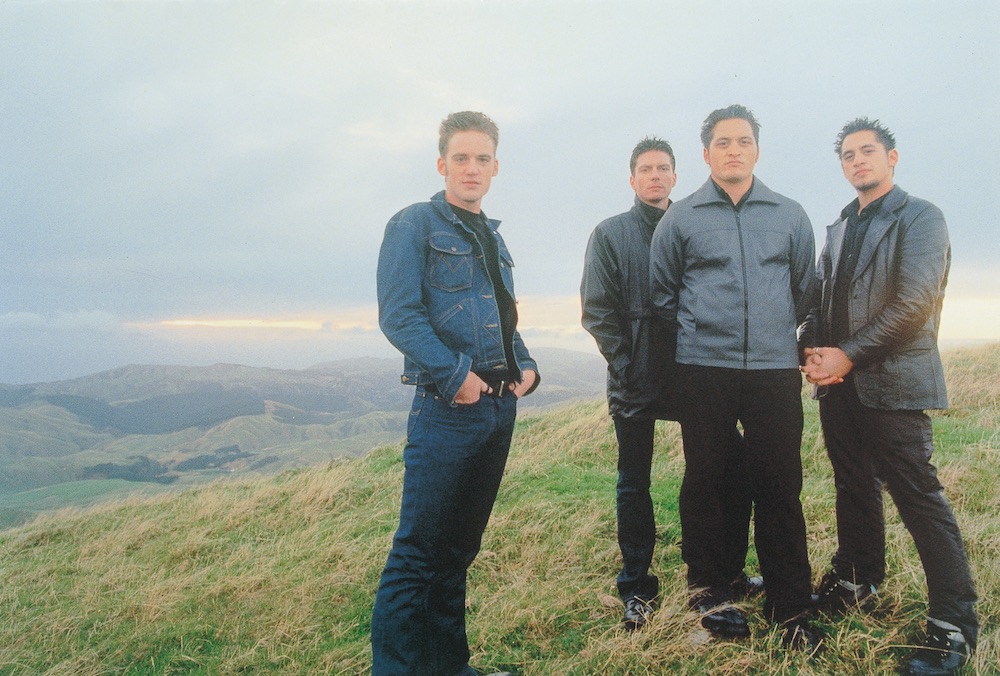 From the moment they stepped, hungover, from the plane in Melbourne in 1999, it became obvious Weta was ill-prepared for fame and success.

Having gained a loyal audience in Wellington since forming in 1995, they’d attracted the interest of Dan Hennessy, from Australia’s Aloha Management company. When he was employed as A&R manager by Warner Music, Weta were signed to the label in Australia – a fast track to achieving their rock’n’roll dreams.

But moving across the ditch to pursue those dreams was a scary proposition for the Tokona brothers, den Heyer, and guitarist Gabriel Atkinson – all in their early 20s.

“We were young naive dudes,” den Heyer says. “We arrived at Melbourne airport at about 8 o’clock at night, and we had all our gear and all of us, and no transport. I realised how under-resourced we were, and how much we really hadn’t thought a lot of this stuff through.”

With a lot of support from fellow Wellingtonians Shihad, who’d made the same move several months earlier, Weta eventually found their feet in Melbourne. It was a period of adapt-or-die, as the band performed to empty rooms, and sometimes early in the evening to families eating dinner.

This was a difficult scenario for a loud, driving rock band who were used to playing small, sweaty rooms like Wellington’s Hole in the Wall. “Sometimes we would just not do the set, and Aaron would pull out his guitar and just do covers,” bassist Clinton Tokona says.

“It pissed me off at the time,” den Heyer recalls. “But if I was the frontman every night, I’d want a change of approach. And I think that in part led into what turned out to be the Geographica record.”

Punishing though it could be, the grind of touring paid dividends, with Weta becoming well-honed in the live arena. Soon they were supporting international touring acts, and Australian rock royalty including Silverchair and Powderfinger.

“It became very serious very quickly,” Clinton Tokona says. “It was non-stop touring, non-stop writing, non-stop rehearsing, then recording the album. It was a blast, going from being in a small city like Wellington, to being in an environment where you were able to tour without having to worry about finding a job and having money for rent.” 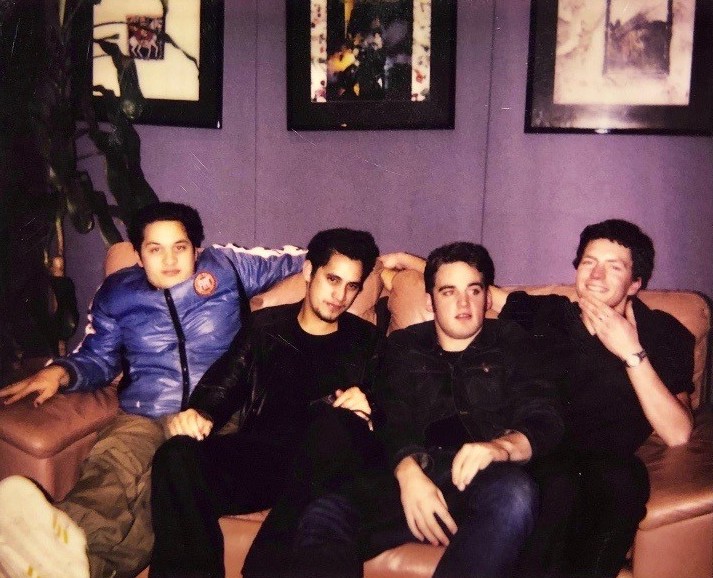 In the studio, Melbourne (supplied)

Aiding Weta’s enviable rise was the fact they finally had a decent record of their evolving songwriting abilities.

The four song Natural Compression EP was released in August 1999, with ‘Got the Ju’ and ‘Let It Go’ in particular capturing their dynamic rock sound. Recorded by Shihad’s Tom Larkin in Wellington, the EP represented their most satisfying studio experience yet.

“After we walked out with the mixes of Natural Compression, we actually felt like we could perform in the studio for the first time,” den Heyer says. “It was a difference in confidence where we felt like we could take on bigger things.”

That confidence was eventually taken into the recording of Geographica in 2000 – but not before a false start with Jonathan Burnside, who’d worked with Melvins, Faith No More, Clutch, and others.

The American producer endeavoured to record Weta using ProTools in his Melbourne living room. With no personal connection, no pre-production, and a process that didn’t suit the band, it was an experience den Heyer describes as being like a “really bad blind date”.

However, the sessions did produce a version of the song ‘So Far, So Close’ that Weta have come to appreciate.

A subsequent meeting with English producer Steve James, whose previous credits included The Clash, Sex Pistols, and The Jam, was in stark contrast to their experience with Burnside.

“He was like a breath of fresh air the moment we met him,” den Heyer says. “We’d done a Friday night headlining at The Espy, with a really great turnout, and Steve James was there. He just felt right the moment we met him. Aaron connected with him really quickly, and they spent a lot of time together that night.”

That connection was soon carried over into Sing Sing Recording Studios in Melbourne. With an initial budget of $100,000 from Warner Music, work began on Geographica.

Aaron Tokona appeared to be a happy man when I spoke to him prior to Geographica’s September 2000 release in New Zealand.

The magnetic frontman was effusive in his praise of James, and clearly excited about what they’d created together. Although belying the bipolar disorder he was suffering from, his enthusiasm was genuine.

James had advocated a direct approach to recording, capturing just a few takes of each song on analogue tape – a traditional method that suited Weta.

The producer also initiated a comprehensive pre-production process that guided the recording sessions, and he’d introduced ideas around bold new directions for the songs to traverse.The band embraced it all

“We felt good about it as a band,” den Heyer says. “We were communicating really well and playing well as a band together, so it made sense to try new things. It was a safe environment.”

Says Clinton Tokona: “The album that was released was because of the relationship between Aaron and Steve James. Aaron was the main songwriter, and you have to have faith in your members, and your leader. Sometimes it was strange hearing a piano with the vocals on top, but the final result when we were able to hear it in the mastering room was beautiful.”

At the time, Aaron Tokona told me that many of the songs were about specific people in his life, and he’d struggled to overcome his inhibitions to write them. Tokona had worked hard to say what he meant, and to really mean it.

The effort put into the entire process is evident across Geographica, a quality set of straight ahead rock and brooding ballads refracted through an autumnal lens.

Another reflection of the wholehearted investment of those involved was the final cost of the album. The initial $100,00 budget had blown out to a rumoured $400,000, renegotiated between James and Hennessy. 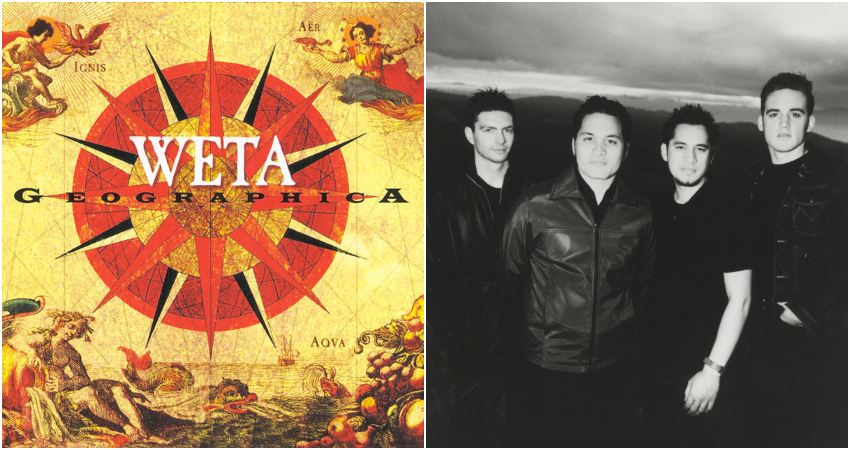 The album Geographica, and a band publicity shot from the time of its release (supplied)

Despite having an album that they knew was good, Weta had no expectations about how it would be received. ‘Calling On’ was released as a single in August 2000, charting briefly in New Zealand, and being picked up by Australia’s dominant rock radio station Triple M.

“That was an indication it was going to be a really big rock record in Australia,” den Heyer says. “That took us all by surprise. It’s just a shame we never got to find out.”

Weta’s swansong came during the November 2000 Geographica tour in New Zealand, where they were joined by Shihad and Fur Patrol. The bipolar disorder that Aaron Tokona had been diagnosed with three years earlier was making it impossible for him to live the life of an itinerant rock musician.

Following a conversation in a New Plymouth takeaway shop, the band played their final show in Nelson.

“Things were getting very difficult for me as I began to get ill again,” Tokona told me. “I didn’t understand what was happening to me at the time, and upon reflection neither did our management.”

“I wasn’t surprised when he made the call,” den Heyer says. “But it was right at that time that all of the hard work was starting to pay off. I was bitterly disappointed. I thought it was such a shame, but what can you do about it?”

As a consequence of the split, Warner Music Australia cut their losses and chose not to release Geographica in Australia. “It’s disappointing because it’s such a great record, and they had such great potential, but bands break up all the time in this industry,” the band’s A&R man Dan Hennessy said at the time.

Before he passed away following a heart attack last year, Aaron Tokona and Gabriel Atkinson had initiated the idea of a 20th anniversary Geographica vinyl reissue.

Alongside his other musical output, including AHoriBuzz and Cairo Knife Fight, the album is a vital chapter of Tokona’s legacy. As he told me when it was first released, it was a record that he knew would still make him proud years later.

“I’m just happy that we’ve made something that I could still listen to 20 years down the track and still appreciate, and still make a connection with that time. Whether it sells or not not doesn’t really matter. It’s not up to me any more; once it’s out there it’s someone else’s music.”

Among them is National Party MP Chris Bishop, a long time Weta fan. He saw the band on that final tour in 2000, and Geographica remains one of his favourite albums.

“Maybe your music tastes are meant to evolve as you get older,” Bishop says. “But when I was 17 I liked big guitars with sophisticated melodies… and I still do now. The album still sounds pretty fresh to me now. These guys were serious songwriters.”

The reissue of Weta’s Geographica is out now on double vinyl.