Six60: Till the Lights Go Out tracks the wildly successful Dunedin band’s evolution from three guitars at UniCol to selling out Western Springs.

I was at 660 Castle St some time around the turn of the last decade when I first saw Matiu Walters. Someone pointed him out to me: solemn-looking, standing on a box under a dim purple light. “That’s the lead singer of Six60,” she said. “Oh shit,” I said. The clock struck midnight and cops started filing into the flat, funnelling us kids out onto the road and away from our gods. Rumour had it the Dunedin City Council had shipped in police from Christchurch, just because they heard Six60 was in town.

Now, the DCC is helping fund a movie about the band. Six60: Till the Lights Go Out is a chronological journey through Six60’s’ 14-year history. It opens in 2006, at UniCol in Dunedin. The bandmates come from a wide range of backgrounds: the supercity of Auckland, the quiet pastures of Dannevirke, and the ganglands of Maraenui. Chris Mac is from Australia. But Six60 belongs to Dunedin.

Director Julia Parnell has managed to find footage from almost every year since the band’s inception. There’s video of the original UniCol trio – Walters, Ji Fraser, and Hoani Matenga – jamming in their college rooms. We watch a young Matenga and Walters play on the rugby team, where Walters first gained the confidence to sing in public.

There’s footage of the boys before they had an official band name, with Eli Paewai on drums, playing covers at a flat party. We see Fraser glaring at newcomer Marlon Gerbes setting up his synth, and there’s a montage of pre-Six60 Mac being really punk. There’s footage of the devastating 2016 balcony collapse.

At every stage of the band’s development, there’s video. It speaks to an early ambition; even when they didn’t think they’d make it as a band, they obviously hoped they would, and they wanted a record of that journey. Earlier this year, Six60 joined the ranks of ZZ Top, Bob Marley and David Bowie when they sold out Western Springs Stadium in Auckland. They’re the first New Zealand band to do it. As Parnell’s film makes clear, this was always the goal. 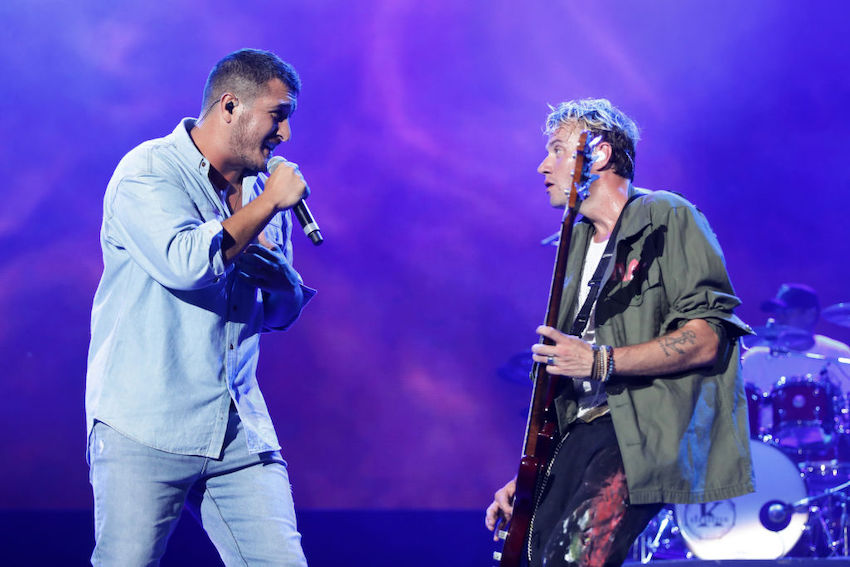 Ambition usually tears bands apart, but Parnell’s film shows it’s the main thing keeping Six60 together. When everyone’s got a Type A personality, no one’s going to be the first to quit. Parnell delves into their backgrounds and reveals that every single one is driven by community. Mac comes from the church, Paewai was raised by his extended family, Gerbes’ dad was a founding member of the Mongrel Mob; every member of Six60 knows they’re more successful together than apart. Ambition holds the band in place even when its members hate each other.

The flip side of that ambition is that critics hated them too. Dunedin’s music scene is traditionally alternative, but Six60 was on the outside even of that. Their music might have been popular, but no one in the industry wanted them. It was horrifying to them that a bunch of scarfies who couldn’t read music would dare to win six Tuis. They played in broad daylight, and at Union Hall, and never once gazed at their shoes.

They were perfect fodder for critics, who were excited to find a band they could universally agree to shit on. In one uncomfortable scene, Walters reads a 2012 Simon Sweetman column about the band where he calls it “music for people who don’t like music”.

The camera cuts to Spinoff managing editor Duncan Greive, a “penitent critic”. Parnell comes back to him a few times throughout the film, asking him to explain why music critics hated Six60. This is the main point of the celebrity interviews in Parnell’s film: Tiki Taane says he got a lot of flack for working with the band. Stan Walker and Kanoa Lloyd suggest that much of the criticism probably comes down to racism and classism. It’s hard to believe every critic has changed their mind about Six60, and a glaring omission from the interview lineup is someone who still doesn’t like them.

The film doesn’t respond to the crux of what critics were asking: why do people love Six60? “I couldn’t tell you what a Six60 fan looks like,” says Lloyd. The camera shows the masses streaming into Western Springs last year. Every demographic is represented. They never say what it is that draws them all in. No one has ever explained to me why they like Six60, and I hoped this movie would.

When I first saw them play, I’d heard maybe one of their songs in my life (guess which one). Despite this terrible and unpatriotic history, I managed to sing along to the whole set. That, I think, is the key to the band’s success; and it might be the one thing that wasn’t filmed. Walters and Gerbes write deep-ish lyrics, but they’re also really predictable. They write anthems, not ballads.

The movie doesn’t tell us what genre the band is (dance roots?), or exactly why people froth it so hard. But what I can tell you is when the stage lights go on, they tap into some kind of ancestral shared memory of broken glass and sobbing to your parents on the phone and knowing everything bad will end, one day.

Parnell’s film hits the same notes as the band: community, bright lights, and overcoming dark moments. At the end of the Auckland premiere, the audience of music industry professionals and influencers gave it a standing ovation. Six60 doesn’t need their approval to succeed, but it’s cool to finally see it.

Six60: Till the Lights Go Out is out in cinemas nationwide today.