On Sunday, Stuff published a months-long investigation by Alison Mau detailing allegations of harassment and exploitation within the local music industry.

The piece, ‘Music industry professionals demand change after speaking out about its dark side’, includes allegations of inappropriate behaviour and abuse of power by male artists, international acts and executives; the men named are Scott Maclachlan, the man who ‘discovered’ Lorde, and Paul McKessar, who manages Benee.

These people are my heroes. They have had the strength and guts to stand up and speak about their negative experiences in the New Zealand music industry. They have risked so much.

I had heard whispers of Alison Mau’s feature in early December. I was worried – about how the story would be told, who would be named, and whether people would believe them.

My own experience of story similar to this was the fallout from a piece about sexual harassment at 95bFM written by Duncan Greive for Metro magazine in 2011 (Duncan is now the founder and managing editor of The Spinoff). I had been working for student radio for 10 years and at the time was hosting my daily Morning Glory show for bFM, so declined to be interviewed for Duncan’s story or to comment.

Because the article didn’t include the names of accusers, the accused (who still worked at the station) thought it was me who was quoted throughout and turned on me.

What made it worse was that there was no acknowledgement of the story, no meeting or discussion with any staff. It was swept under the carpet; the piece was to be seen as lies. Duncan was banned from bFM.

That was 10 years ago – and I am so grateful that today this Stuff story will not be swept under the carpet. Things have changed, thankfully.

Since the article was published, Warner Music fired Scott Maclachlan, with immediate effect.

CRS, the management company that Paul McKessar is part of, made a statement via Instagram.

Paul McKessar himself made a statement on Instagram apologising for “crossing professional boundaries” (he later deleted his Instagram account), and handed back his Aotearoa Music Awards Manager of the Year 2020 award.

‍He later emailed an apology to musician Lydia Cole, one of those who spoke to Alison Mau for the Stuff story. 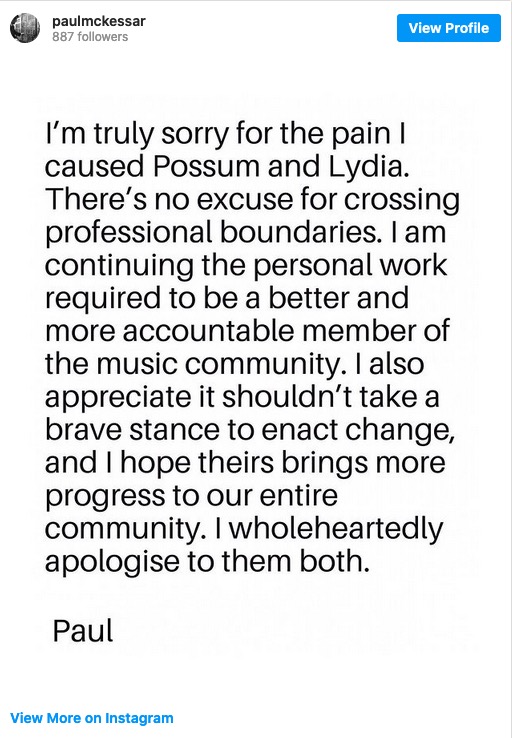 Various music industry figures also commented on the story and allegations via their social platforms.

Anna Coddington wrote, “If I sound angry and aunty status it’s because I am”.

“Whatever the norms of the music industry have been in your experience to date, know that the behaviours in this article are fucking unacceptable. If you are a young, talented female or non-binary person trying to succeed in music you don’t owe anyone ANYTHING but your talent, some boring promotional time, and the agreed split of your earrings. You don’t owe anyone friendship, smiles, flirty convos, cool hairstyles, a slim body, a positive attitude, compliments or whatever.

“If you’re an older male in the industry – see above. These talented young people owe you shit, and they’re not into you. Keep your flirty feelings to yourself just don’t even start it. Be professional ffs. FFS!!!!”

In an Instagram story, Tami Neilson wrote, “100% enraged. 0% surprised. We’ll all be watching to see who remains silent and who actually implements this change – because it shouldn’t be on the shoulders of the people who have bravely spoken up.”

She followed it with an Instagram post that asked, “Is it just me or is the silence of our music community deafening today?”

On Monday afternoon, Possum Plows, who spoke to Stuff of their experience with Paul McKessar, shared further comment on Twitter.

“I so desperately don’t want this to be a story that fades away in a matter of days,” they wrote. “We need meaningful and lasting change to the music industry in Aotearoa.”

the music industry in aotearoa needs to step up and do better pic.twitter.com/vvhx8poSsw

I have been following the Instagram account @BeneathTheGlassCeiling, which documents “real life experiences working beneath the glass ceiling of Australia’s music industry”. It is an anonymous account that seems to be linked to stories mostly to do with Sony Music Australia, but many of the stories it shares are so familiar to anyone working in the music industry here.

Working in music often means you are the first person at the event, and the last. It is your role to create relationships with artists and media. Long lunches, evening gigs and events are frequent – along with hangovers. It can be fun and very rock and roll.

But it can also be awkward and feel dangerous when delivering an artist back to their hotel late at night, especially if that artist or group of men is very drunk and frisky. I was never warned of this behaviour or had any conversations about how to deal with these sorts of situations. My classic way of handling this was to laugh it off and run as fast as I could back to the car.

I was also never warned what to do if someone in a very senior position flirts inappropriately and pulls you to sit on his lap in front of everybody.

This particular man got his comeuppance when he sneaked into my hotel room one night and mistook someone else’s bed for mine. Lights were turned on and he was caught, protesting that he “just wanted a cuddle”. Everybody thought this was very funny, him being caught trying to sneak into my bed; I was relieved.

The reason why I admire these people for being brave and speaking out is because it is hard to.

In previous roles, when I was younger, I have complained to management about the inappropriate behaviour of men in more senior positions than me. Every single time (there were three instances) I was told that due to them being a senior staff member, I – the junior and thus easy to replace – would have to leave if I was unhappy.

In December 2020, a report from Massey University was released detailing gender inequality in the music industry.

More than two-thirds of women and non-binary people (70%) in the music community reported experiencing bias, disadvantage or discrimination based on their gender – seven times the rate of men (10%).

During the time the report was being written, an organisation called Soundcheck was created with the aim of developing and growing our industry through a safe and inclusive culture in the music community.

Creating an organisation like this is fantastic, and I imagine takes a lot of time and care. So many people support this organisation and think it’s fantastic, but what would things look like if this was established 10 years ago or even 20?

I love working in and alongside the music industry, and there are so many great humans that do fantastic work and treat everyone with respect. But some do not.

This behaviour has been happening for years, not only in the music industry, and it needs to be brought to attention, taken seriously and stopped.

Today I have been asking myself, how can we make change?

How do we protect the amazing teenagers who attended Aotearoa Girls Rock Camp last week? A camp full of 40 young women and non-binary people, including my daughter, wanting to enter the music industry and eager to impress.

How do I ensure that the industry is a safer, fairer and more transparent one than it was for those of my generation?

It should not be about educating women about how to avoid situations or behaviours. We need to educate the men.

Where to go for help or information about sexual harm:

Male Survivors Aotearoa: Support for the well-being of male survivors of sexual abuse