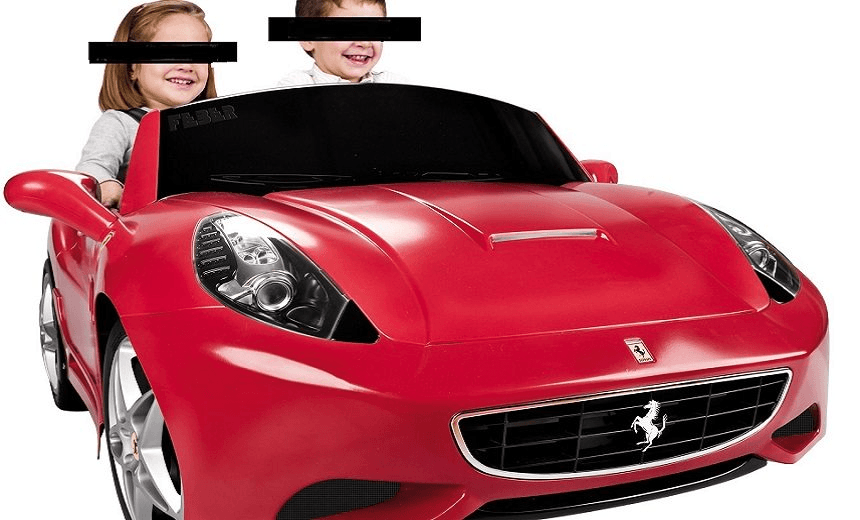 Faces obscured to protect the guilty

Faces obscured to protect the guilty

There are plenty of things that children love and parents hate: Barney the Dinosaur, mud puddles, getting up at the crack of dawn. But that’s nothing compared to the loathing Emily Writes has for those ride-on toy cars for children.

Hate is a strong word. But I really feel strong feelings – feelings that are hateful – toward those motorised cars at the park.

If you’re thinking right now, is she really going to write a whole column about those cars?

Because those literally mother fucking motorised cars at my kid’s favourite park are killing me. Some entrepreneurial soul who hates parents has bought a bunch of little cars and is charging $1 a minute for kids to drive around in them. Yes, that’s right one fucking dollar per fucking minute to ride the fuckers. And the steering is garbage and they will not even go one second over your minute. It’s the worst child’s activity ever.

Don’t believe me? Let me tell you of the horror.

You are walking Mary Poppins-like to the park with your children.

They are holding your hand and saying things like “mama you are so loving and we are so thankful for all that you do for us. You are truly an excellent parent who provides us with boundaries that we are grateful for.”

People are staring at you and smiling and saying “What a good mother. What darling children she has.”

Couples are saying “Gosh, look at that mother and her calm children – should we have children? Yes we should.” And they’re gazing in wonder at you and at each other and then rushing off to their cars to bang because their desire to procreate is so strong because your life as a parent is SO DREAMY.

The children say – “Mother, may we play on the slide while you catch up on the latest Buzzfeed list on Beyonce’s pregnancy?”

You sit under a tree, pull out your phone, prepare yourself to spend time with the Queen, and then:

THEY WILL SEE THOSE FUCKING CARS.

“MAAAAAMA!!!” – They scream. The scream is terrifying. Across the park everyone stops and looks at you. The two-year-old makes a dash for the cars and you try to get up but you’re old and your pelvic floor is not what it used to be because of the two-year-old. The two-year-old knows this. They know how to exploit your weaknesses.

In their sprint to the cars they knock over babies, toddlers, teenagers, grown men, two police officers, and a 97-year-old grandmother holding four lattes.

You yell to your four-year-old “RUN AFTER THEM JESUS CHRIST DO IT I’LL BUY YOU A BIKE JUST GET THE LITTLE” and then you realise people are watching so you quickly say “Please could you please help mama get your sweet baby sibling who isn’t currently possessed by the devil”.

The four-year-old turns toward you with a bored look on their face and then they too see the cars.

They race toward their sibling knocking the elderly woman to her knees again.

At this point you realise your toddler is in a car and the owner of these barbaric parent torture devices is now saying to your toddler that they can have a turn – while pointing to the $1 a minute sign.

You see a broken woman next to you hand over her rent money for the week to placate her three under three who have grown horns in the presence of the cars. Their skin seems to be developing snake-like scales and one of them turns their head 360 degrees. Their eyes are black.

“I’ve got no money” you say to your children who are now strangling each other. The first one to black out will lose the front-seat in the car that you are definitely not paying for.

“MAMA CAR!” the toddler screams at you with a defiance that is actually quite terrifying.

You hold your ground. “No money” you say.

The toddler knows only a few words – they’re the absolute basics. But now they start screaming at terrified onlookers “MUN NEY MUN NEEEEY MUN NEEEEY MUUUUN NEEEY GIVE ME MONEY OR YOU WILL LIVE TO REGRET IT I WILL HURT YOU FEAR ME I WILL DESTROY EVERYTHING YOU LOVE!”

You try to pick them up and they throw themselves onto the grass and give an Oscar winning performance. People are staring at this flailing child who is acting like you just killed their dog.

You pick them up and they throw the biggest tantrum of their life. Car alarms are set off and every dog in the region begins barking. The four-year-old regains consciousness after being choked by the youngest and leaps into the car with a satisfied smile.

“OUT NOW” you screech and then immediately feel guilty because everyone in the entire country is now watching you not handle this situation. You turn and see a father attempting to barter with the owner of the Hell Circle “please” he says, silent tears falling down his face as he presses his watch into her hand – “It’s been through eight generations”. The owner holds the watch to the light. “Three minutes” they say. The man’s child races off as he falls to the floor in despair.

“I HATE YOU” a child screams at their parent. Gosh, what kind of kid says that to their parent you think just in time for your child to start screaming it at you. You get the toddler to where you set up a blanket to eat your loving family lunch for loving families. HERE EAT THIS you say handing them a carrot. They look at you as if you have just handed them a human shit. Fine, you say – pulling out a sugared treat with sugar on the sugar.

They look at you as if to say – “you know I have to do this” – and in one swift movement they leap up and race toward the cars.

You scoop them up before they get to the car and they scream directly into your ear – you hear something pop and then: Blessed silence. Yes, you’re in pain, but it’s worth it not to hear your children anymore.

You pull them down onto the blanket, sweating and cursing as you hand them a lamington dipped in red cordial coated in MSG.

They point behind you, you turn and by the time you turn back they are gone again.

You run after them toward a car and find your oldest child being pulled from another car by the owner. You can’t hear anything so you don’t know what they’re saying. You’re too tired to care. You also can’t breathe because this is the most exercise you’ve done in four years.

You see a mother pull her wedding ring from her finger. She sobs as she swaps it for six minutes.

Her child screams FUCK YOU as it tears off into the distance in a toy Maserati.

You see a couple walking toward the cars, you hear their accent and you know they’re not from around here. “Well, it is expensive but we are on holiday” you hear one say. You want to help them but you’re frozen, your child kicked you in the head and you have a mild concussion. “It’s been such a nice day, the kids have been so good let’s give them a treat” they say.

“Is this the bystander effect?” You wonder as you lay prone on the dirt. You want to tell them but it’s too late.

Then the car their kids are in stops working. Their children begin screaming. The parent tries to break them up and one child pulls out a sharpened stick. The parent backs away from the shiv as the other child revvs the engine.

Suddenly the owner of the cars walks over and says “Times up”.

In slow motion you watch as the riot begins.

You are sitting on top of your toddler who has now fallen asleep from exhaustion after running the equivalent of 160km between the picnic blanket and the cars. You last saw your oldest child mugging the elderly ice cream shop owner.

You’re too tired to even register that most of the cars are on fire now. A mother falls down beside you and pulls from her bag a bottle of gin. You drink it straight as you watch the park fill with smoke. The children have covered their bodies with red dirt. They have dismantled the playground and are using parts of the slide to beat each other.

A father joins you. He is missing a leg but he is too shell shocked to notice. “The kids” he says. “The kids have the owner”.

“Should we help them?” he whimpers.

“They brought this on themselves” you say as you take a swig of the gin.

They brought this on themselves.