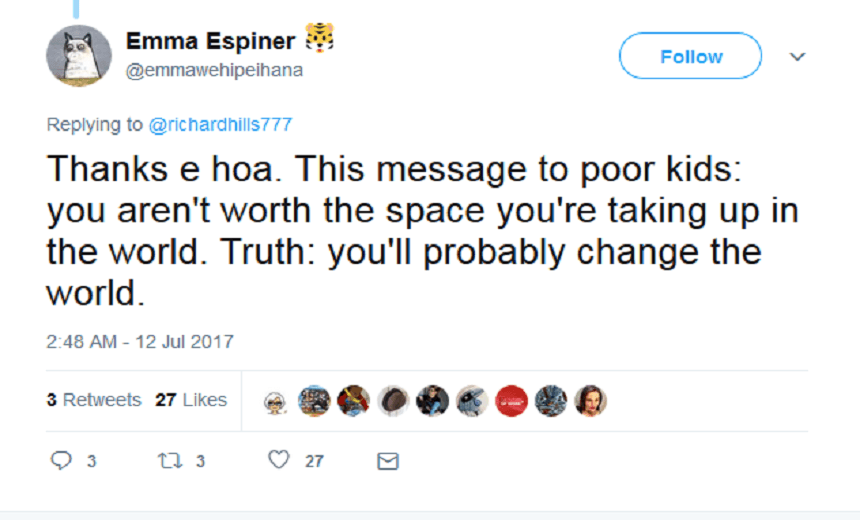 Thanks ACT, for revealing the truth about low-income parents

David Seymour and the ACT Party believe that only parents who are wealthy should be able to have children. Many, many parents, including Dr Jess Berentson-Shaw, disagree.

I want to thank David Seymour and ACT for revealing a truth about parents with his recent statements about giving money to low income families. It is perhaps not the truth he thought he was revealing, but a truth nonetheless.

To be fair to David, before I had kids I had some pretty weird ideas about what children, and parenting especially, involved. Honestly I was a bit of a dick about parents then. I laugh a bit sheepishly about that now.

Of course not everyone need become a parent to learn about the realities of parenting. Another way to learn about what you are talking about is to read about it.  I am not a parent living on a low-income, and before I read a single piece of research about low-income families I probably had some pretty funny ideas about money and how it affected families too. A bit of unbiased research soon corrected them.

Another way to learn about parenting – or just a life different from my own apart from living it myself – is to listen to the stories of people who live that life, instead of, I don’t know, drawing on myths and misinformation and my own ‘inner creativity’. Rather wonderfully, David’s remarks in various media outlets have created an opportunity for him and other people who have not parented on a low income to learn about how people do just that.

What I have read over the last few days are some beautiful, complex and amazing stories about parents doing the hard yards to raise children who have grown into complex, funny, clever and valued human beings and it is a wonderful truth indeed.

What these stories draw out is what the research tells us, that parents on low incomes are like everyone else. They want the best for their children and will do whatever they can to make their children’s lives positive.

One thing to note from the stories from the 1970s and 80s is the support many of these parents, particularly sole women parents, drew upon while doing this great job. A universal family benefit in some cases, training allowances, free tertiary education, accommodation and food that was actually affordable, and a system of benefit payments that ensured children did not barely survive, but thrived.

The situation today has changed dramatically for parents on low incomes. House prices as a proportion of income have skyrocketed for everyone, but most for those on the lowest incomes, wages have not kept up, food, especially fresh unprocessed food is much more expensive, transport costs are up and travel times longer, work is more insecure, and many of the supports that allowed low income families to bounce up (instead of fall to the ground with a thud) have been removed by people in various governments. We see these impacts play out in the data on family poverty.

The benefit cuts made by Ruth Richardson and the National Government in 1991, tipped many families into poverty, as you can see in the figure below. These cuts came on top large scale deregulation of many industries put in place by people in the previous Labour government. The deregulation was so rapid that mass unemployment was triggered and those hit hardest were Māori and Pacific communities who formed the backbone of our industry and agricultural sector. What we can also see from the figure below is that the introduction of Working for Families (which let families keep more of their income) helped with rates of child poverty, it did not however, reverse the trend because it gives the least assistance to parents and kids on the lowest incomes.

In the longitudinal Survey of Family Income and Employment (SoFIE) we found that over half of all families in New Zealand go into a year of income poverty after the birth of a child and around a third will stay there for three years. Providing our country with the next generation of workers is a significant public service that also comes with a financial sacrifice for families.

Excluding some families from income support during these financially vulnerable years has been very problematic for those parents and children and ultimately for the country. The negative impact on the health and wellbeing of these children is there for us to see every day in our hospitals, communities and schools.

All that amazing potential wasted for want of a bit of investment during childhood. Because with more financial support, the research is very clear that parents and kids do better, way, way better: their health improves, their educational achievement, their earning potential, their well-being all improves, and then we all do better. Not rocket science really.

What do the stories and the research tell us (and tell David even?)

The stories and research tells us that regardless of what politicians choose to do and say, most families will do what families have always done for their kids – the very best that they can. It tells us that people in government can however, choose to maximise that parental effort by putting more financial inputs into families. It tells us that when they have done so in the past it did not give parents on low incomes a smooth path, but it made a big difference to their kids.

Politicians from various parties are proposing that we do so again as part of our responsibility to the next generation, and because it works to improve the lives of children and their parents. They are families who will bounce, not hit the ground.

If you would like to read more about the data and evidence I have touched on here, it is all laid out in my book Pennies From Heaven. David and Beth may even like to give it a read, or perhaps a nice chat to a few parents living on low incomes might help?

Dr Jessica Berentson-Shaw is a mother of two, scientist, writer, and author. This is her approach to writing about science for The Spinoff Parents.