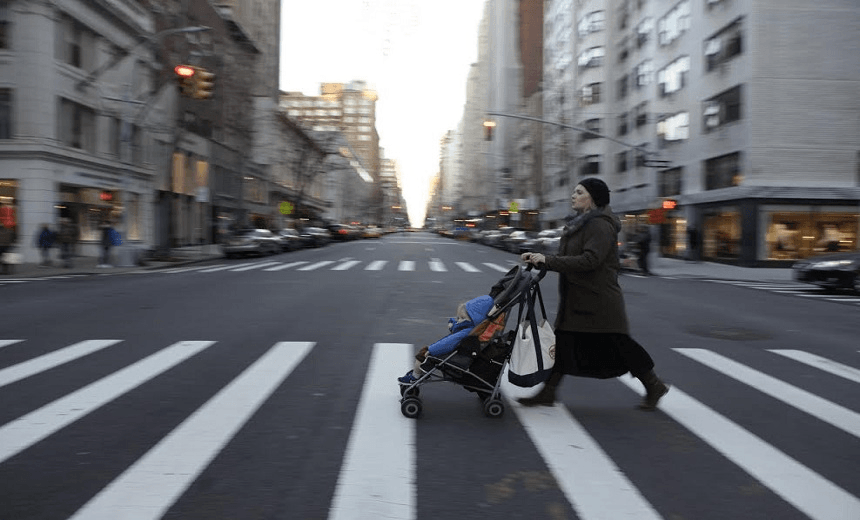 The author and her son by her husband Kieran Nash

From New Zealand to New York City: A mama’s (not so) glamourous life

The author and her son by her husband Kieran Nash

Jacqui Smith is a New Zealand mama making it in the Big Apple. Here she shares a day in the life of raising her child in New York City.

Three lunches packed, four sips of coffee down, ten minutes till I hand over to the sitter, then shimmy into my work clothes, kiss everyone goodbye and start the 31 minute commute to the office.

I slot the last soapy dish into the dish rack and turn around to spend a few more precious minutes with my cherub. For a brief moment, I think I’m killing it as a working mum.

Poo. In his hair on the door handle, in the cracks of the floor tiles. “Poo,” he confirms, then squeals and running off to create a wall pootrait before I can catch him.

I’m an average kiwi mum living an average kiwi mum life. Only thing is I live up three flights of stairs in a one bedroom apartment and fall asleep to a melody of sirens and scent of the neighbour’s weed. I jam into a subway and weave through the skyscrapers to find my way to my warren of an office block on Madison Avenue. My husband leaves the house with a bag of porridge-encrusted laundry slung over his shoulder to drop off on his way to the train, and then fights off the crowds in Times Square to get to his office. He gets free bagels.

“How very glamorous,” everyone in New Zealand says about us living in New York.

They don’t picture stuffing their life plus a kid into a space the size of their kitchen. Swapping their crossfit membership for doing subway stairs with a toddler strapped to their back and replacing their seven-seater car with a pushchair that’s ready to take on snow, ice rain (nastier than hail), and hurricane winds. Add to this picture that they must then wrestle that pushchair, plus that toddler, plus any bags, up and down three flights of stairs rickety old stairs (just to get out the door), minimum twice a day.

To be honest, when we moved across the world with eight suitcases and 4 month-old baby, we couldn’t imagine what it would be like either. We wrote our apartment wish-list, but after a day of viewings, quickly screwed it up and just took what we saw. We didn’t need a dishwasher or a washing machine or a bath! We didn’t need a lift, or a deck, or a yard or hell, a wardrobe! We just needed a roof, some heating and a “safe”, easy walk to the subway (I quickly learned not to browse the rental sites that offered you a crime report from the past seven days).

What we did need, moving across the world with eight suitcases and a four month old baby, was friends. It turns out my son was quite the friend magnet (until he recently started hitting all the little girls). We made friends with people at our local playground, which doubles as a trading floor for drug deals, and where we need to be extra careful about what our kids are picking up off the ground (but that’s okay – there was a shooting at one of the parks down the road last week, and some kids found a gun in a pile of leaves in the other one). We made friends at the singalongs that are held in the local bars during the day (and which, crucially to our friend-making plan, serve beer and wine to the parents at the afternoon sessions), and we make friends with the musicians, Wall St businessmen, homeless people, punks, goths and gangsters who my son waves and blows kisses to on the subway.

We’ve made some amazing friends, but still there’s nothing quite like family to fall back on when you want a night out, a weekend away, or just someone to come over to help with the dishes and not pass judgment on the fact that your house smells like actual poo because you haven’t been to the laundromat for a few days. With the grandparents a grueling 22 hours flight away, and with babysitters coming in at US $20 an hour, we don’t manage many nights out on Broadway (we’re looking at US $400, not including a meal). But there’s a concert on every second subway platform and the clubs come to us via the car stereos outside our bedroom window on Friday and Saturday nights.

Even in more affordable daycare (which has a 12 month wait list in most cases), after the federal, state and special NY city tax, it’s barely worth it for me to work, but I do, part-time. After a year of working from home, which pretty much meant spending the day scrubbing food and excrement off the floor then still working at night, I needed the change of scene. Even if that scene happens to be a subway passenger’s armpit for an hour a day and a spreadsheet for the next eight. I’m working in Manhattan, right?

The commute’s volatile. Trains are always cancelled or delayed or there’s no room. The other day I sprinted down the platform and threw myself into the sardined passengers, with a woman yelling obscenities at me as the doors closed between us. I tried to motion through the window that I was late to pick up my baby, but I should have made a bigger scene if I really wanted to blend in.

As we relay all of this, people in New Zealand ask why on earth we would want to raise a child in New York when we could give him all the space in the world to be a free-range boy back home. And (apart from the prohibitively high property prices and desperate lack of jobs in our industry) it’s very hard to answer.

But our one-and-a-half year-old who loves surf beaches and lakes and running in long grass and cows and sheep and picking fruit straight off the tree also LOVES subways and cranes and planes (one flies over our place almost every minute) and dancing to saxophonists in Central Park. His friends are from all over the world, and their parents are everything from artists and humanitarians to small business owners to Wall Street bankers; from solo parents by choice, to two mum, two dad, and transgender parents. He watches people march for their rights to be who they are and he’s picking up Spanish from his buddies.

While we agree that New Zealand is still the literal land of (real cow’s) milk and (reasonably-priced) honey, and an amazing place to raise a child, we have been sucked into the vortex of New York life that, right now, is going to be so hard to leave.

Jacqui Smith is a Kiwi mum raising an active toddler in a New York, walk-up apartment. She has a blog and you can find her on Twitter.

This content is entirely funded by Flick, New Zealand’s fairest power deal. In the past year, their customers saved $489 on average, which would buy enough nappies for months… and months. Please support us by switching to them right now