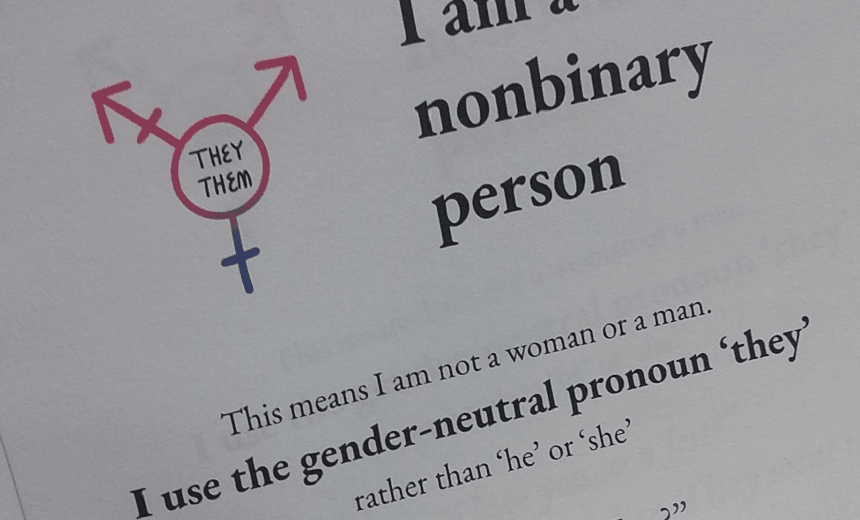 What is it like to be a non-binary parent in New Zealand?

People of diverse genders have been completely left out of this year’s New Zealand census. Here a non-binary parent talks about their experiences of being ignored and erased. Jess Mio describes their life under the relentless gender policing and racism in our public systems and hopes for a better, more inclusive, future.

I was asked a while ago to write something about what it’s like to be a (Pākehā) non-binary parent in our neo-colonial, binary-gender-obsessed society. I couldn’t quite articulate it at the time, but recent events have clarified my thoughts, leading me to sum up the experience in one word: invisible.

As a genderqueer pregnant person, I was invisible to the health system, in which everything was about maternity, pregnant women and mothers.

With a newborn pēpī, I was invisible to the government, who forced me by law to record a ‘sex’ on the birth certificate. This requirement makes all new parents pick out our babies’ genitals for special attention – their other features are considered unimportant. We’re all expected to place a high level of significance on these genitals and ascribe meaning to them according to the European gender binary, expressed through English words: ‘female’ or ‘male’ or (hidden from the online form) ‘indeterminate’.

I was left wondering, why does some faceless official department need to know if my tamaiti has a vulva or penis or genital formation that hasn’t been given an English name? They haven’t even seen these deep dark eyes, or this mass of soft brown hair on their warm head, or these adorable little toes. What right do they have to know what the flesh between their legs looks like?

I felt sick when I ticked one of the little boxes, sorry to be complicit in curtailing my child’s right to privacy and self-determination.

I’m invisible to Statistics New Zealand, who refused to follow their own recommendations on asking about sex/gender at this year’s census. Instead, they continue to force everyone to either describe themselves and their children as female or male, or have one of their staff do it for you. There’s no option of being recorded in the official results as takatāpui, tāhine, whakawahine, tangata ira tāne, māhū, vakasalewalewa, palopa, fa’afafine, fa’afatama, akava’ine, aikāne, fakaleiti, fafifine – despite us all being here on islands of Te Moana-Nui-ā-Kiwa. Not even any further options in te reo Pākehā, such as intersex and non-binary or gender diverse – anything. Even ‘other’ would have been better; at least being othered is an acknowledgement of our existence.

On the phone to Stats NZ, I realised with a sinking feeling that I couldn’t participate in the census without false information being recorded about me, and would therefore have to opt out. We literally don’t count, and we desperately need to be counted – for the provision of vital services and for validating our existence to authorities, institutions and society at large.

I’m invisible when applying for jobs that will enable me to provide a stable home for my whānau, and I’m invisible when getting a mortgage to buy said home. I’m invisible to Plunket, to the library, to airlines, to my Kiwisaver provider, to an endless list of organisations and people. And I’m sick of it.

I want my child to be able to freely affirm their place within or beyond current sex-gender systems as they grow up, so I’m pushing back and demanding to be seen.

I’ve recommended that the government acknowledge that the particular European cultural model of sex/gender that underpins our legislation is neither universal nor benign. Instead it is a hierarchical and inaccurate model of human physiology and sociology, which has only endured due to the (often violent) suppression of those whose bodies or ways of being are deemed to be non-conforming or inferior.

But I realise that requesting incremental changes, such as an easier process for changing the gender marker on a birth certificate, is nowhere near enough. The entire government of New Zealand was founded on hierarchical ideas of people divided along not only sexed but racialised lines: constructs imposed through colonisation. Dismantling the institutionalised dominance of these ideas can only be achieved within the broader aim of full systemic decolonisation.

Then, and only then, will my tamaiti Māori be fully seen and able to stand on their own land free of oppressive colonial constructs. Which is simply what all parents want for their children, I’m sure.

Jess Mio is a Pākehā, non-intersex, middle class, neurotypical, queer, agender and feminist parent. Find them on Twitter at @jessmio89.