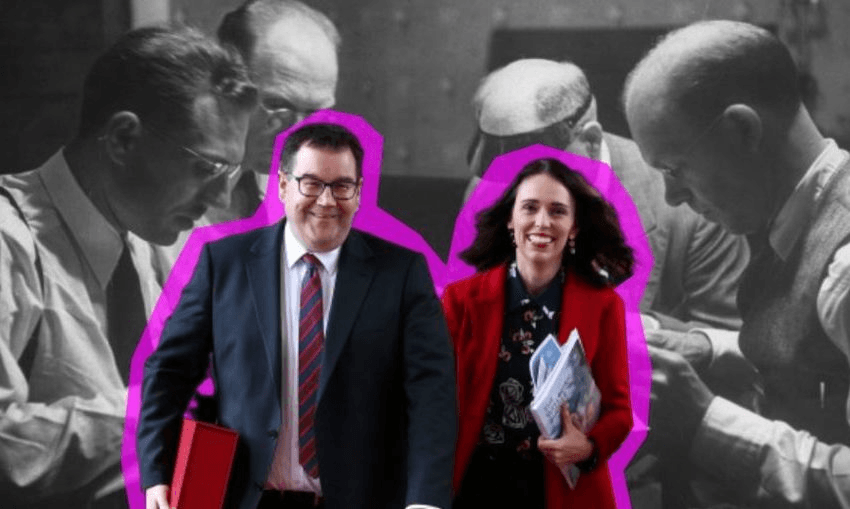 The wellbeing budget is a genuinely big idea, and deserves to transcend a messy week, writes Duncan Greive.

Nineteen-thirty-four was not a good year for the USA. Five years into the Great Depression, and five years from the worst world war. The economy stubbornly static, dangerous fascists rising across the Atlantic, the dust bowl at its height and the New Deal still too new to strike any kind of a deal.

Franklin D Roosevelt, in the first of his epic four terms as president, had a small problem which sat in the way of his big problem. The big one was the paralysis of America’s economy, which was suffocating its citizens in poverty and despair. The small problem was one of measurement: how to know if his hugely ambitious social reforms were actually having the desired effect.

Fortunately, at the same time, a Russian immigrant and part-time professor from the University of Pennsylvania named Simon Kuznets cracked the code. He pioneered a way of adding up all the activity in the vast and complex American economy to create a simple, easily understood number which could be tracked year-to-year. One that would quickly tell anyone who cared to know whether the country was going growing or shrinking, and how fast.

Gross domestic product, or GDP, was a minor revolution, one which caught on around the world, and has become essentially unchallenged as the most important number in any country. At various times others have moments in the sun – unemployment rate, inflation, official cash rate, various market indices. But GDP, or versions based on it, have become easily the most hallowed marker of how a country is faring.

Kuznets realised its transcendent power when he dreamed it up. He also realised its potential for misuse, writing that “the welfare of a nation can scarcely be inferred from a measure of national income”. Yet in the thick end of a century since its arrival, we have as a species only gotten more attached to his creation, and paid less attention to his warning.

The dirty little secret of GDP is that of all the numbers listed above, it’s easily the one you feel the least. Unemployment impacts you or someone you know, it’s a measure of the single thing most people spend the biggest chunk of their waking time doing: working. The official interest rate dictates how fast your debt or savings grow. Inflation how much what you buy costs. Share markets how well your Kiwisaver is doing.

GDP? It impacts all those things, but it can be a slightly jilted dance. Especially lately. New Zealand’s wellbeing budget is an audacious attempt, maybe decades too late, at a corrective. Not to say that the big number doesn’t really matter – but that it’s not all there is.

Let’s start with the bad stuff: the name. The name is hell. A very specific type of contemporary branding apocalypse. Wellbeing as a vibe is hideously of this moment. It feels as emblematic of the excesses of this era as shakti mats, house-made kombucha and GOOP.

It is admittedly hard to wrap up concepts as diverse as intergenerational investment horizons, Shane Jones and multi-agency collaboration under one concept. But surely almost anyone, with a little time, can do better than “wellbeing”.

Neither is it helped by its association with a Treasury which seems to be rapidly unraveling. Once a reliably doctrinaire bastion of just-the-stats-ma’am, the department’s use of baffling jargon, pricey corporate trust exercise card games and a furious and entirely baseless overreaction to National’s exploitation of its insecure database suggests a once proud organisation lost to bureaucratic trendmongering.

And yet if you can penetrate the shameful name and comically inept co-presenter, underneath the wellbeing budget is a concept which has the potential to be another moment when we do something bold and seemingly strange that the rest of the world eventually admires. That encourages a good Kiwi try at crises as complex as mental health and housing. New Zealand on the world stage, willing to do the courageous and unconventional. It calls to mind nuclear free or anti-apartheid protests, removing agricultural subsidies or implementing inflation targeting, buzzy initialisms like ACC and EFTPOS.

Yet for all that, its definition remains somewhat hard to pin down. The wellbeing budget has three components, which can be broadly summarised as:

In some ways, despite the similarly social conscious aspiration, the third is a perfect inversion of Roosevelt’s depression-era desire: rather than one number to tell us whether a government is succeeding, create a basket of things to work on and ask to be judged on them all.

It contains a huge amount for opportunity for this government. If the coalition is able to cement in the minds of the public and media a broader set of measures than just raw growth, it has the potential to transform the practice of politics in this country.

John Key’s National government was able to cruise to three terms even as sustained homelessness became a reality in this country, and wages remained stubbornly static. It rode out everything from earthquakes to mining disasters to Dirty Politics to rampant house price inflation (with a little help from David Cunliffe) with popularity that never budged. This was precisely because GDP outpaced most of the OECD nations to which we normally compare ourselves, and the property-owning half of the country felt – not without reason – that they didn’t know how lucky they were. At least compared to basically everyone else, everywhere else.

The wellbeing budget says two things, simple and radical. That growth in and of itself is meaningless unless it impacts its citizens lives for the better. And that because there are lots of different people, with lots of different kinds of values, it’s a fiendishly complex weighing and measuring exercise to look at everything from loneliness to fresh water quality and give it meaning. But it must be done.

It’s a bold and foolhardy mission. Foolhardy because it creates a whole new stack of numbers upon which the government is asking to be held to account. Foolhardy also because National can whip them with these numbers from opposition and still junk them when they get back into power.

But bold because this intuitively makes some sense to most people. Because we all, when pressed, would struggle to mount a justification for valuing GDP over a vast raft of other metrics. This is why, despite this shambolic week and that dorky branding, the whole country could plausibly get behind the wellbeing budget. Not for the way the money’s spent – sensible people can and should disagree on almost all of that, and the new spending was, mental health aside, very constrained – but because of the quite fundamental question it asks of us as a nation.

Which is: what are we here for?

This culture, this mostly bipartisan era of GDP worship, it has lasted for nearly a century. For the longest time, it was a weird found instrument which served us reasonably well. And it’s far from useless: GDP is very closely coupled to the tax take, which can lift all boats when adroitly deployed. Yet over the past few decades the number has felt increasingly remote, as communities and generations have watched the spoils of its rise land elsewhere.

The beauty of the wellbeing budget (I truly hate even typing the phrase) is that, with a little tweaking, it can keep everyone honest. Annually checking in with suicide rates and carbon emissions and rent increases gives an opportunity for all parties to test their ideology against reality. To ask whether funded policies speak to complex goals truly feels like how grownups should try and do politics.

It’s performance based pay for issues. It’s social investment for everything.

It’s New Zealand’s latest huge, weird experiment, and it’s had an absolute nightmare of a birth. But the wellbeing budget deserves a decent opportunity to succeed or fail. Because despite all that has been stacked up against it, the ideas at its core are essentially inarguable. Principles can be rearranged, values adjusted and ratios are always up for debate. But the idea that we’re here on this freaky, too hot planet for more than just growing one big hairy number?

Surely no one disputes that.