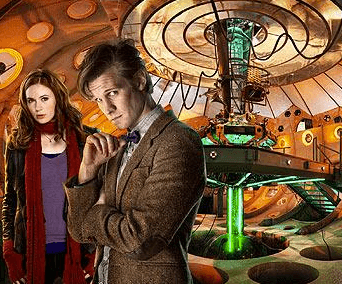 Inside the Lightbox: A Brief Journey Through Time

Of course this was first on the list, you Tardis. Ever since this bad boy first appeared at Number 76 Totters Lane in 1963, Dr Who has been all time travel, all the time. For the unfamiliar, Dr Who is a BBC sci-fi show wherein a Time Lord (The Doctor) flits across time and space, problem solving via kicking alien butt and taking robot names. That Tardis thing I mentioned earlier? A blue police box that actually stands for ‘Time and Relative Dimensions in Space’, and is the Doctor’s trusty (unreliable) spaceship for his journeys.

So where would you like to go in the Dr Who world? More like where WOULDN’T you want to go? The Doctor flings himself back and forth, from the deep past to the terrifying zombie-laden future. He visits Earth when it was inhabited by a civilisation prior to us, creeps around Jerusalem before the Third Crusade and even visits a pre-eruption Pompeii. Not quite a relaxing holiday to the Maldives.

An off-shoot of time travel that is often glossed over is the potential for dinosaur/human interaction. Primeval shows us what might happen if our big prehistoric buddies came to us. In the present day, a hole has ripped through time and ancient, terrifying creatures are taking over planet Earth faster than the iPhone. Who will save us? The Anomaly Research Centre. With world’s end just around the bend, it’s up to this specialist team of zoologists and scientists to stitch up the gaping time-hole and send the monsters back from whence they came. It’s like Godzilla, but…more.

Don’t you hate when you’re driving along the road, and nek min you’re in 1973? That’s exactly what happened to Sam Tyler, a Manchester policeman who, after getting in a car accident, was hurtled mysteriously from 2008 to 1973. The BBC show combines sci-fi elements with police procedural drama, as Sam does his damndest to figure out if he’s dead, crazy, or has actually travelled back in time

I had the pleasure of talking to an Uber driver by the name of Wilkins1 who, after revealing that I wrote about TV, chewed my ear off about this show. “It’s devastating,” he said “he doesn’t know where he is, he doesn’t have his life.”

The sequel to Life on Mars, Ashes to Ashes tells another tale of a time-travelling detective. This time, Alex Drake finds herself shot in 2008 and waking up in 1981. There she meets some of our favourite characters from Life on Mars, and works to solve past crimes and beat her tripped-out subconscious.