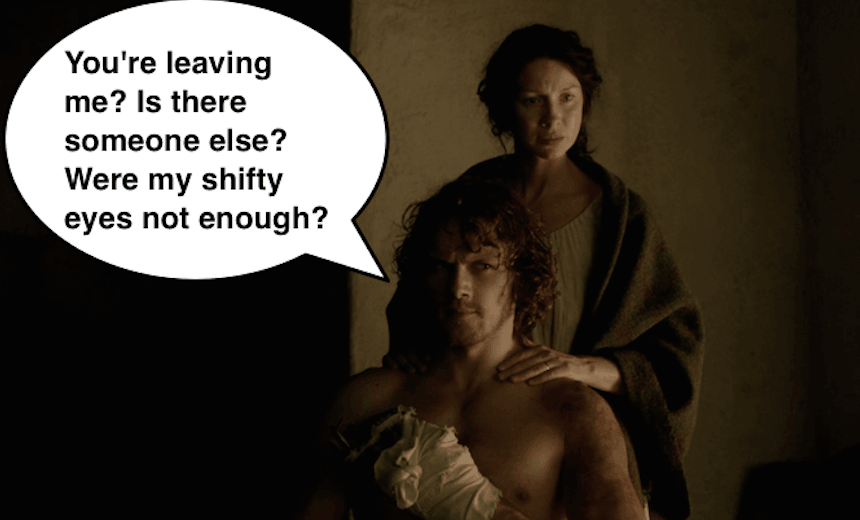 Inside the Lightbox: What to Watch to Get You Through Droughtlander

With Outlander‘s Jamie and Claire setting sail off our screens, Tara Ward cues up some more fantastic shows that will help you cope with the dreaded ‘Droughtlander’.

Outlander has bid us ‘au revoir’ and sailed off into the French sunset, leaving us with a giant Jamie Fraser-sized hole in our Sunday nights. Outlander was a television smorgasbord of culinary delights, a platter of gourmet viewing bursting with adventure, intrigue, romance, and a whole lot of fabulous knitted neckware.

But now that our feast of Highland drama and action has been devoured, what next? What could possible satiate our viewing appetites in the way that the Ginger Ninga and his time-travelling, angry-chinned wife did?

Don’t panic. I’m an ex-Girl Guide who’s watched nearly every season of Survivor, so I have at least four to six survival skills to get us through #droughtlander. Gather around, my little lost sheep, as I put on some dry socks and open my emergency disaster pack. It’s filled with a glorious assortment of nutritious and delicious televisual treats to ensure our survival until the zephyr wind blows Jamie and Claire back into our lives.

Here are some suggestions for you, if you’re missing:

New to Lightbox, Unreal is a satirical look at a romance reality show spookily like The Bachelor. It’s a sharp and clever package that gives a cheeky insight to the behind the scenes manipulations of a reality tv show. Quinn King is Everlasting’s fierce and focused producer, a puppet master gleefully pulling the character’s heartstrings for dramatic effect.  This show ticks both the ‘strong female character’ and ‘misty-eyed romance’ boxes of Outlander, because while Unreal mocks the ‘find true love on television’ reality premise, I know that stuff is real. Am I right, Art and Matilda??

If your Sunday nights now lack a tightly boned bodice and fine linen necktie (and frankly, whose doesn’t?) then step inside the world of Downton Abbey.  Downton takes you back to a time when fashion was fabulous. It’s a lush, sumptuous costume drama fix that never disappoints, as the aristocratic Crawleys and their downtrodden servants maneuver their way through life and love in the early twentieth century.  Granted, there’s no knitted neckware, but what about the time Lady Sybill outed herself as a —gasp — feminist by wearing harem pants?

If you’re missing Outlander’s political whispers and lies, you can’t go wrong with binge watching House of Cards. Kevin Spacey is superb as Frank Underwood, a man so cunning and calculating he makes Black Jack Randall looks look like Lionel Skeggins. The writing is intelligent, the twists breathtaking, and the political manipulation masterful. And for the love of all things tartan, the central characters are called Frank and Claire. If that’s not a sign, I don’t know what is. Let’s just hope this Frank and Claire don’t plan a trip to sunny Inverness anytime soon.

Who knew there were so many shows about time travel? I may have to go back several years to watch them all. My pick of the bunch is Ashes to Ashes, which begins as police psychologist Alex Drake is shot and inexplicably wakes up in 1981, dressed as a prostitute. Some might think that’s a bad work story, but who wouldn’t want to relive that glorious decade of shoulder pads and spiral perms?   Alex finds herself solving crimes in 1980s London, but frankly she’d have saved herself a lot of bother if she’d thought to bring the police files back in time with her.

5) Jamie and Frank: Any Human Heart

It’s okay. We tried. Once you uncurl yourself from the foetal position you’ll remember that Outlander is just sleeping, and will wake again next year. Embrace your addiction, nay, feed it, by checking out Any Human Heart, a British mini-series featuring both Outlander’s leading men.  Any Human Heart tells the intriguing story of writer Logan Mountstuart, an elderly writer, who reflects upon his extraordinary life after rereading his old journals. While our Outlander friends have minor roles, Any Human Heart is a BAFTA award-winning production starring Jim Broadbent and Gillian Anderson, which is reason alone enough to watch.

Friends, trust me: it’s time to move on into television pastures new. Dive into these goodies with renewed energy, and it won’t be long until Outlander is a fond but distant memory. And if that still doesn’t work, thankfully you can watch Claire’s journey on repeat for the next ten months. That time will fly by, right?