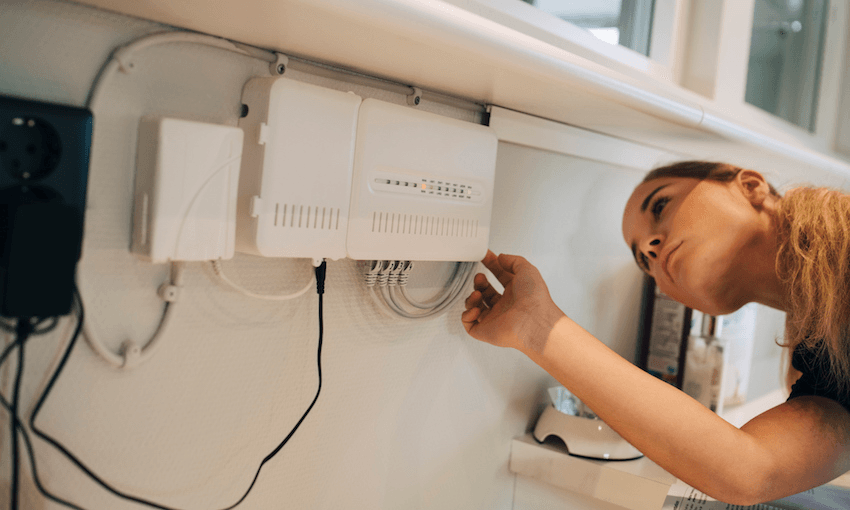 Have you tried turning it off and on? (Photo: Getty Images).

How to improve your internet: some really useful (and really not useful) advice

Have you tried turning it off and on? (Photo: Getty Images).

From broadbeans to home wiring, the Spinoff and the Commerce Commission provide some essential tips on how to enhance your broadband performance.

The internet is buzzy as. Think about it for a second. Inexplicable technology has the answer to every question you’ve ever had, held inside magic flying around in the sky, just waiting for you to ask the right question.

New Zealanders appear to understand the deep existential importance of the immense potential of the internet and the power wielded by its gatekeepers – the internet service providers – and each year we spend about $1.2 billion on home broadband.

In fact, believe it or not, New Zealand’s internet is among the world’s fastest and cheapest.

The Commerce Commission’s annual telco monitoring report shows a “premium” 100Mbps fibre broadband service with unlimited data and a voice line is available for $90 a month. That’s 5% below the OECD average, and 24% cheaper than what you’d get in Australia. According to data distribution company Akamai, New Zealand’s average fixed broadband download speed is 14.7 Mbps, up from 10.5 Mbps. Last month it took me 2 minutes to download Ye, compared to an estimated 12 minutes to download My Beautiful Dark Twisted Fantasy in 2010. New Zealand continued to widen its speed lead over Australia on the Akamai measure, and continues to hold its spot compared to the rest of the world.

But it’s actually really difficult to get an accurate understanding of internet performance. Especially when the speed of plans being purchased and typical consumption is rising, and we all know about the dramatic unexplained variation in performance caused by things like technology, rain and the 7pm rush hour.

So the Commerce Commission is running a nationwide programme to track the performance of Kiwis’ broadband and the way it’s affected by providers, geography, and things like time of day. This will help consumers choose the best package for their household or business, and accurate information will encourage telco providers to compete transparently on performance, not just price.

To get this clearer picture, they need volunteers from across New Zealand to slap a ‘Whitebox’ (similar to a modem) onto their connection at home. This box performs automated tests on your home internet performance at different times of the day and DOES NOT record any personal information or browsing history, or interfere with your internet service.

Volunteers will also have access to their own internet performance information, which may help diagnose issues and improve their broadband performance.

Your country needs you! Enlist today.

But while we wait for the performance data to be available to incentivise ISPs to provide faster, more consistent broadband, The Spinoff and the Commerce Commission have come up with some helpful tips to ensure you’re getting the most out of your broadband. Some are more helpful than others…

This content is brought to you by the Commerce Commission. Sign up to be a broadband volunteer at www.measuringbroadbandnewzealand.com