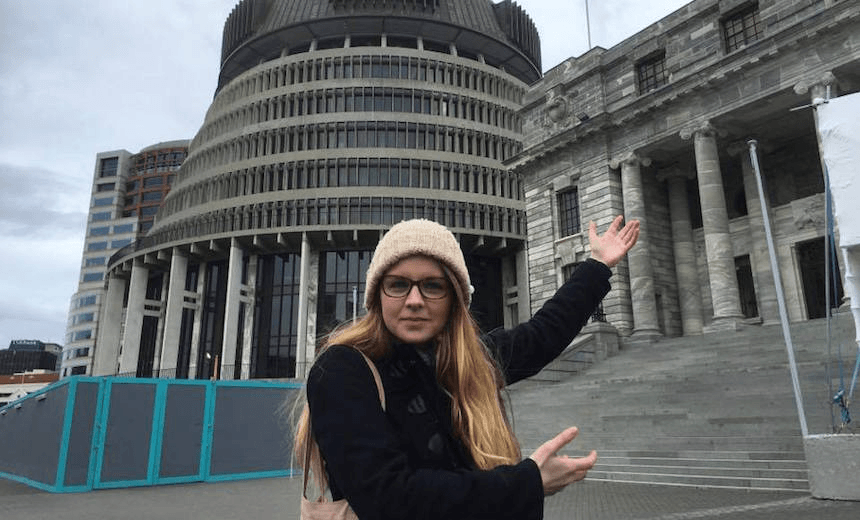 The Spinoff’s week in Wellington!

After spending a week in Wellington, Alex Casey reflects on the highs, lows and celebrity sightings in the windy city.

Last Sunday, I wrote a piece about my weird relationship with Wellington, and what I was hoping to get out of a whole week in the windy city. Although I didn’t find the weird giant baby at Te Papa, I managed pretty much everything I set out to do. I drank some crazy local beer – including an unreleased Choice Bros sour that made my eyes retreat into my skull – and got to talk to some very cool, savvy, smart, charitable, chill, movie-lovin‘ people.

I mean, yes, the wind handed me my own ass on a silver platter every day, and I had to buy two different Chapsticks to stop me from turning into a corn husk doll. Yes, I thought every creak of the hotel floor was going to be The Big One. Yes, Wellington can sometimes feel like it is trolling you – if not metaphorically, then literally.

Weta props aside, I really tried to live, laugh, love every second of every day in the capital (except for when Melodrama came out and I sat in the bath and listened to the whole thing). Here are the key touchstones of my Wellington experience.

You can’t bloody move for art in Wellington, whether it’s Damien Hirst’s rotting squid in Te Papa or a challenging public installation of birds aggressively eating pistachio nuts on the street. On my last day, I managed to fit in the latest exhibitions at the City Gallery, ft. absolute acres of Colin McCahon and a room filled with Martino Gamper’s 100 chairs made in 100 days.

Word to the wise: you can actually walk among the chairs and don’t have to orbit them nervously like a weird untethered astronaut. Just don’t sit on them. Talking of sitting on things, I tried my darndest to feel the warmth of Weta’s heat-up public art couch on multiple occasions.

Perhaps I’m a vampire. Perhaps it wasn’t switched on. Either way, the image of me pensively cupping my own butt cheek to try and gauge the temperature while a local asks “are you okay?” should probably be in the loo of the Louvre.

I’ve finally found the perfect way to get your Twitter mentions blowing up: ask Wellingtonians what the best thing to eat in their city is. A highlight was the shared meat platter at El Matador, recommended by Jessica Manins, intended for four people but polished off between two. Myself and The Spinoff’s Madeleine Chapman were so entranced that we didn’t realise that the “chicken” was actually sweetbreads (guts and that) and the “mushroom” was actually blood pudding (blood and that).

Other honourable mentions include the Mee Goreng at Little Penang, a true and pure ocean of noodles and a surplus of delicious lil crispy bits. Also: Shepherd’s pumpkin dish – a seemingly drab suggestion from Kerry of Choice Bros and approximately everyone else on the planet – made me drool out of my mouth, ears and eyes. Also: it was the last night they were serving it on the menu, talk about Serendipity (2001).

Washed everything down with a Leed Street Bakery salted caramel cookie because, if Lord of the Rings taught me anything, it’s that there’s plenty of room for elevenses.

According to my thorough research, nobody in Wellington leaves their phones on the tables at bars or restaurants, or takes them out at all really. As an Aucklander who frequently misses my bus stop due to Plants vs Zombies 2, this was a jarring change. At lunch and dinner, you actually have to talk to each other and… look?… at each other? Doubt it will catch on.

On Monday I got invited to a seal colony by someone from The Black Seeds. I thought this was the most ‘Wellington’ human interaction I would have until Tuesday, when someone invited me to a pub quiz with the Mayor. On Wednesday, I saw Steven Adams bellowing at someone across the Cuba Street. And don’t even get me STARTED on the politics celebs at the airport (David Seymour and Andrew Little). What a town.

Determined to relive a weird childhood of seat-hopping in the chamber, I went undercover on a Parliament Tour. Keep yonder eyes open: it was actually very, very good and I learned an extreme amount. For example, all the NZ First codgers still have their little $2 shop New Zealand flags on their seats from the flag debate. Also, seems like anyone can hire out the magnificent function room free of charge inside Parliament, you just need an MP to get you to the greek.

Just across the road is He Tohu at the National Library, where I found myself alone with three of New Zealand’s most important documents – He Whakaputanga, Te Tiriti o Waitangi, and the Women’s Suffrage Petition – silently welling up. Word to the wise: when the time-sensitive lights go off, do not panic and stand completely still like a statue until a staff member comes in and asks if you are okay through the darkness. Each exhibit has its own little button on it, do not embarrass yourself like I did.

Aside from the pistachio pigeons, I raked in a lot of IRL cool animal spotting which is like Wellington’s version of Pokémon Go. I went to Zealandia for a night tour and saw some very plump takahē, some cute pāteke ducklings, and a whopper FOUR kiwi scampering around – one particular patriot emerging from behind the toilet sheepishly.

Another piping hot serving of Wellington nature came in the form of a 4WD safari out to Red Rocks, featuring a lovely guide called Kent Clark (actual name, actual superhero). On the way we saw many seals, many deer, many ducks, many photo opportunities that haters will claim to be ‘fake’ – just like Superman.

On growing up in and around Wellington