In a few months’ time, Auckland Zoo’s two elephants will be travelling across the Tasman to their new homes. The decision to relocate the pair was a difficult one, but promises to give the elephants a happier and healthier long-term future.


With their dexterous trunks and powerful feet, Burma and Anjalee pull apart and devour their banana palms with ease, peeling back the layers of the stem bit by bit. Soon, they’re onto some native puka, giving the branches a good shake to get rid of any dirt but carefully so to keep the leaves intact. At one point, the younger and smaller Anjalee tries several times to grab some of Burma’s food after finishing her share who, quite generously, cedes to her teenage companion.

“They both love food, and sometimes Burma is generous and sometimes she puts Anjalee in her place,” says Andrew Coers, team leader of elephants at Auckland Zoo. “Anjalee, being 14 years old, is like a young Burma. She’s all about play and being active. You wouldn’t think she could run around the paddock like a maniac, but when we had a big downpour recently, she was running around, jumping into the pool, and rolling around in the mud.

“Burma, on the other hand, is 38 and mature, and there’s always an aspect of trying to keep up with Anjalee. She’s not one to put herself in the pool often, but sometimes Anjalee will be playing in there and she’ll persuade her by calling to her, so Burma feels obligated to play with her in the pool. She’s just such a sweet and lovely elephant.” Coers, who’s worked at Auckland Zoo for more than 20 years, clearly has an immense love of and devotion for the elephants. But the next few months are set to be a difficult time for him and his team as they prepare to bid farewell to Burma and Anjalee. Burma will move to Australia Zoo in Queensland where she’ll join a matriarchal family herd of varying ages and, as the oldest elephant, will be able to play an aunty role for the younger females. Meanwhile, Anjalee will be moving to Taronga Western Plains Zoo in Dubbo, New South Wales, home to both female and male (bull) elephants. As well as being part of a family herd at her new home, she’ll also have the opportunity to breed naturally with a bull and, hopefully, become a mother herself.

The zoo’s decision to relocate Burma and Anjalee was a choice made in the best interests of the animals, says Auckland Zoo director Kevin Buley. He says it was a tough decision for the zoo to make but a number of factors had led to the decision that it was time to find new homes for Burma and Anjalee.

In 2011, Auckland Zoo made a long-term commitment to elephants with the intention of building a multigenerational family herd with Burma at the heart in a matriarchal role. Burma, who at the time was the sole elephant left at Auckland Zoo after the death of much-loved female elephant Kashin in 2009, was to be joined by two new elephants from Pinnawala Elephant Orphanage in Sri Lanka, one of whom was Anjalee. Burma, 38, will move to Australia Zoo in Queensland (Photo: Supplied)

But the process proved to be much more arduous than expected, with Anjalee’s arrival delayed until 2015 and the second elephant’s arrival suspended indefinitely after being inadvertently caught up in court action in Sri Lanka. Despite the setback, Auckland Zoo proceeded in its attempts to get Anjalee pregnant via artificial insemination. But after five failed attempts combined with a lack of viable fresh semen, the decision was made to halt the artificial insemination programme in 2019 and begin looking at alternatives for Anjalee to breed.

The desire for Anjalee to breed, Coers explains, is based upon ensuring her long-term health. When Anjalee was initially assessed by a team of elephant reproductive specialists from Germany, they could already see changes in her reproductive tract that would develop into significant pathology (cysts and tumours) if no action was taken.

“Although they’re very small because she’s a young elephant, over time we know the more reproductive cycles she has, the more reproductive hormones feed that pathology, so they get bigger and more invasive,” he says. “Giving birth to a calf can reduce the pathology present and helps reset that biological clock. We often hear about how it’s harder for people to get pregnant in their late 30s and 40s. There are more risks associated with it, and it’s the same with elephants.

“We considered trying to get Burma pregnant in her late 20s and 30s but the risk of having complications goes up to 80-90%. So, as they get older more issues can occur.” The decision to send Burma and Anjalee to separate zoos also came down to their differing needs as post-reproductive and reproductive animals. And while the pair have been good friends for the last five years, coming together whenever a helicopter flies by or nearby fireworks go off, the connection has never been maternal by nature.

“They’re amicable but they’re not bonded like a mother and her calf, or a multigenerational herd,” says Buley. “So, the decision to send them to separate new homes was with the understanding that the long-term benefits of their individual needs being catered for vastly outweighed the temporary strain of them being separated.”

For Coers and his team, for New Zealand to no longer have elephants is an incredibly upsetting outcome, especially after “everyone’s contribution over so many years to get our elephant programme, that we’re incredibly proud of, to where it is today.

“Where they’re both going is great and these homes will provide them with everything they need to be happy and healthy elephants. The gutting thing for us as a team is that we wanted to achieve that here at Auckland Zoo for generations of New Zealanders to experience. With the decision being made, as a team we’re now fully focused on making this move as easy as possible for Anjalee and Burma,” says Coers. 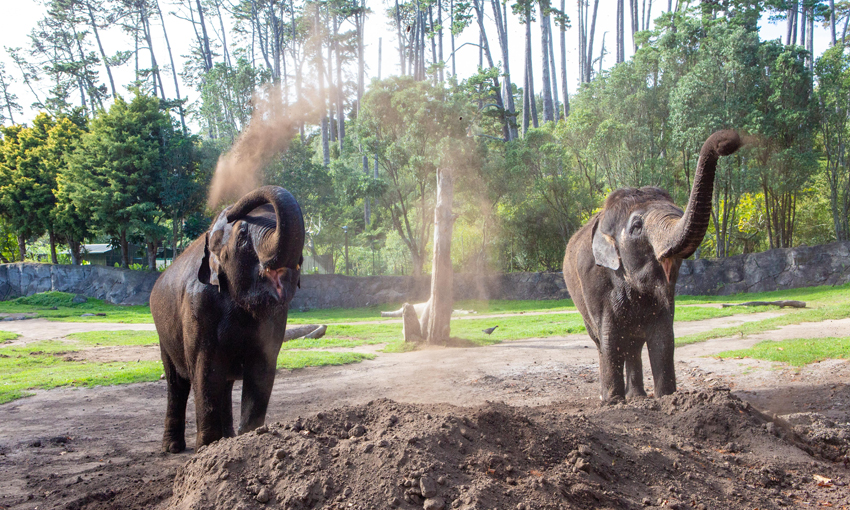 Playing up for the crowd (Photo: Supplied)

On a practical level, a key part of ensuring a smooth transition will be getting Anjalee and Burma used to their travel crates that will house them on their planes and on the road in Australia.

“We place the crates in the paddock and spend months conditioning them,” says Coers. “We’re trying to make them as comfortable as they can be, so we’ll do things like hang out with them and feed them inside their crates. Ultimately, by the time they leave, they should be nice and settled with the doors closed. Then when anything out of the ordinary starts happening, like being lifted up and put on the transport truck, they’ll know they’re safe and comfortable in there.”

When Burma and Anjalee move, the six members of Auckland Zoo’s elephant team, including Coers, will also be joining them for an extended period of time, which will be key to helping them adjust to their new environments.

“Anjalee, before we met her, was already separated from her mum at the orphanage. There were probably 70 odd elephants living with her there so she’s familiar with elephants coming and going. In some ways, that’s helped us because she’s such an independent and ‘street smart’ elephant, so she’s likely to be better equipped for the move,” he says. Having a swim (Photo: Supplied)

With Burma, who’s spent the last 30 years of her life at Auckland Zoo, the team will have to manage things more carefully. Her successful integration to her new home will rely on her making friends with the herd of younger elephants, with Coers and his team on hand to assist with the initial introductions.

“Knowing that it’s going to be a huge adjustment for Burma initially, we’ve got to help make things as easy as we can for her. We’re going to be there for an extended period to support her through this critical period when she really needs us to help ensure a positive outcome for their elephants and Burma. Although she’s going to a very similar elephant programme to ours, we’ll be the familiar faces, helping give her the continuity of care she’s used as she meets and begins establishing relationships with her new herd and their elephant keepers,” he says.

“When you’ve got a group of elephants who already have relationships, it’s easy to leave a new one on the periphery. Our job is to bring those relationships together and help them see the benefits of hanging out with one another, and both our elephant teams are confident we can do this.” The move marks the end of a century of association with elephants in NZ (Photo: Supplied)

Since the decision to move the elephants was announced late last year, Buley says the news has been met with disappointment and sadness from both those working at the zoo and the wider community. But he says there’s also a recognition the decision is about putting the needs of Burma and Anjalee ahead of anything else.

“It’s the end of an era, a century of association with the species. It’s going to be a sad day when they go, and it’ll be the end of having any elephants in this country. However, the community understands that it’s a tough decision but the right decision.”