At the Chorus Fibre Lab, José Barbosa peeked behind the curtain of the internet and found something beautiful and very, very fast.

The human mind is a daily swarm of notions, speculations, ruminations, thoughts and otherwise base-level brain puffs. Just to get through the grind of survival, we’ve evolved to mentally plop into plain view our most immediately relevant thoughts and sweep everything else under the mat. The alternative is to be swallowed whole by a tsunami of internal monologues, pin codes, personal reflections, holiday memories, birthday dates, new year’s resolutions and the lyrics to ‘Bohemian Rhapsody’.

I feel lucky that there’s only one nagging sub-species of thought I must avoid at all costs: if I come in contact with even the most banal of modern technology, such as a smartphone, I’m in danger of immediately visualising the gulf of time between the world without long range digital communication and the world as it exists today where a person can send something called a PDF from their home computer to another person’s computer in less than a second.

It figuratively blows my mind that we started off as rough-as-guts monkeys smashing rocks together and now we wear polo shirts and own things called Roombas. If I think about it too hard my brain shuts down and I have to spend a whole afternoon staring out the window and drinking buckets of tea. This is why I was on several different types of sedatives when I rang the bell at the front door of the Chorus Fibre Lab. Almost immediately the huge doors opened and Kurt Rodgers thrust his head through the gap like the Emerald City guard in the Wizard of Oz. Rodgers is the director of the Chorus Fibre Lab and he is, truthfully, quite a bit like a wizard with a friendly white beard (impeccably trimmed rather than long and unkempt, though) and with a whole mess of wonders to show off.

I was here to witness the fastest internet service these shores have potentially ever seen. Chorus calls the service Hyperfibre, and it’s up to 40 times faster than the average broadband speed here in New Zealand. It sounded like the difference between trying to suck a Christmas ham through a straw versus throwing it down a hydroslide. I love water parks and I love fast internet, so my body was ready for whatever Kurt wanted to expose it to, but first there was a quick tour of the Lab itself.

There were no bunsen burners inside but there was perhaps the best example of a fake domestic lounge I’ve ever seen. This, explained Kurt, is where they take employees from the various ISPs and hold training sessions on how the internet is set up in a home. There was a lovely set of bookshelves complete with a fake plant, some lounge chairs and a chic entertainment unit propping up a flat screen TV. I briefly wondered if Chorus should consider training real estate agents in the art of styling. 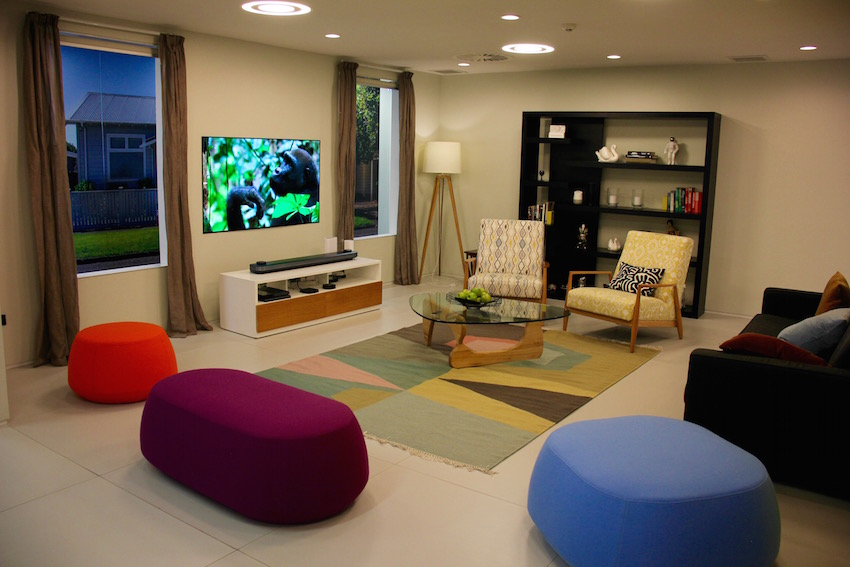 But then Kurt showed me a mock modem and router setup behind the TV, designed to mimic what you’d find in a typical New Zealand home. This was the first wonder I was to experience because it was the cleanest and tidiest collection of home broadband paraphernalia I’d ever seen. All the little boxes were neatly screwed to the wall and the wiring was organised as if it had been designed by a sentient supercomputer. A quick image of my setup at home flashed through my brain like visions of hell flashing through Laurence Fishburne’s mind in Event Horizon, all flailing cables and a thick skin of dust covering everything like a spore dump. I shivered and suggested we move on.

The lab also has a simple mock-up of a typical New Zealand berm showing the lovely tubes beneath the street that brings us the internet. It’s here I began to get some idea of the elegant engineering behind fibre optics. At its most basic level, the system pushes pulses of light through incredibly thin threads of glass to carry information from computer to computer, user to user.

Here I had to take another sedative because, honestly, this was getting into Lord of the Rings territory. Gandalf had his magic round seeing stones; Kurt has his pulsing light lasers. But the particular genius of the Hyperfibre service is that all you have to do is swap out the existing lasers for new, faster lasers. You don’t have to dig up the fibre optics or put in new infrastructure. It’s basically as easy as me installing a powerful new showerhead in my shower (or José’s Sanitation Grotto, as I like to call it). 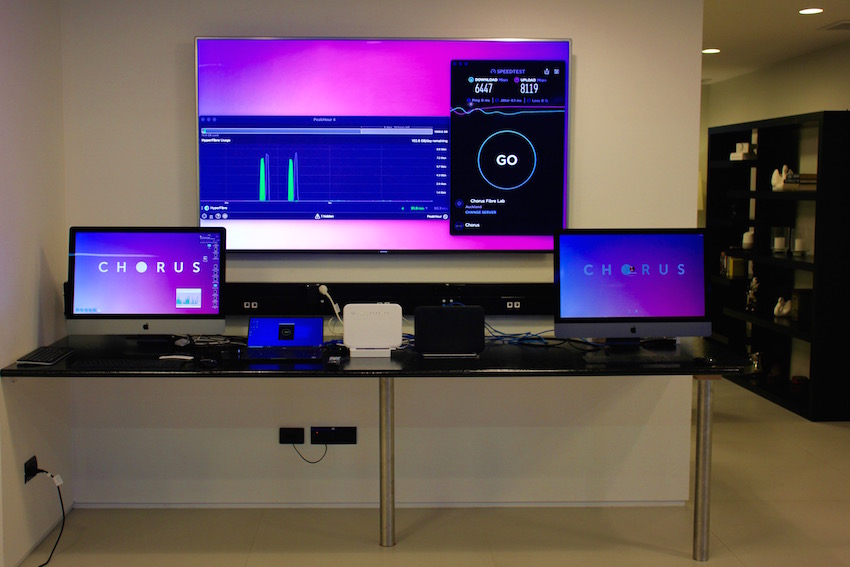 By this point I was ready for a demo to distract my mind from the tech worm hole it was plummeting down, and Kurt was only too happy to oblige. I was plonked in front of an extremely minimal desk holding two computers and a huge flatscreen TV upon which was projected a whole bunch of swiftly moving data in numerical and graph format. One of Kurt’s colleagues pulled up a speed test program and tested it on a vanilla gigabyte connection pulling down a 10 GB file. The familiar dial interface sprang into action and showed it was getting some really good speeds: around 930Mbps down. The file came through in roughly 2 and a half minutes. I think I even said “that’s not too shabby” out loud.

“OK”, said Kurt, “let’s try that using a Hyperfibre connection.” The needles sprang into life again but this time the resulting speeds were extraordinary, pulling down data at around 4200Mbps and uploading at the same speed. At this point my carefully constructed veneer of detached professionalism slid off me like an oily clump of chicken livers. I leaned forward and said, again out loud, “oooh yes please” like I was Oliver Twist being offered a goody goody gumdrop ice cream.

At that point Kurt fired up a session of Counter-Strike: Global Offensive on the computer and, again, ran it first on a normal gigabyte broadband connection and then on a Hyperfibre connection. Perceived gameplay speed didn’t vary much at all, but what was interesting was packet loss.

Packet loss is where the connection drops one or more ‘packets’ of data in transmission. It’s a gauge of how stable your connection is and if you’re gaming online, particularly in a fast multiplayer environment, the less packet loss you have the less likely you are to experience freezes or lag in gameplay. At home I pretty much have to be chained to the ground like a werewolf when Netflix freezes, so I can imagine how much more frustrating lag in gaming can be, particularly in competitive gaming. Behind the curtain of the internet (Photo: Simon Day)

Under the normal broadband connection the game was getting between 5 and 12% packet loss and fluctuating pretty widely in that band. On the Hyperfibre connection it was holding on 0% for the whole session. Obviously other real world situations – wireless connections etc – might affect that, but it was remarkable nonetheless.

The last test of the day was the simplest, but ultimately the most impressive. Kurt had Counter-Strike going, but was also downloading a large file and had a film play on Netflix on a smart TV all on the same connection. On the broadband connection speeds varied wildly as each device battled the other for dominance of the ham-sucking straw. But on Hyperfibre the straw widened out and became a wind tunnel, the computers and TV each throwing tubs of metaphorical ham into the wind. The speeds barely wavered, Netflix didn’t lag, neither did the download or Counter-Strike.

I stopped living with other people long ago (it was thrown out of court, but I was over having flatties by then anyway) but I can imagine what it must be like if you’re in a house full of internet hungry people all downloading and uploading God knows what at the same time of day. At the very least Hyperfibre could make a huge difference to household harmony and unity.

Hours later I stepped out onto the street after saying goodbye to Kurt. I’d been granted a fleeting glimpse into a world of internet abundance. A land where there were no ‘still loading’ icons; no buffering and no downloads stuck at 99%. On the bus I stared out the window and thought about all those lasers pulsing on and off faster than we could see, working away under our feet so we can stream pretty much anything we want, when we want it. It already seems like magic, so it can’t be too far off being actual magic. On that day we are going to have a lot of ham to choose from. I hope we’re ready.