With a network that covers Aotearoa in its entirety, it’s no wonder that NZ Post relies on more than 6,000 New Zealanders to keep their delivery machine moving. We met a few of its employees where they work, and discovered there’s more than one way to be a Post person.


It’s the nature of a delivery business that the NZ Post “workplace” extends out to the streets – and all the way to the doorsteps of more than two million households. Chief operating officer Brendon Main says this “network of people” is fundamental to what the company is and does – and it’s a diverse one.

When Carlene Enosa ventured back into the workforce in 2017, she was just looking for something part-time to ease her back into employment. But her manager at NZ Post’s New Lynn depot could see the new mail sorter had something about her, and Enosa was soon offered a permanent position as a service delivery agent – a postie, as they’re more commonly known.

Four years on, the 35 year-old mother of five is now an acting service delivery coordinator (SDC) at the nearby Henderson depot and looking forward to her first management course.

“This is what I love about working for this company – all the opportunities that I’ve been given in the short amount of time I’ve been here,” she says. “I’m loving it.”

By the time Enosa arrived at Henderson, she had already stood out as someone with the skills and personality to train other new employees. Fittingly, that role is now a regular part of her working week.

“If I’m not a postie I am a trainer. Any brand new people that apply to work here, I’m always nominated to train that person. I’m also currently learning the management side. I’m just basically setting up a future for myself within this company. Any opportunity I’m given, I will go for it.”

Those opportunities have included the chance to step up to the acting SDC role.

“I’m helping the manager who takes care of the admin side of things, planning out the days, dealing with senior managers. I help the team, distribute the workload – it can be quite hard sometimes, but the more I do it, the more I get into it.”

But part of her week is still spent out there on delivery to local households.

“After I finish sorting my mail I’m loading up and I’m off by 9am at the latest. It is nice, we’re outside – you don’t have anyone breathing down your neck. I’m always making sure that I’m getting my job done and also checking up on others as well.”

It hasn’t always been easy though – getting to work as a mother of five takes some organisation.

“I’m up at six o’clock. Breakfast, get ready, before-school care for my two youngest, and then I’m here just before 7am to start my day. We start off with team briefs, every single morning, just to know what’s happening in our day. It was especially important during lockdown, just to have everyone on the same page and make sure they felt safe being at work.” With postal delivery designated as an essential service, Enosa and her team worked through last year’s level 4 Covid-19 lockdown – a responsibility that she admits was “tough” at times.

“I was very cautious, especially with having my children at home. My kids were quite sad. My partner got to stay home with them and he worried a lot for me as well. But every time I got home my partner would have everything at the door for me so I could run straight to the shower.

“I tried to look at it as a positive, because a lot of other people around the country, around the world, weren’t fortunate enough to hold onto their jobs. I just felt very blessed to still be able to work.”

The near-absence of traffic on the roads during lockdown did make getting around easier, but the real upside, she says, was “the feedback from the public, acknowledging us and saying ‘thank you for the work you do’. I honestly did not look at myself that way, but the public were amazing. That was definitely a highlight of the job so far.”

Enosa is now registered for one of NZ Post’s Set for Success seminars, which are designed for staff who are interested in pursuing a management path.

“I’m looking forward to the seminar and just learning as much as I can. I also have great support from my manager. Anything that I want to know, she’s told me to ask her.”

That’s not all she has going on. She recently completed the company’s internal first aid training and is now looking at joining NZ Post’s health and safety team. It’s a remarkable story for a young woman who, as a teen mum, wasn’t expected to achieve. Enosa says she “basically had to teach myself how to grow up. I felt like I had a lot of growing up at a young age, but having to mature very fast was a blessing. I wouldn’t be where I am today if it wasn’t for my children.”

Now, her eldest daughter is supporting her own university study by working part-time at the same depot. So, I ask, have the management skills learned being a mum of five informed her new working life? She laughs.

“You could say that!”

Moeroa Paratainga already had a career behind him when he started at NZ Post in 2018. The 62-year-old, born in the Cook Islands and raised in Auckland, had worked as a chef in New Zealand and abroad. But when his wife passed away, he realised he needed a change in his life – and a job he could commit to without the stress of running a kitchen.

His role as a sorter at the Auckland West depot in Avondale means that every morning he unloads incoming parcels and allocates them across a line of individual cages for the day shift courier drivers to collect, load and distribute. It relies on a lifetime’s knowledge of Auckland geography – and a new degree of physical fitness on Paratainga’s part. 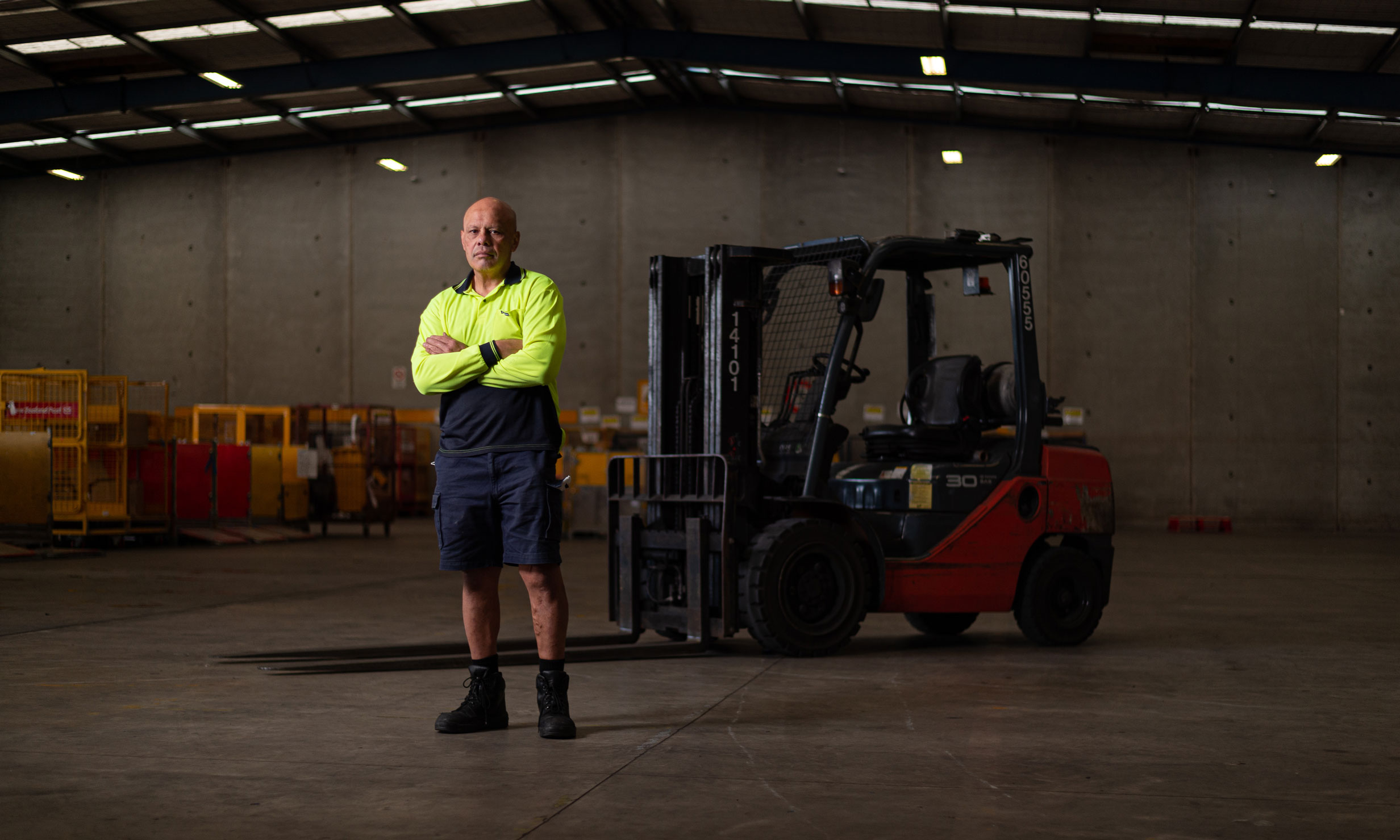 “After being a chef for such a long time I’d put a bit of weight on, so I was looking for something physical,” he says. “And I’ve lost a lot of weight and I’ve actually become quite fit. I’ve also learned a lot – which I didn’t expect to. I’ve learned about the industry itself and how it functions, how reliant people are on freight, and how hard some people work. It really showed when Covid was on. That’s when I realised how important this particular job is, how much of our economy relies on the freight industry itself. You are part of a network, and every industry is relying on you.”

The rapid increase in demand for courier services last year has been well documented, but what’s perhaps less understood is how that change impacted the people responsible for implementing it – people like Moe. While the process understandably introduced considerable challenges, he says that it was made far smoother by the collaborative approach taken across the business.

“There was some upskilling as part of it, but senior staff developed a system that would work for us. Everyone’s input went into that. But there was also the softer side [of the increase in demand], where you’d get a package from overseas and you could see it was a granddaughter sending it to her grandma and you thought, well that was really nice. You could see a lot of effort had gone into it. You realised what we were doing was really important. I like that part of the job.”

The other thing Paratainga saw was people from his old trade, hospitality, looking for work after their own jobs dried up in line with Covid alert levels. Last year was a turbulent time with dramatic shifts up and down in demand, but NZ Post came through the year with no staff cuts.

“I’m lucky to still have a job. There’s a lot of people in hospitality who don’t.”

It’s a job that suits the stage he’s at in life. He lives nearby and he likes the people he works with every day.

“The people here are really good. The ethnic backgrounds here are huge – Polynesian, Asian – so you get to meet other cultures as well and get an insight from that. You realise how hard some people have had to work to get where they are. I’ve worked in some pretty nice places as a chef, but I’m comfortable here. I’m happy where I am.”

Sanjay Patel can name the exact day he began providing services for CourierPost at the Auckland West depot: May 22, 2004. He’s a contractor for NZ Post and as a courier driver he owns his own business – including his own van – and handles his own GST and taxes, but he’s quite clear that when he has the uniform on, “I am proud to be considered a NZ Post person.”

Sanjay, now 44, began as a residential courier, but after three years was able to get on one of the depot’s “industry radius” runs, meaning his day consists of pickups from local manufacturers and distribution centres. He’ll bring parcels from regular customers into the depot for sorting and delivery to their ultimate destinations.

“You have to be good with customers,” he says. “I’m dealing with the same customers every day, multiple times a day. So it’s like family and friends.”

Do they give him Christmas cards?

“Yes they do,” he grins. “And Christmas gifts.” Sanjay’s popularity with his regulars has a business benefit too. “Sanjay keeps our customers,” the depot’s service delivery manager Linda Larsen readily points out. Some of those customers he’s been working with for 14 years.

“They’ve never tried to go to other companies,” says Sanjay. “because they get good service and loyalty.”

In an area that’s dense with delivery competitors, that means a lot. But the contracting model also means that it’s worth Sanjay’s while to spot and develop new customers.

And if Sanjay does lose a customer, he doesn’t forget about them. He stays in touch.

“At the moment I’m working on one big customer, who used to be with us and went to a competitor. But they don’t like the service they’re getting. They’ve realised, oh, Sanjay’s service was good – it might be time to come back.”

Happily for the company, Sanjay, who has a wife and two kids, has no plans to go anywhere: “I love what I’m doing,” he says.

But nearly two decades of negotiating Auckland traffic for eight or nine hours a day? Is there a secret to coping with that?

“Always turn on the radio and listen to music,” he smiles. “It’s a habit after 17 years.”

This content was created in paid partnership with NZ Post. To learn more about the present and future of delivery in Aotearoa, read The Full Download here.