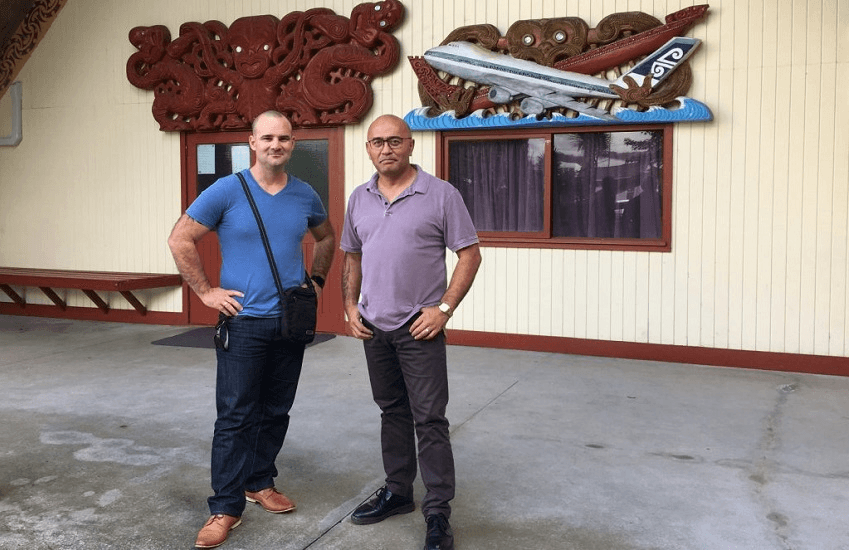 All Heart’s Joe Youssef with Tony Kake at Papakura Marae, the recipient of an unwanted hotel stage. (Photo: All Heart).

All Heart’s Joe Youssef with Tony Kake at Papakura Marae, the recipient of an unwanted hotel stage. (Photo: All Heart).

All Heart NZ proves the proverb that one man’s waste is another’s treasure. Nominated for an NZI Sustainable Business Network Award, it’s one of the social enterprises listed on a new platform encouraging corporates to help the world while making money.

A hundred metres of unwanted car yard fencing that was destined for the scrap heap is now penning in excitable dogs at an animal rescue organisation. Furniture from a closing regional newspaper office in Cambridge is decking out a new overnight women’s refuge in Tauranga. Redundant computers from a leading New Zealand retailer are helping a charity relocate refugees and educate children in the Pakistani slums. And a 29m mobile stage from a five-star hotel has gone to Papakura Marae, saving it $2400 a year on renting stage equipment.

These are some of the thousand-and-one ways social enterprise All Heart NZ finds to reuse and recycle corporate waste.

Established just two years ago, All Heart is meeting a huge demand from businesses for positive and cost-effective waste solutions. These companies want to be sustainable so are loathe to throw disused fittings and fixtures out, but they don’t know what to do with them, founder Joe Youssef says.

“I’ve got companies spending ridiculous amounts of money on storage for stuff that’s never going to be of use to them,” he says.

All Heart NZ acts as a consultancy, and can devise waste plans for companies. But the key to its aims is its network of relationships with other social enterprises.

“Zero waste solutions for big corporates is actually a byproduct of what we’re doing,” Joe says. “Our core value is people-focused, because we know this stuff can affect the lives of those most in need.”

All Heart is the kind of organisation The Ākina Foundation is registering on its new social procurement platform. Launched in conjunction with New Zealand Post, Fwd: is an online marketplace connecting buyers with certified social enterprises. It’s a new concept for this country, and offers businesses the opportunity to take social and environmental impacts into account by purchasing what they need from organisations that are doing good. It’s tapping into the growing self-awareness, and the public’s demand for transparency, of the footprint businesses are leaving on the world, and providing solutions for companies who can’t do these things themselves.

“All went well, there was a hundred percent diversion on the New Zealand Post stuff that would have gone into landfill in my opinion,” Youssef says.

“It didn’t need to – we can find a sustainable way of redirecting that stuff for no greater cost than sending it to the dump,” he says.

Ākina and New Zealand Post have been nominated for the Partnering for Good award at this year’s NZI Sustainable Business Network Awards on November 22. And All Heart NZ is separately nominated for the same award.

Now in its 16th year, the 2018 NZI Sustainable Business Network Awards saw a record number of entries – 263. This volume represents the growing importance and understanding of sustainability to New Zealand’s business community. The vast variety of businesses nominated for awards shows the way this approach to doing business has become a key part of companies working in everything from the food sector to some of the country’s largest companies like Air New Zealand. It’s no longer enough to just think about printing less paper, it’s about revolutionising the social and environmental ethos of how Kiwi businesses operate.

And it’s also about who you choose to work with. Ākina chief executive Louise Aitken says companies have the power to deliver change simply by choosing to do business with impact-led enterprises.

“Over $560 billion was spent by businesses in Aotearoa last year,” she says. “If even a small portion of that can be directed to suppliers who work to improve people’s lives or care for our planet, the collective impact is enormous.”

But it can still difficult be in New Zealand to find the the people and expertise required to fill the sustainability goals for businesses. Matt Parsons, New Zealand Post’s head of procurement, says one of the early challenges in moving to social procurement is finding enough suppliers.

“But it’s chicken and egg isn’t it – if we go out and say ‘we’re willing to buy from you’ more social enterprises are going to spring up and respond to this.”

The New Zealand Post procurement team has looked at Australia, where the social procurement movement is growing a lot faster.

Another challenge is that the organisation already has suppliers for everything it needs. “So then it’s like, ‘how do we engage with new suppliers?’”

They decided to target small pieces of their contracts, and do that in a collaborative way with existing suppliers to get them on board.

“So we would carve off a very small portion of a current contract, which would mean a lot to a social enterprise and very little to an incumbent, and then bring that incumbent on the journey with us.”

One example was New Zealand Post’s uniforms. It met with its current supplier, Profile, and explained its aims. Then it contacted ethical and sustainable uniform maker Little Yellow Bird, and held a collaborative session with everyone about how to move forward.

“It is about that social conscience part as well, and when you rattle that, then people come on board very quickly,” Parsons says.

This content was created in paid partnership with NZI. Learn more about our partnerships here.

This content is made possible by NZI. The NZI Sustainable Business Network Awards are the pre-eminent and longest-standing sustainability awards in New Zealand. The awards recognise and celebrate companies and organisations that continue to revolutionise the business landscape.