Child poverty isn’t a problem with one set solution – it truly does take a village to help break the cycle. With help from their donors, Share My Super is putting money into charities addressing child poverty from all angles.

New Zealand has one of the highest numbers of registered charities per capita in the world, and global studies have shown that New Zealanders are some of the most generous donors.

Liz Greive* is one person who saw an opportunity to make a difference. A former social worker, Greive founded the charity Share My Super after reaching retirement age and realising that while for many people the pension was essential for their quality of life, she was in the lucky position of not needing the extra cash.

Greive felt there was a missing opportunity for herself and others in similar positions to help those in need of an extra hand. “I came to the conclusion that the most needy people in New Zealand, where real progress could be achieved, would be with children who were having a hard start,” she says. “I was well aware of the poverty that many people experience and how hard it is to raise a family when there is quite simply not enough money coming in.”

Eliminating systemic poverty is a complex challenge, one which requires multiple organisations to work together. For that reason, Greive selected a number of charities working to eliminate child poverty, so that people would have the option of donating any surplus superannuation to more than one organisation at a time.

“There are no simple answers or solutions to child poverty and I wanted donors to have a choice of causes that would resonate,” explains Greive. Some people prefer to give practical donations that provide immediate support, such as blankets or food, while others want to see a longer-term benefit through mentoring, advocacy and further education. The charities with which Share My Super fosters long-term partnerships support the organisation’s collaborative approach. Dr Ang Jury, Women’s Refuge chief executive, compares the strategy to the philosophy of needing a village to raise a child.

“We need a village to deal with the sorts of issues that the whānau that use our services are experiencing,” she says. She emphasises that one charity can’t fix everything, but that by working together, organisations can create real change. “We all have our own particular areas of expertise and we have to work together if we’re going to achieve decent outcomes.”

The Wellington-based organisation has 40 affiliated refuges throughout the country. Each year, thousands of children come through their doors seeking an escape from domestic and family violence. Last year the charity provided 73,677 nights of accommodation, with 62% of their clients under 10 years of age. Providing these tamariki with a safe haven and helping them to ultimately return to a stable home life can help to stop the cycle of poverty.

“Poverty doesn’t cause family violence, but it certainly is a nice fertiliser for it. And we do know that one of the leading causes of poverty – and particularly of homelessness – is family violence.”

Dr Jury says Share My Super’s donations are incredibly valuable to Women’s Refuge. The untagged funding, in contrast to allocated government funding, allows refuges to buy “all of those little things that are really big things for the families concerned,” such as a week’s groceries for a family, a kid’s school camp fees, or a new school uniform. 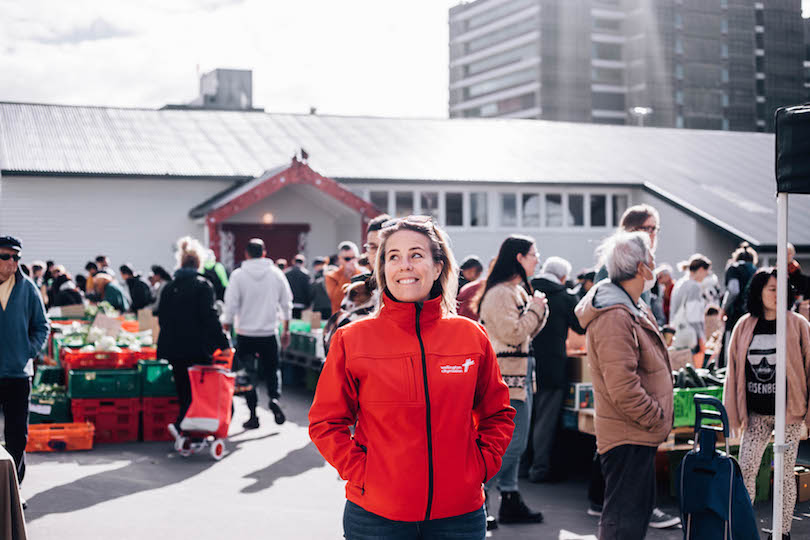 The Wellington City Mission is another charity partner putting Share My Super’s funds towards their work with children. This includes helping to advocate for whānau in need, ensuring they are in appropriate, warm houses, providing financial mentors to help families out of debt, and allowing them to shop for essentials at the charity’s new social supermarket. The shop, which opened in March this year, replaces the Mission’s traditional food parcel system and gives families more choices and dignity.

“Being able to shop for what your family actually wants and needs is so mana-enhancing,” says Kath Bier, the charity’s general manager of brand and communications. “It is the supportive donors, like Share My Super, that keep those shelves stocked and pay for our social workers who are walking alongside our shoppers as they shop.”

The new system of providing food gives social workers better opportunities to check in on how a family is managing at home, as often there will be bigger issues at play. “When a family comes to us for food support, that is just a manifestation of other stuff going on.”

Wellington City Mission works with a number of other charities and believes everyone has a part to play in the challenge of eliminating childhood poverty. “I know that the Mission encourages everyone to think, ‘What can we do?’” says Bier. “We all need to be thinking about it.”

When you donate to Share My Super, you have the option of giving to one charity, or multiple charities in one transaction. You can choose from a range of organisations, from Wellington City Mission, which is feeding families from its new social supermarket, to Child Poverty Action Group (CPAG) which works alongside the government in its efforts to eliminate child poverty. With founder Liz Greive funding the operating costs of the charity, 100% of donations go to the donor’s charity or charities of choice. While the Mission is hands-on, providing immediate support to families dealing with poverty, CPAG looks at the bigger picture, and aims to treat the root causes of poverty. The Auckland-based organisation produces evidence about the causes and effects of poverty on children and advocates for the needs of tamariki to be prioritised in government budgets and policies.

“We work constructively with the government to try and push them to keep children’s voices front and centre in any policy decisions,” says Laura Bond, executive director of CPAG.

One of CPAG’s values is kotahitanga: working collectively to uphold the mana of children. As well as working with Share My Super and the government, CPAG collaborates with other organisations, “particularly those that are the boots on the ground, working with people each day, understanding what the issues are.” The charity in turn provides research and policy support to a number of organisations to help inform their responses to the poverty crisis.

Share My Super’s funding supports CPAG in undertaking additional research that the charity might not otherwise be able to fund. “It’s a really critical income source for us in order to make sure that when opportunities come up, we can jump on them.”

The government has a goal of halving child poverty by 2028, and while there has been some progress on this front, there is still a long way to go. Jacinda Ardern says policies such as the Families Package, which increased financial support for low-income families, and free doctors visits for under 14 year olds have helped to reduce the number of children living in poverty. Stats NZ figures for the year ended June 2020 show that 11.3% of children were living in material hardship, down from 13.2% for the year ended June 2019 (material hardship is defined as a household going without more than six of 17 essentials).

However, CPAG is understandably still concerned about these statistics, particularly with nearly one in five disabled children, nearly one in five Māori children and more than one in four Pacific children living in material hardship, compared with just over one in 10 children overall.

It’s these statistics that motivate Share My Super and its charity partners to continue in their aim of eliminating child poverty. “The government has a strong focus on child poverty eradication, but things aren’t going to change for some time,” says Share My Super CEO Lorraine Taylor. “You can’t wait until systemic change happens. Kids need help now.”

* Share My Super founder Liz Greive is the mother of The Spinoff founder Duncan Greive.

You can give hope to the 1 in 5 children living in poverty by joining the Super Community today and helping to break the cycle of poverty so all Kiwi kids have a fair chance to thrive and succeed.