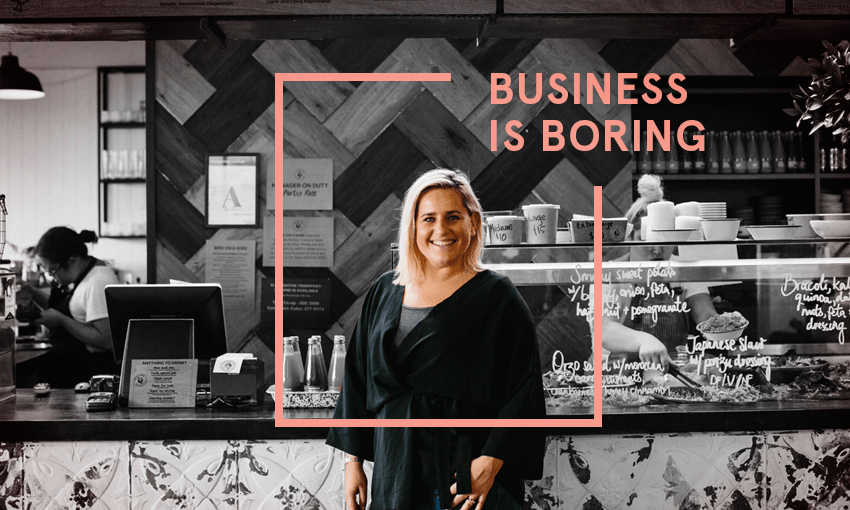 Business is Boring is a weekly podcast series presented by The Spinoff in association with Callaghan Innovation. Host Simon Pound speaks with innovators and commentators focused on the future of New Zealand, with the interview available as both audio and a transcribed excerpt. This week Simon talks to Sophie Gilmour about Bird on a Wire, a chicken shop grown from an old Ponsonby takeaway.

A few years ago a new kind of eatery appeared on Ponsonby Rd. It had rotisserie chickens that were free range, delicious salads and was in an old fish and chip shop so mainly takeaway. It exploded on the scene with queues out the door and sold out nights. From that first start Bird on a Wire became one of the fastest growing companies in the country, expanding into the city, and two new locations and a larger Ponsonby all-day site. Along the way the business has taken them to China for a pop-up; now their idea is going to get to even more people with exciting news. A national franchisor has bought the business, with an eye to rolling it our further, taking free range chicken and healthy salads to the people. Sophie Gilmour, co-founder and co-owner, joins me now to talk the journey from idea to exit.

Pulling together the business, so the brand, the concept, sourcing free range chickens, re-doing the fit-out and stuff… did you throw in your day job as a lawyer? Decide to go full chicken?

It was really back of the napkin stuff. We all thought ‘let’s bring the notion of a chicken shop to Auckland’, we all thought that would work. We thought that we’d ask one of our friends to whip up a bit of branding for us, which a friend called Anna Ko did, really kindly. One of us was doing his masters in music at the time, he was a real muso, so I think the way we came up with the name was to scroll through his Spotify and type in the words ‘bird’ and ‘chicken’ repeatedly until we found the Leonard Cohen song that we all love.

I think in terms of strategy there were probably four things that we all agreed on. We wanted the food to be ethically sourced and top quality, so quality was something we hung our hats on from day one. We wanted our business to be about the people, for the people. We wanted to work with like-minded people. The neighbourhood was important to us, we all lived and worked in Ponsonby at the time and we wanted to create something cool that contributed. And sustainability for us was something that we all were really aligned on early on.

We didn’t have an impact that was enormous at that time but we understood that as the business scaled, and despite being a kind of back of the napkin start, we were always ambitious that our impact would be considerable, so we wanted to set ourselves up to minimise the impact on the environment.

I remember when it started, paying attention to that spot, and it was great! Queues around the door, sold out nights, did that catch you by surprise or did it appear bigger and easier than it was?

It definitely sounds a lot easier than it was. We had a really great following from the start, the people who appreciated the food, the neighbourhood, the people, and the sustainability element of what we did, really cottoned on early, and those people are still Bird on a Wire fans now.

We had bootstrapped to the extreme, so we were paying finance to Marrick finance for the rotisserie loan, because no one else would lend us the money. We put ourselves in a pretty tight financial spot right from the word go, so we started looking into things like diversifying into the kiosk sites that we had in town, so I was still working as a lawyer at that point and there was nowhere to get a salad that you didn’t make yourself, really. I understood the area and the market and my business partners did as well, I thought well, let’s give that a go.

In order to utilise the resources we were paying for, like the rotisserie, we tried to diversify and get as many revenue streams going as soon as possible, so before we knew it we had two other kiosks, we had guys driving around going into ad agencies selling sandwiches and salads at lunchtime. Eventually that all caught up and our trade in store forced us to refocus and go back to the original model, but I definitely felt like we were head above water for a few years there.