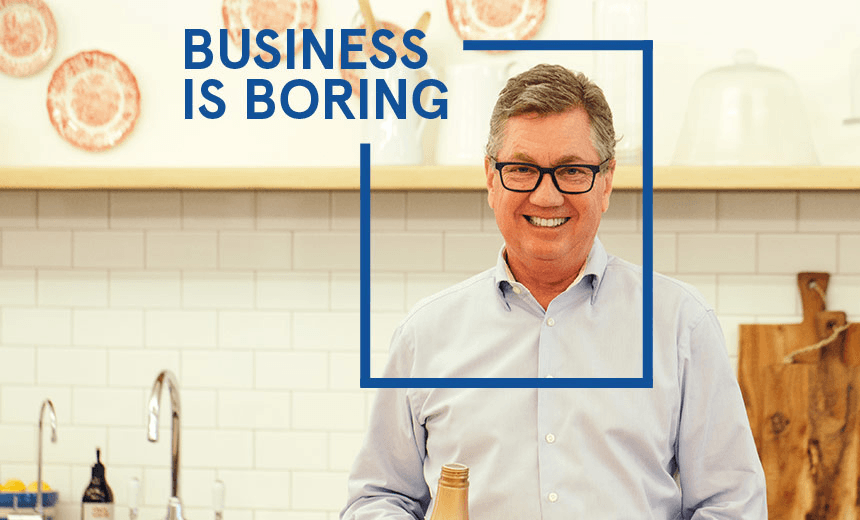 Business is Boring is a weekly podcast series presented by The Spinoff in association with Callaghan Innovation. Host Simon Pound speaks with innovators and commentators focused on the future of New Zealand, with the interview available as both audio and a transcribed excerpt. This week Simon talks to Lewis Road founder Peter Cullinane.

A few short years ago a fellow looking for some good butter for a baguette noticed something odd. Despite the fact we were a dairy country, if you went to the supermarket and wanted a fancy butter the only option came in a blue pack, all the way from Denmark.

Why and what on earth? This thought led Peter Cullinane to try to make his own top-shelf butter, and to then found and grow Lewis Road Creamery – beautifully made, indulgent and to-be-savoured dairy. It’s been quite a ride, with tales of security guards protecting their Whittakers Chocolate milk collaboration, sold out ranges, copycat milks and expansions into bread, ice cream and non-dairy milks. Lewis Road Creamery is a huge success, and part of that may be that it wasn’t Peter’s first rodeo. He’s an ad man who ran Saatchi & Saatchi in New Zealand and Australia, and then worked for them in a big role in New York. On coming home he co-founded Assignment Group, who have always let the work talk for itself, launching Hyundai here and helping Whittakers reach their most-loved brand position. He also co-founded Antipodes, the beautiful water in the elegant German bottle.

New Zealand [has a reputation for] producing the best milk and so on – actually our milk is just this side of being legal, with the added permeate, we do all sorts of things to our basic milks to stretch them. Which came as a huge surprise to me; I just assumed our milks would be the best in the world. Just like butter, that’s what we set out to do with milk.

Our original milk was organic jersey milk. And we just ran out of milk within the first three months I think. We just couldn’t get enough. And jersey milk is just the creme de la creme of drinking milks. But that proved to us again that if you produce a good product, people will flock to it. And they’re prepared to pay a premium as long as they’re getting what they pay for. The trick is, it’s got to be value.

We started with white milks, and that really changed the pace of Lewis Road. We wanted a bottle that paid homage to milk as it should be, which is why we have the bottle that we use. One of the great things, when we were launching milk, is that milk and bread are two of the most auto-bought things in the supermarket. People aren’t even really looking – they’re just reaching out from the corner of their eye. Just as we were launching, Anchor came out with their light-proof bottle, which was just a gift from heaven for us, because it forced everyone to think about the milk they were buying. So all of a sudden it was ‘am I going to take this light-proof bottle, which I don’t really like, or am I going to buy this bottle which looks like milk from when I was a kid?’ It gave us this incredible leg-up.

Then I was having lunch with Janene and James Draper from Farro’s, just a catch-up. And James said ‘you know what I’d like? A really decent chocolate milk. Can you do that for me?’

So that’s where that idea started. And through Assignment Group and before that Saatchi’s we had worked with Whittaker’s for about 20 years probably.

So I rang Holly Whittaker – and to her enormous credit, because for them the brand is incredibly important to them – she said ‘yep, you can do it. We’re with you’. So that’s where it started.

As luck would have it GVD, our bottler, only had the capability of adding powder, not liquid, to their milk. And Whittaker’s had just introduced this five roll refined chocolate, which is almost a talcum-like chocolate. So it just so happened that the only chocolate we could get from Whittaker’s came in powder form. And the only way GVD could make chocolate milk was powder.

And it took, probably, no more than 10 days to develop that product. Because it’s just chocolate and milk. And as you know, it went nuts after that.

The ‘going nuts’ part – how much of that was planned versus surprise? The security guards and so on: was that a real thing?

That I think was a real thing. The security guards were really there to control the number of people lining up and buying – because it was a remarkable story.

It really was! It was the lead story on the news. Were you pinching yourself?

I don’t think it’s ever happened in food like that. It was a black swan moment. We had no idea, and nor did Whittaker’s. And nor did GVD. So the shortages – hand on heart, they were not designed. They were simply a result of GVD having a small bottling plant that simply wasn’t geared up for the sudden demand which came in.

Then Whittaker’s couldn’t supply that amount of chocolate. It was just a constant supply problem. One which seemed to go on for years, though it was probably only six months or 12 months. But it was  a wonderful collaboration and remains that way. And there’s just something about it. As Kiwis we just love that stuff. We love little companies working together – it’s very much part of our DNA.