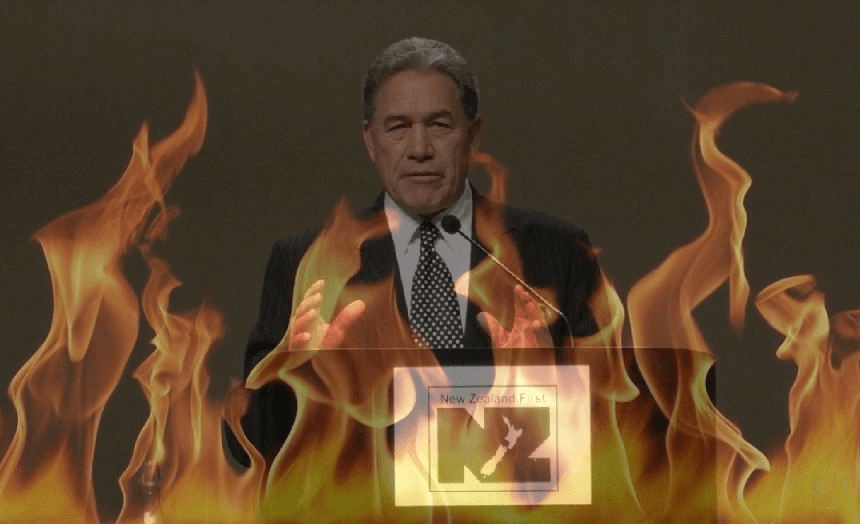 The New Zealand First leader took to the stage in Dunedin following a rousing, bagpiped Flower of Scotland. “We remember where we came from”, rasped the pin-striped, dotty-tied political colossus. And then he set about unleashing fiery missiles in every direction, to the delight of the assembled party faithful.

Which of his speechified flames burned the brightest, pierced the sharpest, plunged deepest into the flesh of his demonstrably pathetic Johnny-come-lately so-called rivals?

“John Key’s politics could be described as Keydashian. Keydashian politics: all photo opportunities, a fair bit of something else, and a shallow blokiness.”

They loved this reference to an emerging new youth trend in Dunedin, and who can blame them?

“Maurice! Maurice in one of the biggest economies in the world, on the west coast of America! So, I never thought in all the years I’ve watched Maurice in parliament that we was the sort of Castlereagh of the Pacific, or the Metternich of the Antipodes! I didn’t really think he was a diplomat … But there he is, another job for the boys.”

Some highbrow historical references over Williamson’s appointment as consul in LA, to offset the Kardashian allusions. Kid got game.

“His principles are about as genuine as his hair colour.”

Harsh burn. Harsh. Maybe it was the sea of blue-rinse flinching before him, but even Peters looked a little shocked. “Was that a bit rough?” he asked.

A timeless classic from the Peters songbook.

“I don’t want to be insulting, but surely they could get that through their heads rather than saying the stupid things they say day after day … But that disparaging attitude is so motivating.”

This came after a lesson on how NZ First performs better than it polls. Notwithstanding the obvious point that he does want to be insulting, and so do we all, this stock element of Winstonian rhetoric is going to get a lot of play in the next year, not least because the anti-elitist, anti-establishment – he used “commentariat and “beltway” many times in the speech, as well as bemoaning universities and political scientists – rhetoric has struck such a chord for Teams Brexit and Trump alike.

“The first nine shots he missed – and the tenth he bent the nail. And this is Mister Blokey New Zealand!”

Winston bangs the prime minister into the timber with one shot, behind his back, blindfolded, after a slug of single malt, over that Northland byelection indignity.

“Or was it Woodcock? Forget who it was. Or Woodhouse or whatever he calls himself.”

What a save from Winston. He at first stumbled, and couldn’t remember who he’d seen on TV saying something daft, then he got the name of the immigration minister wrong. But like the sharpest of politicians or ninjitsus or fourth formers, he pivoted, salvaged, and turned it all into a sick burn on Woodhouse’s name. Smash.

“They never had the intellectual fortitude, integrity, or outright decency to ask us on the programme… If you think you’re going to treat the fastest rising political party that way I’ve got news for you and it’s all bad.”

This is disputed by TVNZ, who say he was twice invited on the programme and twice backed out, but that’s just what you’d expect a media outlet lacking in intellectual fortitude, integrity, or outright decency to say.

“Have you ever seen a party who are so full of entitlement, or noblesse oblige without the class?”

There were a lot of pot shots at National. At one point he called them a “bum with five cheeks”.

“There are some in parliament who think that manual labour is the prime minister of Mexico.”