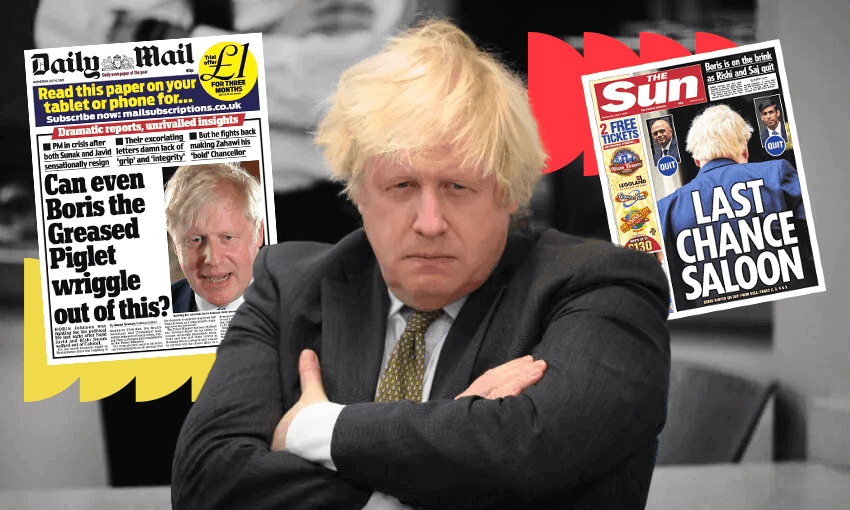 Even the Daily Mail is wondering if the greased piglet is finished.

Even the Daily Mail is wondering if the greased piglet is finished.

As two senior cabinet ministers quit in protest, even the loyal voices are suggesting the ‘greased piglet’ is on the brink.

The tousled blond bucking bronco of British politics is heaving and spluttering yet again, with the senior ministers responsible for the two most obviously critical issues of our moment – the economy and health – sending resignation letters to Boris Johnson, lamenting his “lack of integrity” and telling him that they cannot “in good conscience” continue in a government with him as prime minister. Boris Johnson continues to cling on, superglue slathered across his palms. The question – not for the first time, in fact for something like the hundredth time – is how long that can last.

In the space of a few minutes, the chancellor, Rishi Sunak, and the health secretary, Sajid Javid, told Boris Johnson they were done. Their decisions were prompted by revelations that the prime minister had known about 2019 sexual misconduct allegations relating to Chris Pincher, who resigned from his deputy whip role last week  amid claims of drunkenly groping two men at a members’ club in London.

Johnson had apologised for reappointing Pincher despite being aware of the earlier complaints. He has denied reports that he has previously said, “Pincher by name, Pincher by nature.”

Johnson moved swiftly to replace the pair of senior ministers, with Nadhim Zahawi moved from education to the treasury – according to the Sun’s political correspondent, Johnson had wanted Liz Truss to take the role but Zahawi had said he’d quit cabinet if it didn’t go to him.

There will be a bunch of other roles to fill, too. Apart from the two top-table ministers, eight other members of the Johnson government (junior ministers, parliamentary private secretaries and envoys) have quit in the last few hours.

The public rightly expect government to be conducted properly, competently and seriously.

I recognise this may be my last ministerial job, but I believe these standards are worth fighting for and that is why I am resigning.

My letter to the Prime Minister below. pic.twitter.com/vZ1APB1ik1

I have spoken to the Prime Minister to tender my resignation as Secretary of State for Health & Social Care.

It has been an enormous privilege to serve in this role, but I regret that I can no longer continue in good conscience. pic.twitter.com/d5RBFGPqXp

How bad is it for Boris?

Terrible. It’s less an aberration than the latest in a string of scandals, apologies, abject lies and internecine party bloodletting, the most conspicuous and damaging of which was of course the protracted “partygate” affair, which laid bare repeated breaches of lockdown laws and habitual dissembling, culminating in an unprecedented police fine.

A snap poll by YouGov in the last few hours tells the bitter story. It finds 69% of voters want Johnson to resign, against just 18% saying he should stay. Among those who voted Conservative in the last election, in 2019, there was still a majority – 54% – urging him to quit.

At least he still has the media behind him

Not so much. The Murdoch-owned Times has issued an editorial headlined “Game over”, declaring that the Tories have “no chance” of winning the next election with him as leader. Murdoch’s tabloid Sun, meanwhile, appears to be on the brink, as does his former employer, The Daily Telegraph.

Perhaps more important, as a former Sun editor pointed out the other day, is the indication that the Daily Mail, in many ways the most important (and pernicious, depending on your point of view) organ in Fleet Street, appears to have fallen out of love with Boris after an internal struggle. Putting “greased piglet” – a moniker for Boris from another former Tory leader, David Cameron – on the front page is no small thing.

About turn! Make no mistake, Paul Dacre has lost the internal argument with Jonathan Rothermere… the Mail titles have today suddenly turned on Johnson. Tory MPs, especially the new and naive ones, may not realise what this means…. It means he is finished…. pic.twitter.com/oPVPcT70Vt

So his MPs will vote him out?

That’s not as simple as it might sound. He survived a vote almost exactly a month ago, with 211 Conservative MPs who wanted to keep him as leader against 148 wanting him gone. Party rules mean that if you survive such a vote you get immunity from another such challenge for a year.

That’s not the end of it, though. If they’re really determined to defenestrate him in a hurry, MPs could vote to change those rules. A number of MPs seeking roles on the executive of the powerful 1922 Committee of backbench MPs are standing expressly with that ambition in mind.

"It's a bit like the death of Rasputin. He's been poisoned, stabbed, he's been shot, his body's been dumped in a freezing river and still he lives."

Yet former Chief Whip Andrew Mitchell MP says "it is over" for Boris Johnson's premiership#Newsnight pic.twitter.com/RDmpppspzt

Can he then survive?

Johnson has defied political gravity before – and is hardly given to humility. Just last week he said he was “thinking actively” about seeking a third term as prime minister that would take him through to the 2030s.

He is if nothing else a survivor. With all the trappings of bouncy British repertory theatre, “Operation big dog” in some form worked last time around, and the “pork pie plot” to bring down Boris failed. Theresa May before him resigned despite surviving a confidence vote, but she did not command the parliamentary majority that he does, and she had more – there’s no other way to put it – of a sense of shame.

Johnson is helped, too, by the lack of any standout alternative leader – though one of the just-resigned ministers could now seek to take that status. And the Labour leader, Keir Starmer, has proved anything but inspirational.

But among the bluntest rules of politics is that however obstinate, however desperate a leader might be, when an election starts heaving into view, parliamentarians’ minds focus quickly on whatever it will take to save their own political skins.