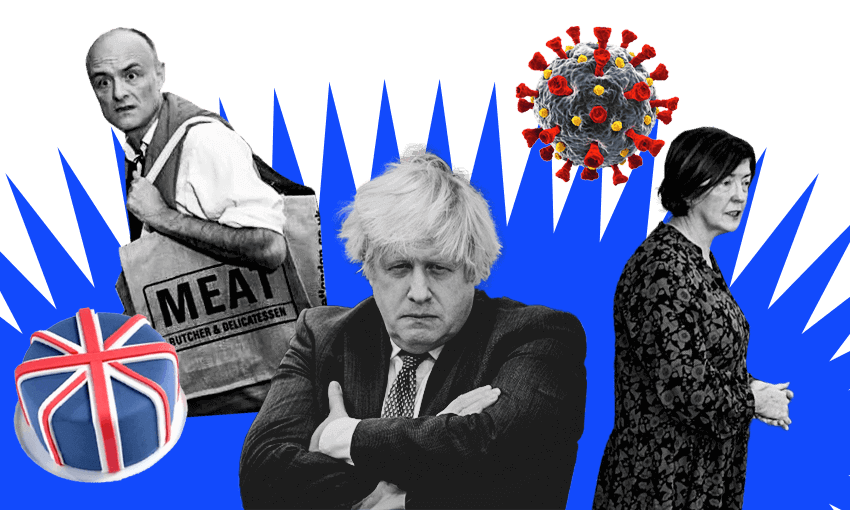 An introduction to the hair-raising and peculiarly edible concepts and characters in the scandal that could spell the end of the British PM, as commentated by Toby Manhire.

No one does political scandal quite like the British. The latest to engulf Westminster and leave Boris Johnson hanging by a zip-wire is at once sprawling and perilously simple: a series of parties held at Downing Street as the country was shackled in the most restrictive of lockdowns. The charge of hypocrisy is routine in all politics, but this was  no quotidian example of an elected representative getting stuff ordinary people can’t. The sacrifices of the past couple of years have left permanent personal and emotional scars: the indelible memories of families divided, funerals unattended, childbirth missed.

Johnson’s excuses have swung from they were work events to I didn’t know they were happening to, most audaciously of all, I didn’t know what the rules that I made were. The most consistent refrain in the last few weeks, however, from the PM and his ministers, has been: we can’t say anything about it until we get the Sue Gray report. That report, from the formidable civil servant, is expected any moment (update, February 1: Gray’s report was finally published this morning)

The clangingly obvious lesson for leaders the world over, of course, is that if you’re going to oversee new rules that impose near unimaginable curbs on liberties, you’d better be damned sure to adhere to those rules yourself. What I’m trying to say is that Jacinda Ardern and Clarke Gayford should definitely not relocate their wedding to the Downing Street backyard. But in the meantime, here’s a crib sheet: a glossary of the crucial “partygate” component parts.

The gate suffix has been cruelly rinsed of its power over the years by getting tacked on to the most trifling of skirmishes, but it earns its place here. At least 15, ahem, gatherings, within the offices of the PM and in the garden out the back, have been reported by the media, with varyingly outrageous and humiliating attendant detail, including a staff member breaking a child’s swing used by Johnson’s son, leaked photographs of what looked indubitably to be, well, parties, and video footage from December 2020 of a press secretary laughing while practising a response to hypothetical media questions about a No 10 Christmas party.

Probably the most conspicuous date: April 16 last year, when, according to reports, two leaving drinks events were held for departing staffers. A suitcase of booze was brought into the place by one person attending. There was a DJ. At the time, the country remained in lockdown with indoor gatherings forbidden. And in a painful bit of timing, the very next day the Queen would sit alone at Prince Philip’s funeral.

The name of the strategy, according to the Independent, to protect Boris Johnson by sacrificing various senior staff members and highlighting the prime minister’s achievements, such as “he got Brexit done”. The name was the brainchild, suggested the report, of Mr Dog himself.

A separate effort to alleviate pressure mounted by Downing Street was a government “policy blitz”, according to media reports. Not to be confused with the similar dead cat strategy, in which a major distraction is dropped like a dead cat on a dinner table, the red meat operation is designed to feed a Conservative backbench and voter base that had become increasingly emaciated after chewing too long on the deeply unnourishing partygate. The hope was that by loudly cracking down on terrible things like would-be migrants and the BBC, Boris’s aides might – thank you, Daily Mail – “save his bacon”.

Big dog. Red meat. Bacon. And – I’m not making this up – pork pie. That’s the name reportedly given to a would-be coup being plotted by a group of around 20 Tory MPs who have worked for leadership change. The name is not, sadly, because the insurgents sat around wearing pork pie hats, but because the purported host of the meeting, Alicia Kearns, is MP for Rutland & Melton, birthplace of the famous Melton Mowbray pork pie.

According to a loyal Johnson minister, the latest reports of a birthday party for Johnson in Downing Street in June 2020 had been overblown. The PM’s wife and a group of officials had taken him unawares by belting out ‘Happy Birthday’ and plonking a cake (iced with a union jack flag, naturally) before him. “As far as I can see, he was, in a sense, ambushed with a cake,” said Conor Burns.

Johnson told parliament he was “heartily, heartily sorry for misjudgements that have been made in No 10” yet his excuses and apologies for the firehose of revelations have bounded around like, let’s say, a big dog, and by commissioning an inquiry he created a kind of sub judice way to avoid answering the endless questions, a safe word in the form of …

A deeply serious senior civil servant in the Cabinet Office, Gray was once described by the BBC as “the most powerful person you’ve never heard of”. Everyone has heard of her now. Gray was tasked a fortnight ago with investigating from the Cabinet Office the myriad reports of lockdown-breaching No 10 parties. Regarded as uncompromising and incorruptible, Gray’s previous probes have seen a number of ministers lose their warrants, though this is another level, and Johnson is, after all, her boss.

The report – based on a study of correspondence and interviews with everyone including Johnson and Dominic Cummings – is expected to land on the prime minister’s desk at any moment, and he’ll reportedly have a couple of hours to ruminate on the findings before releasing it, presumably with redactions. Any chance of it being a damp squib or a whitewash were made all the more unlikely by the news overnight from …

The most senior police officer in the country, Met commissioner Cressida Dick (whoever comes up with the character names for the soap opera of The British Establishment deserves a pay rise), announced yesterday that a police investigation had been launched into “potential breaches of Covid-19 regulations” at No 10 and Whitehall. That investigation was prompted by and will draw upon evidence unearthed by Gray’s inquiry, she said. Among those who gave evidence to to Gray is …

Behold, a personality stranger and more compelling than anything fiction could conjure – though if fiction were responsible, Cummings would unquestionably be played by a computer animated Andy Serkis. Cummings first came to prominence as mastermind of the Vote Leave campaign for Brexit, later becoming Johnson’s chief adviser, a self-styled iconoclast Svengali. That all went skew-whiff when he was found to have driven across large parts of the country and taken a lovely visit to Barnard Castle in apparent breach of the stringent March 2020 lockdown.

Cummings survived that episode, but departed Downing Street in November 2020, and it wasn’t long before he became a thorn – a Shard-sized thorn – in the belly of Boris. Through every available medium, from blog post or tweet to select committee appearance or media briefing – Cummings seems to have become set upon vengeance with a dedication that would make Iago blush. His most recent contribution was to say that he insisted on providing written answers to Gray, so that Johnson couldn’t lie about what was said.

The backbench Tory MP who defected to the Labour Party, humiliating Johnson in the minutes before he faced parliament for Prime Minister’s Questions. We’ll probably never hear of Wakeford again, however, unlike …

A big beast of the Conservative Party, a former Brexit secretary and a man who came close himself once to being leader. He popped up from the backbench in PMQs on that same today, skewering his leader with the sort of thing that would in normal times make Johnson salivate: a political-historical quotation. “I expect my leaders to shoulder the responsibility for the actions they take,” said Davis. “So I will remind him of a quotation altogether too familiar to him, of Leo Amery to Neville Chamberlain: ‘You have sat there too long for all the good you have done, in the name of God, go!’”

The actions of Wakeford and Davis lifted the likelihood that we might hear from someone critical to Johnson’s fate, called …

As chair of the “1922 committee” of Tory backbenchers, Sir Graham Brady is the man to whom MPs demanding a change in leadership are required to secretly write. Once he receives no-confidence letters from 15% of Conservative parliamentarians (in the current equation, 54 of them), Brady will announce a vote. Should more than half of all MPs want him gone, he’s gone; but if he survives, he wins an immunity from leadership challenge for a year. No booster shots are available.

Timing is therefore of the essence. If the Gray report is damning, it’s highly likely the needle will tick over 54. With polls suggesting as many as two out of three voters want him gone, it doesn’t look sunny. For Boris and the machine, the big dog days are over.