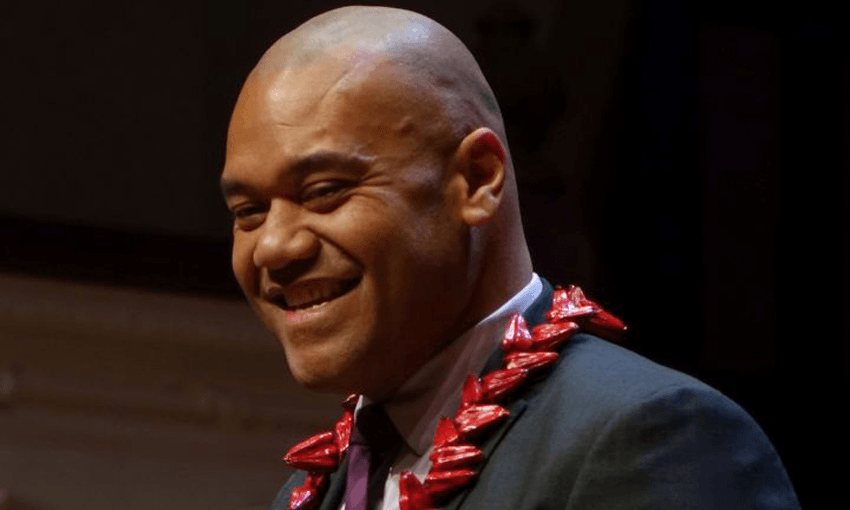 Fa’anana Efeso Collins says he has been reflecting on his future in politics after death threats were made against him and his family in response to comments about Police Ten 7. Justin Latif reports.

“God, not my girls” is the thought that immediately ran through Fa’anana Efeso Collins’ mind as he led a bomb squad through his home after being told an anonymous death threat had been made against him and his family.

The South Auckland councillor made the revelation at a church conference at Auckland’s Spark arena on Saturday. He told the hundreds gathered, while speaking on the topic of social justice, that when he was asked by police to come to the station he at first had no idea what to expect.

“I went into this interview room and they told me, ‘We’ve received a death threat, and it’s in the form of a bomb threat against you and your family’. They told me it’s been elevated to the point they would like to send the bomb squad to your offices and to your house.”

Collins said the threat was made six weeks ago via the police’s anonymous tip line in response to his suggestions TVNZ’s Police Ten 7 programme was reinforcing negative stereotypes about Māori and Pacific peoples. Police swept his home and his offices in the CBD and Manukau but no bomb was found.

“The doubts began to rise in my heart,” he told the audience with tears streaming down his face, “as I led a group of detectives with all this equipment through my home, while Fia [his wife] and my daughters were on the balcony.”

Collins said he’s had moments where he’s questioned if he should stay in politics. “I feel like my confidence has taken a dent and I’ve had doubts around whether it’s worth the safety of my family to continue in a political role.”

But he’s come to the decision, along with wife Fia, that they can’t let the threats deter them from what they see as their calling as a couple. “I also felt that they would win, if I changed my life.”

Collins said police asked if he had received racist or abusive emails or messages prior to this but he said because he receives so much, he’s almost become immune to it and he’s even created a separate folder on his work computer to file them all. “In the recording of the phone call they said: ‘Efeso is a racist’ because of my complaints about Police Ten 7 – so it’s obviously racially motivated. But the police have been really good. They were really sensitive and thorough.”

Collins told The Spinoff he chose to share this experience at this church event as he hoped it would encourage others wanting to fight injustice that while hard times may come, there’s also ways to deal with the challenges.

“There’s a cost when you’re trying to make a difference and I wanted to share that with them. But also that having a faith has reminded me I can turn to a source that’s beyond me, and I can find strength from that.”

Fia Collins said she’s always known there was a nasty side to politics, “but nothing prepares you for the news of a bomb threat. I know this is a call on our lives, and so we have to accept to a certain extent the good, bad and ugly. And this is the ugly part. But for us, we are grateful more than anything, as we get a sense that a lot of people are supporting us, and it means the world to us.”

Following a week that has seen further reports of gang-related shootings in his Manukau ward, Collins said he’s been offered personal security by council but he’s turned it down as he believes it would draw even greater attention to him and his family. “I look at the people that I serve, and the difference I have from them is/ what I’ve gone through is a bit more public, but many others are going through similar stuff.”

Police are continuing to investigate the threat and are asking the public to share any information they may have.

In a written statement, a police spokesperson said: “Police can confirm a report was received about anonymous threats made towards an Auckland councillor on June 19. These sorts of reports are taken seriously and extensive enquiries were made into this particular matter at the time. At this stage no arrests have been made and the complaint has been filed pending any further information. If anyone has information they wish to provide, they can do so by calling 105 and quoting the file number 210619/6156.”