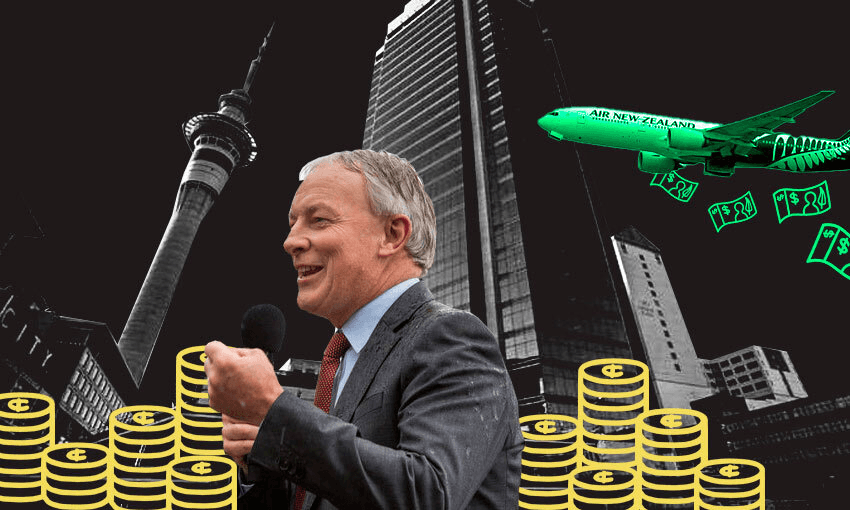 After another revenue-crippling lockdown, Auckland Council has some hard decisions to make if it wants to fulfil its commitments to tackling climate change. Mayor Phil Goff says a new targetted rate is the way to go.

Up to a billion dollars could be invested into climate change initiatives over the next decade under a range of new proposals announced today by Auckland mayor Phil Goff.

In a morning press conference, Goff revealed that he will be seeking support from the public and councillors for a new climate action targeted rate (CATR) to be introduced in next year’s annual budget. The new fixed rate, which is separate to general rate charges that are based on council valuations and property use, is predicted to raise $574 million directly, with a further $471 million to come through co-funding arrangements with central government. With the rate paying for significant upgrades of Auckland’s public transport system, including the purchase of 66 low-emissions buses and the establishment of new routes – meaning 170,000 more Aucklanders will live within 500m of a bus stop – it is expected to have the effect of generating more council revenue from increased bus and train usage. Plans will also invest $228 million for walking and cycling infrastructure and $13.3 million for tree planting in areas like Māngere and Ōtara, which have the lowest urban canopy coverage of any suburb in Auckland.

Goff says this is the “most significant action taken by this or any council to respond to climate change”.

“For a person with a median-value home worth $1.18 million, the Climate Action Targeted Rate will represent a contribution of around $1.10 a week. So what I’m proposing meets the requirements of prudent financial management of our funds and with the climate action targeted rate, it’s council showing some vision for the future and being prepared to act to preserve the fundamental needs of kids growing up in this country,” he says.

“We’ve declared a climate emergency, we’ve adopted a climate action plan, and so we’ve now got to walk the talk. Climate change is happening right now and so we need to respond with urgency.”

Council’s chief economist unit estimates the Auckland economy lost between $85-100 million per day during level four lockdown and $50-70 million under alert level three. Goff says not only has the latest lockdown had a major detrimental impact on council’s revenues, but with rising interest rates and inflation, council does need new forms of revenue, along with finding further savings.

“We have been selling surplus non-strategic assets, and leasing out or selling car parks, and we’ll continue to do that, and continue to search for savings and value for money – so I’ll be pulling all those levers.”

‘You never sell the house to pay for the groceries’

One lever Goff won’t pull, however, is selling some of council’s big ticket assets, like its airport shares. Council officials have presented councillors a range of options on how it can service debt and meet its spending obligations, including the proposal to sell its 18% share in the Auckland International Airport, which is said to be valued at around $1.5 billion.

“I made a very clear commitment at the last election not to sell any shares in Auckland International Airport or Watercare, and I intend to honour that commitment,” says Goff.

He also points out that before Covid hit, the shares were netting ratepayers $60 million a year in dividends.

“You never sell your house to pay for the groceries,” the two-term mayor says. “The advice I’ve got from officers is that while you might free up money in the short term, it comes at the cost of reducing our revenue stream in the long term. If we were to sell the shares, the cost would be the equivalent of a 3% rate rise.”

But Manurewa-Papakura ward councillor Angela Dalton isn’t keen to write the proposal off just yet. She argues there must be better ways to fund council’s climate change plans than new rates. “We pay a lot of interest on our debt so what’s the best thing to do?” she asks. “Do we get a cash injection and pay down the debt that will save us more money than we get in dividends from the airport? That’s the value of having the conversation.”

She says the decision not to consider selling shares or any significant asset has been driven by “political mandate” rather than logic.

“At the last annual plan, we didn’t even have the discussion. But if we continue to increase rates, who’s going to want that? I don’t belong to any political party, and so I like to go in there without having to toe the line on an ideology or policy. There’s a lot of people who are struggling in this current crisis. And there’s a lot of things we need to invest in, and we can’t continue to rate our way out of that.”

Fellow South Auckland councillor Fa’anana Efeso Collins is on Goff’s side of the issue. “I am proud of the decision the people of Manukau made many years ago to buy and retain airport shares so the dividends could support the aspirations of the city,” he says.

“Flicking off airport shares now, when prior to Covid they were making us $60 million per year, is a mistake in my eyes. I acknowledge that our revenue hole is gaping and will take time to rebound, so we need to find alternative forms of revenue that will give us the ability to reach a financial holding pattern.”

Collins says one way to solve its budget issues would be for central government to return GST on rates back to councils. “I would welcome a serious conversation with central government about more of the nation’s tax take being shared with Auckland Council.”

Goff agrees, saying such a policy would be worth “several hundreds millions a year” to council coffers.

“We were created as a supercity, covering a third of the country’s population, and we’ve been confronted with a massive deficit in infrastructure that we have needed to build up. So if local government is to play a real role in the governance of this country we need devolved forms of revenue [like sharing the GST take].”