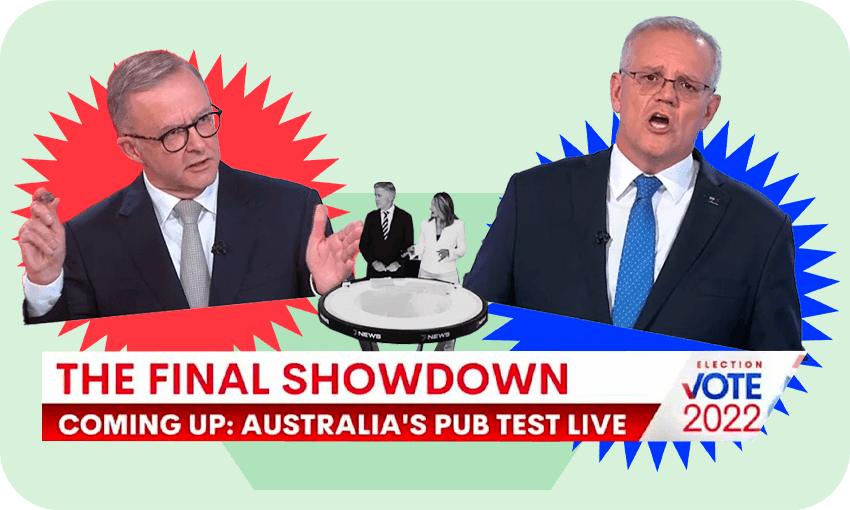 Scott Morrison and Anthony Albanese were urged to swap acrimony for friendliness in a contest that resembled a vicar debating a robot, writes Toby Manhire.

After a second encounter so savage and unsporting they should have checked their pockets for yellow sandpaper, the moderator for the final election debate in the Australian election campaign opened up by exhorting Scott Morrison and Anthony Albanese to keep it bloody civil. “This might be the most crucial hour in the political lives of these contenders,” said Seven News political editor Mark Riley, setting the scene for the Final Showdown. “Gentlemen, we know you’re not friends, but can we be friendly tonight? We want you to engage, but not disrupt each other.” Watching in New Zealand, at a quarter past 11pm, all I could see was dance boss Barry Fife in Strictly Ballroom: “There are no new steps! I unequivocally state there are no new steps for the Pan Pacific Grand Prix.”

The two gentlemen – both in dark blue suits, both in their 50s, both bespectacled – began with two-minute stump speeches, culminating in terrifying time’s-up music straight out of The Weakest Link. The pitches were clear from the off: keep me as prime minister, said Liberal leader Morrison, or risk everything with this chump who struggles to remember facts; if you think things are shit, let me tell you, things could be shitter. Labor rival Albanese countered: I’m fine, actually, and it’s time for a change, an important change, but don’t freak out, not too much change.

Morrison, who revels in argy-bargy, had found a way to keep that instinct in check: behave as though the other guy isn’t there at all. All night, he stared straight down the barrel, into the living rooms of the nation. Even with 2,000km of ocean between us he managed to make me feel deeply uncomfortable. He was a talking point vending machine, so expertly programmed that every answer filled every available second. Only when Albo was talking did ScoMo look troubled, contorting his jaw to stave off the dreaded resting smirk face.

Like a dad turning magic tricks at his kid’s birthday party, Albanese fumbled a gold coin from a hiding place and held it aloft, to show the people at home what a dollar looks like. “The idea that one dollar, one dollar, Scott just spoke about the strength of the economy that he said is there, the idea that those heroes of the pandemic,” he said, putting down the coin and giving up on the sentence. He was defending his earlier comments backing an increase in the minimum wage by a dollar an hour. Morrison was repulsed, sickened for Australia at the sight of his rival’s profligacy and failure to leave all that to the Fair Work Commission. He looked like he was about to puke. Albanese, who is reminded at every turn about the time he couldn’t remember the unemployment or official interest rate, was a “loose unit when it comes to the economy”, Morrison said, in a line that more than any sums up the Liberals’ argument for another term.

Morrison did not produce a lump of coal. On climate change he was a joke – torn between his carbon-puffing Coalition partners the Nationals and the hazards of the teal independents, all he could do was make some noises about technology. Both were steadfast in their commitment to continuing Australia’s shameful policy on “boat people” and offshore detention.

The Labor leader’s attack lines, meanwhile, were eerily similar to the New Zealand National Party’s criticisms of Jacinda Ardern. People might say “thanks for everything you did in the pandemic”, but that wasn’t enough, said Albanese. And by the way, he added, the vaccine rollout was too slow, as was the procuring and distribution of RATs. On the economy, clumsiness and indifference had created a cost-of-living crisis for ordinary people “doing it tough out there”. The cost-of-living crisis was a global thing, countered Morrison, they’d provided relief for families, they’d cut fuel tax; and Australia had done better than, say, New Zealand.

“All they have is abuse and scare campaigns, fear campaigns,” charged Albanese, and that’s hard to argue with. But it seemed beyond him to paint a picture of how Labor might make Australia better and brighter. Morrison tried eagerly, but fruitlessly, to fish out another flub on the economy from Albanese, searching for his version of John Key’s famous 2011 “show me the money” moment, a debate line so good it inspired the motion picture Jerry Maguire 15 years earlier.

Albanese had edged it, came the verdict from the undecided voters in marginal seat pubs, where Seven had installed cameras and ballot boxes, and treated the results from a handful of randoms with the reverence of election night numbers. “Well done Australia out there in pub land,” said one commentator on the official post-debate panel. “A convincing win for Anthony Albanese,” said another.

As far as debates go it was tolerable enough. Australia was not disgraced. The ground was covered. But good luck finding even a breath of inspiration. As Albo-versus-ScoMo ticked through midnight, I felt like I was watching a squabble between a sitcom vicar and a smug robot.