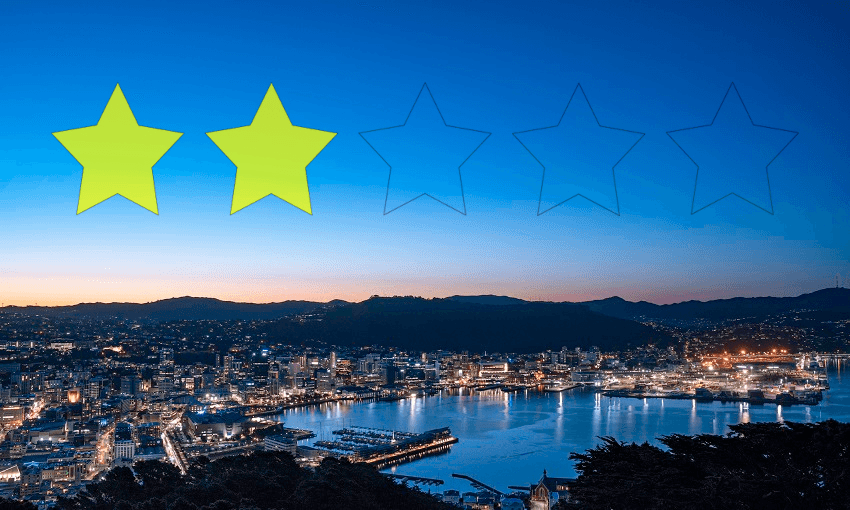 On my last night in Wellington, I went to see Hollie Fullbrook and Nadia Reid play a show at The Opera House. As the encore wound up, Fullbrook announced they were going to finish with a “love song to Auckland”. The crowd booed. It was ‘Dominion Road’ by The Mutton Birds.

First of all Wellingtonians, how dare you? I’ve seen more diversity waiting for noodles on Dominion Road than I did in the four days I spent in your frigid southern outpost. But that’s far from the city’s only issue. In 2013, John Key said “the reality is even Wellington is dying and we don’t know how to turn it around. All you have there is government, Victoria University and Weta Workshop.” This year, Wellington-based Stuff reporter Thomas Coughlan wrote “Wellington is a city in strife. The former cultural capital is a deflated pavlova of crumbling, overpriced and underinsured buildings, built on congested streets, layered over rotting sewer pipes, latticed over symphonic fault lines.”

Both were too kind. Wellington is a topographical torture chamber locked inside one of the wind socks they keep outside car yards. Auckland is built on top of 50 volcanoes. I’ve spent more than 30 years in that city, and never experienced a physical challenge more strenuous than traversing the peaks and bluffs between Newtown and my accommodation on Mt Victoria. At one low ebb, I saw a vision of hell, filled with thousands of screaming demons. It was the Mt Victoria Tunnel.

Wellington’s roads are either precarious goat tracks or soulless runways like Adelaide Road. Its buses are broken. Its leaders have been driven mad by the buffeting wind whipping off the Cook Strait, and have ceded their power to a cat.

Worst of all, it’s unaffordable. Even though the thought of living in Wellington is viscerally disgusting to a large proportion of New Zealanders, the city is dealing with the country’s second-biggest housing crisis. Rents are as eye-watering as they are in Auckland. House prices are nearly as horrible. That’s partly the fault of the city’s geography, which forces builders to carve houses into cliff faces.

The Reserve Bank could also shoulder some of the blame, for its never-ending Briscoes sale on interest rates, and the government should too, for its terror at the prospect of taking even a single dollar of our property-owning class’s capital gains.

But mostly it comes down to planning rules which restrict housing supply. Large swathes of Wellington’s inner city suburbs, including Newtown, Berhampore and Mt Cook, are subject to strict heritage protections. Buildings built before 1930 are not allowed to be demolished, even if they’ve rotted into unliveable, mould-ridden disrepair. The council has also imposed nonsensical height limits on new buildings in those areas.

These rules make it hard for private and public developers to build affordable housing in the places people want to live. The city is being squeezed like a stress ball, its growth bulging out to places like “the Hutt” or “Whanganui”. Wharangi/Onslow-West councillor Rebecca Matthews says Wellington is already about 10,000 houses short of what it requires to accommodate its residents, and needs to house 80,000 more in the next 30 years. Supply hasn’t just failed to keep pace with demand. It’s been lapped and is now smoking a dart on the side of the track. Many non-homeowners have little choice but to live in falling-down old fridges.

Matthews blames that housing shortage on previous councils pandering to existing homeowners. Wellington council’s spatial plan is meant to address that imbalance, cutting some of the city’s most draconian heritage protections and restrictions on housing. In a development nobody could have predicted, that’s being opposed by a property-owning set, who say enabling more housing could rob Wellington of its character and turn it into a hellscape like Utrecht.

They have allies in councillors like Nicola Young, who says building the high-rise apartments necessary to address the city’s housing crisis would be “tragic” as “some cottages will lose sunlight”. Meanwhile, the Green Party-aligned councillor Iona Pannett has consulted with a diverse range of old, white people and come to the conclusion that compromise is needed on the issue of letting young people afford houses.

Isla Stewart, a spokesperson for pro-housing group A City For People, says opponents of the spatial plan sometimes exhibit magical thinking, wanting to preserve Wellington exactly as it is, while still providing affordable housing for everyone. “We want the city to change, and be better for everyone to live, and there’s another section of people who want the city to be preserved in amber. Sometimes they’re insulated from the problems in our city. They don’t experience it. Our job is to talk about how everyone else lives in the city.”

Matthews is one of the councillors resisting the siren call of the homeowners. Her perspective is informed by her current experience as a renter. “Renting in my twenties versus renting now in my forties – there was so much choice. It was affordable and if I didn’t like a place I could just go somewhere else. That’s not the reality now, and also you can’t save if you’re renting,” she says.

Though she’s sometimes accused of trying to overhaul Wellington, Matthews wants to restore it to the type of city it was even quite recently, before housing costs spiralled out of control. “I don’t think existing homeowners should get to veto whether people get homes,” she says. “Fundamentally I believe housing is a human right, and it’s a basic job of a city to house its people.”

In truth, every city has its quirks. Wellington may have ceded too much power to Mittens, but the closest thing Auckland ever had to a celebrity animal was the zoo’s polar bear, Chimo, who died of sadness. Even Dominion Road is haunted by a giant translucent demon. It has weathered those challenges, and taken some tentative steps toward becoming a decent modern city, partly thanks to the passage of its housing-enabling Unitary Plan.

Wellington still has its cafes and its craft beer. The view from the top of Mt Victoria is good if you survive the ascent. But you can’t claim to be the world’s coolest little capital while torching the home-owning aspirations of half your population. Some flaws are forgivable. Leaving poor and young people locked out of your city so you can maintain your evening amble through rows of decaying villas is not.