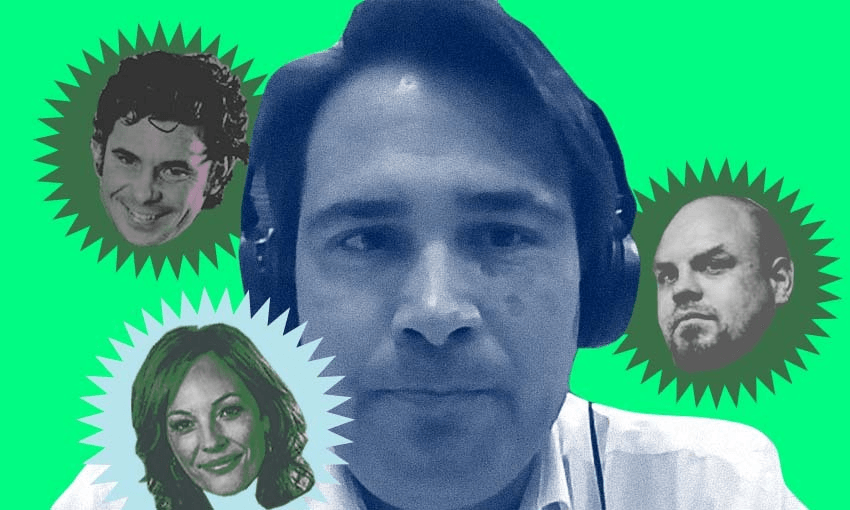 ‘I’m just a regular dickhead’: We grill Simon Bridges on his shock exit from politics

After this week’s surprise announcement that he’s chucking it all in, the former National leader and self-described ‘over-discloser’ spills the beans on The Spinoff’s politics podcast.

Simon Bridges drew the curtain on a colourful and sometimes controversial parliamentary career this week, when he took almost everyone by surprise in announcing that he’s out of there. The former cabinet, former National leader, current finance spokesperson and renowned slushie-loving yak whisperer told a press conference: “In the end, we all, in careers and lives, make significant decisions where we weigh the pros and cons. At 45, [after] 14 years in parliament, it’s a good time for National, it’s a good time for me, and it’s a good time for my family.”

And he “literally did do up a pros and cons chart”, Bridges has exclusively revealed to The Spinoff’s politics podcast, Gone By Lunchtime. He refused to be drawn on whether or not the visualisation had been audited by Treasury or Paul Goldsmith.

Bridges said: “It’s not an overnight thing. You have days when you wake up and think, ‘man, I love politics, I took it to Grant Robertson, that was amazing, I could do this forever.’ And then you have other days when you think, ‘what are you doing, Simon? There’s a real world out there – life and children and whānau and fun and happiness.’ What happened for me was that over time those days became many more than the ‘I need to stay in politics’ days.”

On the timing of the announcement, Bridges said he had planned to tell his caucus and hold a press conference last week. “But I was isolating with Covid and I couldn’t do it live in front of my colleagues. I thought that was important. And then we got a good poll and that seemed to me nice timing.”

It was a shame that political journalists leapt to ask whether there was some kind of scandal behind his decision, said Bridges. “I find that so sad, that that’s the way people think … There have been so many scandals in my career that have nearly killed me. Why the fuck would I leave for one now? This is not a plausible storyline. I fight my scandals in parliament, not out.”

Among the “wild conflagrations” that have plagued Bridges in recent years were attacks from Jami-Lee Ross and Judith Collins, both of whom, reckoned Gone By Lunchtime’s Ben Thomas, “opted basically to destroy their lives and careers just to get at you. So I’m wondering: are you retiring to do a course on how to be a bit easier to get along with?”

“I have enjoyed all of it,” Bridges responded. “I don’t know how I somehow justify this passion in people. I’m just a regular dickhead, there’s not more to it … Because you’re right, they have exploded. They exploded on me.”

Asked by Annabelle Lee-Mather “who people would be surprised to hear you actually like in parliament”, Bridges nominated the long-serving Labour MP and speaker of the house, Trevor Mallard. “I cannot believe I’m saying this,” he said. “At least he’s got a bit of something about him … He brings a bit of flavour and colour to the game. And we all need a few bitter, twisted men in parliament.”

On the upcoming byelection in his seat of Tauranga and speculation that Tania Tapsell, East Coast candidate in 2020, could fit the bill for National, Bridges said he wouldn’t get involved in the selection process, but “as a person, she’s high calibre, fantastic … It’s a crying shame she didn’t get in, but it was a terrible election for us.”

The talk around Winston Peters was unlikely to come to anything, Bridges reckoned. “Tauranga is a very different city even to when I first became member of parliament [in 2008]. It’s new builds. It’s acai berries. And it’s also complicated issues around homelessness and crime. It’s a very dynamic little city. It’s 20 years too late for Winston. It’s just not his kind of town any more.”

Pressed on his future plans and whether he had signed any commercial or media deals, Bridges said: “No, there are no signatures yet. I am exploring. I’m not going to be overly coy with you. I have been talking as I explore, because one is not entirely stupid and does need to keep the wolves from the door. But the exploration continues.” His references to potential media spots were simply “shameless boosterism to see what happened”.

Asked about whether he could end up regretting abandoning a path that might have one day led to the ninth floor of the Beehive, Bridges said – noting a self-sabotaging tendency “to over-disclose” – that his remaining scenario for becoming prime minister would have needed to be in the mould of a John Howard or Bill English, who both spent long stretches overseeing the purse-strings before moving to the top job. It would have meant “doing the hard yards and some significant amount of time getting there. But I’d be older, fatter, greyer. My kids would be 20, they may or may not talk to me. So that was all in the pros and cons.”