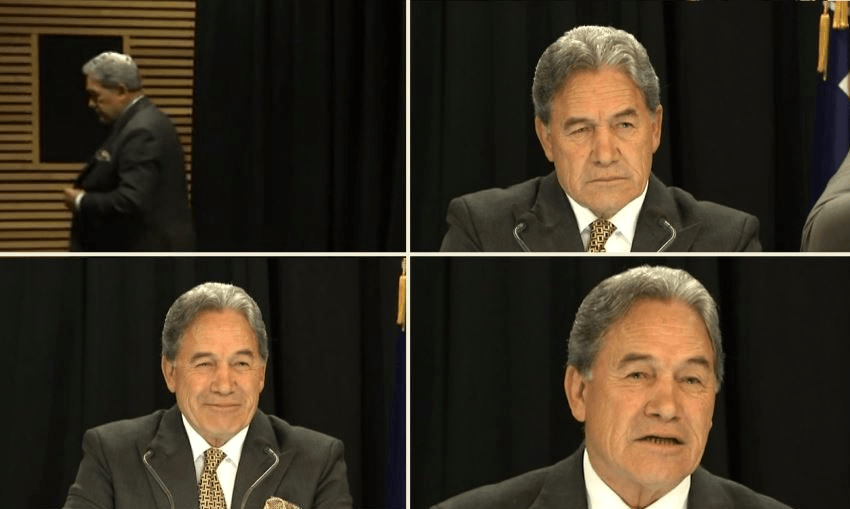 ‘You could say it’s a curtain raiser’: Winston Peters takes the maternity-cover stage

Winston Peters has assumed prime ministerial duties from Jacinda Ardern – well, some of them – as she prepares to go on maternity leave. Toby Manhire watches (thanks Newshub) the weekly set-piece post-Cabinet press conference.

In late September 2017, Winston Peters stood before the parliamentary press gallery in the Beehive Theatrette and evacuated a bellyful of brimstone. With post-election negotiations under way, he was at his grumpiest, gravelliest, squintiest worst, admonishing the media’s “speculative drivel”.

Nevertheless, this is a captain’s run of sorts. The majority of questions put to him relate to the imminent stint of proxy premiership. Compared with the blowtorch approach from September he is restrained today, but there are enough distinctive flourishes to suggest the coming weeks will be, if nothing else, entertaining. “Media accountability” gets a mention. So does “journalistic laziness”. He repeatedly reminds us all that he’s been here before, 23 years ago. And he says things like “prognostications”, because of course he does.

David Clark, the health minister, is there, to address the decision by the nurses’ union to reject a new pay offer which was “the best offer that we could put out there”. Clark is disappointed. “We’ve sent a clear signal that we have to make sure, and the DHBs have to make sure, that there are contingency measures in place,” he says.

Winston Peters soon sends him on his way. “I think that we’ve covered the subject as comprehensively as we could possibly do it.”

Next to some questions on Pike River, following news about progress in plans to re-enter the mine. Do Peters’ earlier offers to be the first to go back in there stand? Of course they do, he says, reminding us of his experience down-mine, but why are the media so interested in that line of questioning. “Maybe it’s because you care about me,” he grins.

But when will he become acting PM proper? “Things will come to fruition,” he soothes.

OK, but how would he get word that it’s time? A long pause. Then: “If you want to know there are five variations of how I get told.”

What are those five variations, asks basically everyone.

Not that he’s been thinking about it at all, obviously.

“Maybe there’s 10 variations,” he teases. “But I’m giving you five. Is that adequate for you?”

And after some volleying back and forth about the nature of his capacity at this very moment at the podium, he says, “You could say it’s a bit of a curtain raiser, couldn’t you,” unleashing a grin bright enough to light up his golden tie and golden pocket handkerchief.

There are a handful of questions about Peters pursuing legal action, including against his own attorney general, over alleged privacy breaches relating to his superannuation details. Of the controversial “no surprises” rule, he says: “It’s got to be a surprise for it to be a no surprises policy. It can’t be malicious gossip.”

The nearly but not quite acting prime minister spars with the press over comments from another publicity-shy NZ First MP, Shane Jones, and Fonterra, and whether his statements calling for chairman John Wilson to take a hike were covered by Chatham House Rules or not. Jones’s only mistake, Peters asserts, was that “people would keep their word”. But at the same time, Peters points out, “we made our comments on Fonterra … a long, long time before the last election”.

Probably the most telling part of the press conference, which we could say is a bit of a curtain-raiser, couldn’t we, is the way that Peters after batting a way a few questions of Fonterra, when he’s asked something about another topic – trade – he lassos it back to the contentious nerve. He can’t let it go.

And later, after drawing the press conference to a close and stepping off the stage, he bites at Newshub’s overtime questions about whether he had sought to abandon the post-cabinet pressers while he’s in the seat. Where a Key or an English or an Ardern would ignore those questions with a smile, stare ahead and march to the exit, not Peters.

“Look, I’ve answered all these questions,” he says, while continuing to answer questions. Can’t let it go.

Whatever happens in the weeks to come, expect him to continue to fly towards the flame.