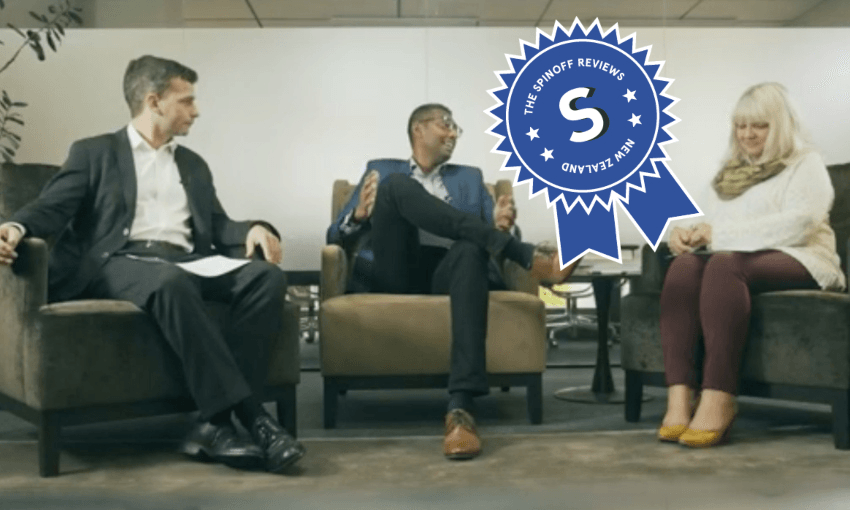 We review the entire country and culture of New Zealand, one thing at a time. Today, ACT has launched a podcast called Politics in Full Sentences as part of their party-wide rebrand. Media and politics nerd Alex Braae watched the first episode on Youtube.

There’s always a question creators of new media products or content series should ask themselves: who are we making this for, and why?

Sometimes the answer is very simple. Commercial broadcasters with existing audiences do things to keep said audiences, thus pleasing advertisers. Public broadcasters have a more amorphous mandate, but it’s still fundamentally about finding audiences and giving them what they want, or what someone has decided they need. But what about political parties? Must their media products by definition always tend towards propaganda? And if so, what’s the point?

Labour had that problem with the old Red Alert blog. In the heady days of the early 2010s, when blogging looked set to become a hugely important force in political communication, it made a lot of sense. But it got really weird, quite quickly. Was it for press releases? Was it for personal reflections? Was it a forum to debate ideas? An arena to fling shit? Nobody really knew, and it quietly died a mostly unlamented death around the middle of the decade.

So it is with the pivot to podcasts it seems like everyone is doing now. Jami-Lee Ross has a podcast, for some reason. Samuel Levi turned his Married at First Sight fame into a podcast. Some idiots here even decided it would be a good idea to podcast their way through the Cricket World Cup. The point is, everyone has a podcast now, no matter whether there’s a good reason for it or not.

So, with the ACT Party now becoming the latest podcast launchers, it’s worth taking a closer look. Does it work? Does it make sense as a media product? Are there any redeeming features of it whatsoever? Let’s go through it point by point.

Straight away, it’s dreadful. Politics in Full Sentences is the sort of name smug, self-superior assholes would give their podcast. It’s like that execrably arrogant Radio NZ slogan on billboards at the moment, ‘Drive Drivel Free.’ The person who thinks they’re the smartest in the room is almost invariably the most irritating too.

I’m not exactly sure what I was expecting here, but it features party leader David Seymour, deputy leader Beth Houlbrooke, and sitting in the hosting chair is party president Ruwan Premathilaka. It’s a surprisingly dull lineup, for a party that has always featured – for want of a better description – genuine personalities, like Mad Dog Richard Prebble, Donna Awatere-Huata, or the original Dancing Star politician Rodney Hide. This presentation of ACT is curiously bland by comparison.

Podcasts involving people sitting around talking are really really hard to get right, which is proven about 25 seconds in. Premathilaka introduces the guests, and throws out the first question. It’s an important moment, and he gets caught between gravitas and flippancy in asking, “The budget has been on everyone’s mind, and I think a common question is, what the hell is going on in Wellington?” It’s pretty much the exact same line as was delivered by the robot DJ in that episode of The Simpsons, “Looks like those clowns in Congress did it again. What a bunch of clowns.” The chat doesn’t really improve much from there.

There are some signs of life here, with the podcast becoming a platform for delivering soundbites. Around the 4.45 mark, David Seymour does the Third Umpire TV signal with his fingers, and it cuts away to a Jacinda Ardern press conference, where she talks about what has been delivered for teacher unions. It really makes watching the podcast on Youtube, rather than just listening on iTunes, a much more rewarding experience. There’s at least two cameras too, which seems like a lot of expense to put towards the product.

Clocking in at just over 20 minutes, it’s not onerous and intensive in the way that a lot of modern podcasting is. It turns out full sentences can be delivered quite quickly after all. Then again, at times it feels like a very long 20 minutes.

Around 13 minutes in, David Seymour utters the line, “and I know Beth will back me up on this.” And there, after what feels like a week of being trapped in a room with these people, is the central problem with the whole exercise. Every person agrees with every point made by every other person at every single moment of it. It’s interminably, crushingly boring to listen to. It’s only at the very end that anything happens, and that’s just a case of Seymour unloading a wild personal attack on outgoing Treasury boss Gabriel Makhlouf. Unfortunately, rather than giving Makhlouf a ring to tell him live on the show, it’s just met with more nodding.

So who is this podcast for?

It’s basically unlistenable for anyone who isn’t aren’t deeply embedded in politics, and there will be next to no new information for those who are deeply embedded. The personalities aren’t particularly charismatic. The production is neither unprofessional enough to be ‘so bad it’s good’ entertaining, or good enough to be worth following on the strength of that alone. So who is the podcast for? From episode 1, the only realistic answer to that is people who already support ACT, who want their views reinforced and repeated back to them.

Honestly, there’s no reason why you couldn’t just pitch to talkback stations to have David Seymour do more long form slots. And for the rest of us, let us be glad to live in a society that cherishes freedom, so that we can exercise our freedom to not be bored to tears listening to this.