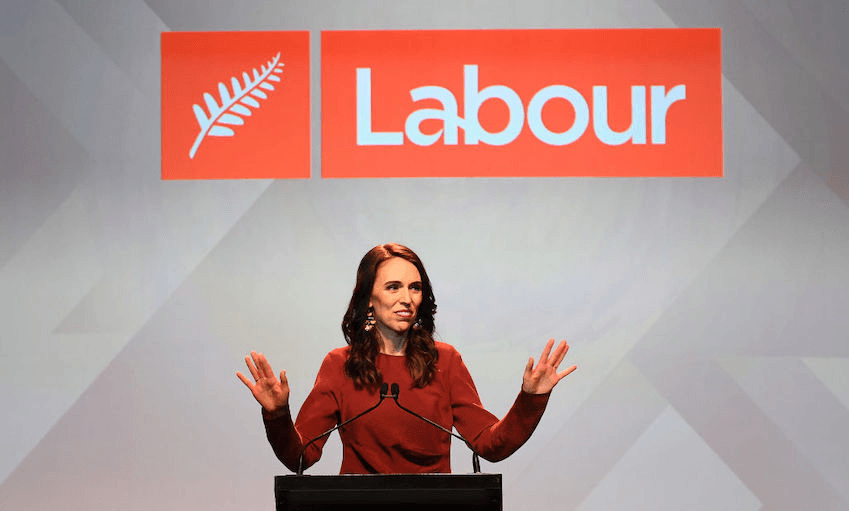 Labour goes to town on a record breaking night

There was delight to be found at Labour’s election night function, but not too much. As in the campaign as a whole, caution trumped exuberance. Justin Giovannetti was there.

There was a sense of near disbelief most of the night at Labour’s campaign event in central Auckland as the results poured in and they were better than almost anyone had expected.

About half of New Zealanders cast a vote for Labour and, implicitly, for leader Jacinda Ardern, a blowout win that saw the party carry electorates across the country that it hadn’t expected to win. For hours, the Labour faithful didn’t want to get too excited. Like fans at a sports game, they were worried too much cheering might blow a historic chance.

“I think everyone expected Labour to do well, but I don’t think people expected it this early,” said Adam Brand, a leader in Young Labour who featured prominently in The Spinoff’s youth wings series. He was nursing a $10 plastic glass of Jim Beam, his fingers crossed for most of the evening.

“If they opened the bar I’m afraid they’d drain the party’s coffers,” added Brand. A queue formed up at the bar, which did brisk business draining casks of wine and hawking Heineken in plastic cups.

As the results kept coming in and Labour’s lead held, the emotions slowly started coming out. There were waves of cheers as the party was shown on a large screen in the middle of Auckland’s town hall leading in seats like Ilam and Rangitata.

David Parker, a senior Labour MP who holds a number of posts including attorney-general, was one of the first in the room to use the term “landslide” to describe the win. There was s cheer as Labour nudged  ahead for a moment in Papakura, National leader Judith Collins’ electorate.

“I think we’re very privileged to have a prime minister as good as Jacinda Ardern, we’re also lucky to have a system of government that is maintaining a consensus with the people at a time when politics is so fractured around the world,” said Parker.

Hours later, Labour leader Jacinda Ardern would take the stage and make a similar point. Reaching out to National supporters who have voted Labour this time, she said New Zealand is still a nation where people listen to each other and debate.

“Elections aren’t always great at bringing people together but they also don’t need to tear one and another apart,” she said. The remark comes as the American presidential election enters its final weeks. That election has been one of the most divisive, in a country with a recent history of polarising elections.

Back on the floor in Auckland, Parker’s bet in the office pool was 48.6%, close to the final result, but not quite. One of the challenges facing the National Party now, he said, is that they’ll be bringing in very little new talent while Labour will add more than a dozen new MPs.

“We’ll do our best to honour that trust,” he said of the party’s new supporters. “And we have a lot of good MPs are coming, good talent that’ll serve the Labour Party well for a decade at least”.

Willie Jackson, an outspoken Labour MP, said that the evening’s result was a repudiation of the National Party. The opposition’s vote dropped by over 17%.

“I think this shows that there’s an ugliness from the National Party campaign. I know Judith was giving it her all, but people don’t like that style of politics, either from them or from her,” he said. In the final week of the campaign, Collins called Ardern a liar and goaded the Labour leader to sue her.

“New Zealand is at a different place now. Our prime minister sets the benchmark, she shows great leadership. We’re all learning from her and I probably have to learn a bit more,” he joked.