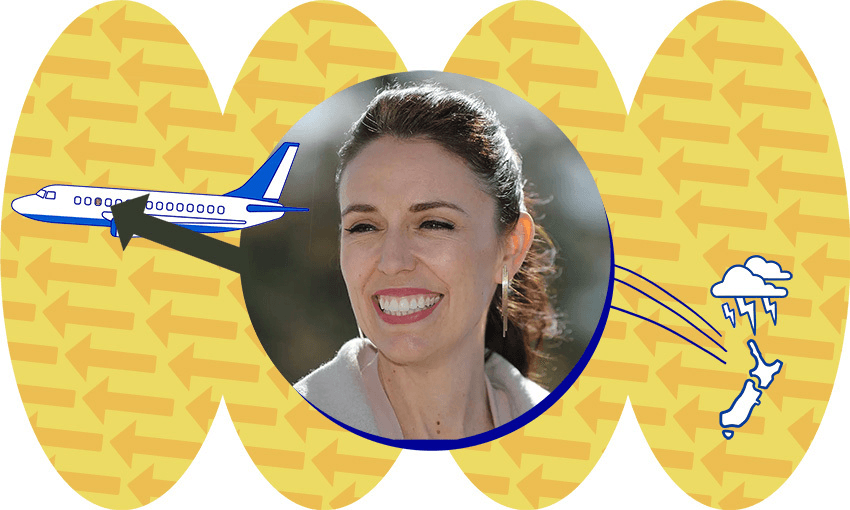 Jacinda Ardern is leading a delegation of 12 business leaders to Singapore and Japan (Image: Getty/Toby Morris)

Why Jacinda Ardern is loving her escape to Asia

The prime minister looked not so much jet-lagged as energised as she began her two-stop Asia trip. No wonder – offshore excursions can be a blessing for political leaders, writes Toby Manhire.

It’s been a long time between drinks – Ardern was to have led a trip to Australia last July, but a Covid outbreak in New South Wales put paid to that – and today Ardern is (possibly) sipping on a Singapore sling. The second half of the six-day trip is in Japan, albeit minus the three unfortunate people among the diplomatic and business delegation who tested positive for Covid in Singapore, probably thanks to remnants of an old infection getting swabbed off the confounded nasopharynx. While you might envy Ardern’s destinations, the schedule not so much; the NZDF 757 lumbers home on Sunday, with the Anzac Day dawn service the next morning.

The goals for the trip are hard to argue with: press the flesh – elbows if necessary – with strategically important partners, talk up multilateralism at a delicate geopolitical moment, build trade links, open doors for the business leaders who are tagging along, and promote post-fortress New Zealand as open to tourists. But it serves another function for Ardern: a shift into statesperson gear on the world stage, where her reputation for leadership through the Covid crisis shines brighter than it does at home – in the hope that some of that light bounces its way back to Aotearoa.

It offers a mini-break away from polls tracking the wrong way. Away from the minutiae of what a traffic light setting does or doesn’t mean. From exiting MPs causing trouble. Maybe even from the accursed cost-of-living crisis. When the front lawn of parliament is only just growing back after an evisceration by mud and fire, the grass really is greener. If you’re lucky, a host government might even name an orchid after you – ideally a dendrobium which produces flowers with white petals and sepals with a flush of purple towards the tips.

Leaders travelling abroad don’t of course get to forget completely about domestic political issues. When there are rolling scandals, especially, it just provides a more exotic backdrop for the cameras. John Key, for example, once endured a stand-up at Los Angeles airport almost entirely taken up by questions about pulling a ponytail. But flying away can offer a chance to blow away the cobwebs, to shake off ennui. Apart from anything else it simply means a change of scene.

Speaking to media yesterday in a Singapore hotel, having just announced a renewal of a working holiday scheme for Singaporeans, Ardern seemed to have gained energy, liberated from the yellow, white and timber stripes of the Beehive theatrette. Asked by one reporter – and I quote – “what’s the vibe check on making it overseas?” she grinned, glanced up at the ceiling and said, “Yeah, it is fantastic to be able to pick up again what has been previously such an important part of this job, and that is promoting New Zealand’s interests abroad, promoting our exporters, promoting our people. To be out and able to do that again is fantastic.” It wasn’t yet the same as it used to be, though. “You are reminded,” she said, “that the whole world is in a transition right now. I’m up to my third [Covid] test as part of this trip. The world isn’t quite back to normal. But we are in a great position as a nation to encourage people to come back to our part of the world because we are open for business.” Like Key before her, Ardern is a pro at the sales pitch.

For leaders of the opposition, motorcades and guards of honour aren’t part of the package. For Christopher Luxon, not yet five months into his job, the hope will be that the headline announcements on Ardern’s expedition amount to little more than a handful of working holidays. He’ll keep banging the drum on cost of living, attempting to seize back the steadiest-hand-on-the-economic-tiller advantage, especially with fresh inflation numbers emerging on Thursday. While no one will argue that Ardern shouldn’t be travelling, it’s always easier when the economy is humming. The accepted wisdom in the US, for example, is that presidential trips offshore should be kept to a minimum when times are tough at home.

A bigger global stage awaits next month, when Ardern leads a delegation to the west coast of the US, delivers the “commencement address” at Harvard University and, presumably, will attend the Asean leaders meeting being hosted by President Joe Biden, as announced by the White House at the weekend. That will be a longer trip, too, and while Ardern won’t expect the fawning reception of yesteryear, she can be confident of another round of positive foreign press coverage. For Luxon, it’s an opportunity, too, to make serious inroads on home ground.

As for the trip under way, it’s a timely escape for Ardern, with just three real hazards to avoid. The perennial risk of a domestic political distraction. The novel threat of testing positive for Covid. And the always live possibility that the beloved old 757 steed refuses to fly.