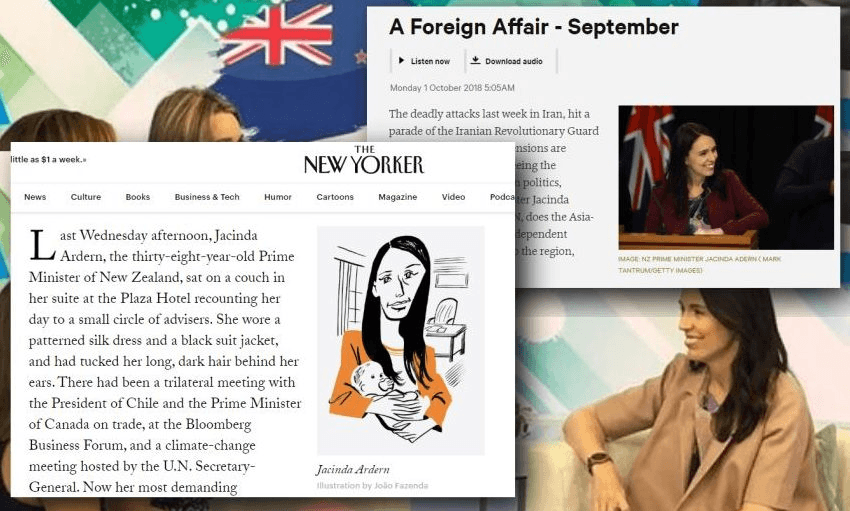 Jacinda Ardern really did make a splash on the world stage

The latest international takes on the New Zealand prime minister, in the New Yorker and on the ABC, underscore the scale of her achievement at the UN in New York last week, writes Toby Manhire.

On Sunday morning RNZ’s Mediawatch programme struck a sceptical pose and stared down the New Zealand coverage of the prime minister’s just completed trip away. “Did the media mistake exposure and international interest for genuine impact and influence?” it wondered, in introducing a compelling demolition of an argument that no one in the media had been making.

The programme detected “cultural cringe” in a news media that “should be looking for something more substantial”, and wondered “have our media been giving us the wrong idea about Jacinda Ardern’s actual impact at the UN?”

The package offered a very good roundup of some of the coverage, but its argument was aimed at straw. Did New Zealand have a genuine impact and influence on America’s dumb belligerence towards Iran? No. Did it make a dent in the Kavanaugh hellscape playing out in DC? Of course not. Did it persuade the permanent-five on the Security Council to throw down their veto powers with weeping apologies for being power-hungry dicks? No, it didn’t do that. Pathetic!

With the possible exception of one studio intro on One News (“Our prime minister is at the centre of a pivotal moment for the future of the United Nations in New York”) the coverage was mostly proportionate. No question we’re capable in our faraway little South Pacific country of overstating our importance in the world; I’m ready to cringe at a moment’s notice, but I saw little to bring that on in the reports sent back from New York.

No one seriously suggested that Ardern was some diplomatic superhero. Did she present a contrast to Donald Trump? Yes – see for example the Guardian video titled “Contrasting styles: Trump and Ardern speak at the UN” – but that’s not remotely the same thing as suggesting she challenged him for geopolitical influence or media spotlight.

There is nothing hyperbolic in the suggestion that Ardern made an impact massively beyond anything New Zealand could reasonably expect (although to be fair so did Jacinda Aldern, Jacinta Ardern and Lucinda Arderns). If it were just the Today and Late Show appearances that would be a public relations success in itself. But there was the meatier CNN interview with Christiane Amanpour. There were also substantial profiles filed for the New York Times and the Associated Press. The AP piece appeared across America and in many parts of the world, including the Fox News site.

Both of those pieces, written by correspondents in Wellington in the leadup to the UN, laudably avoided the fawning nature of some of the foreign press coverage of the New Zealand PM, contrasting her undeniable encapsulation of freshness, both in substance and symbolism, with the real challenges she faces in domestic politics.

And just as there’s nothing mutually exclusive about domestic political shit-fights and global political plaudits, there is nothing mutually exclusive about getting international attention for having your partner and baby watch you give a speech – the scene for which, unquestionably, won Ardern more international attention than anything else – and that speech having an impact.

It might have been a speech to a half-empty hall, in a UNGA graveyard slot, but Ardern’s message of multilateralism, rightly interpreted as a rebuke to Trump’s anti-globalist rhetoric, combined with the fact she did that while nursing a baby, created serious and important ripples. Plainly it’s very funny and absurd to suggest, as one of her ministers has, that she has “reset politics … across the planet”, but it’s daft, too, to suggest that impact hasn’t been real.

Two more bits of media coverage in recent hours underscore that. The New Yorker has just posted online a piece headlined “Jacinda Ardern’s juggling act” (“Grizzles” is the headline in the upcoming print edition), which includes an account of the PM being denied permission to breast-pump while walking through midtown Manhattan.

The monthly programme A Foreign Affair on Australia’s ABC has been talking about Ardern, too. It played a chunk of her first speech at the General Assembly, noting the presence of Clarke Gayford and Neve, observing “the impact this very powerful woman is having” and asking whether it all might signify “the beginnings of a different style of foreign policy discussion”.

Not that Ardern herself will have much chance to wallow in the international acclaim. Twenty four hours after landing back in New Zealand she sets about her weekly media rounds this morning. She’ll get little more than a breath or two to read the postcard from New York before being quite properly drawn back into the orbits around the mini-scandals of Wally Haumaha, Clare Curran and Meka Whaitiri, and the “cultural values” bluster from her deputy prime minister. But none of that changes the fact that in a UN week of Trump-sulking and grey diplomatic theatre, Jacinda Ardern made a real splash. And it isn’t cultural cringe to say so.