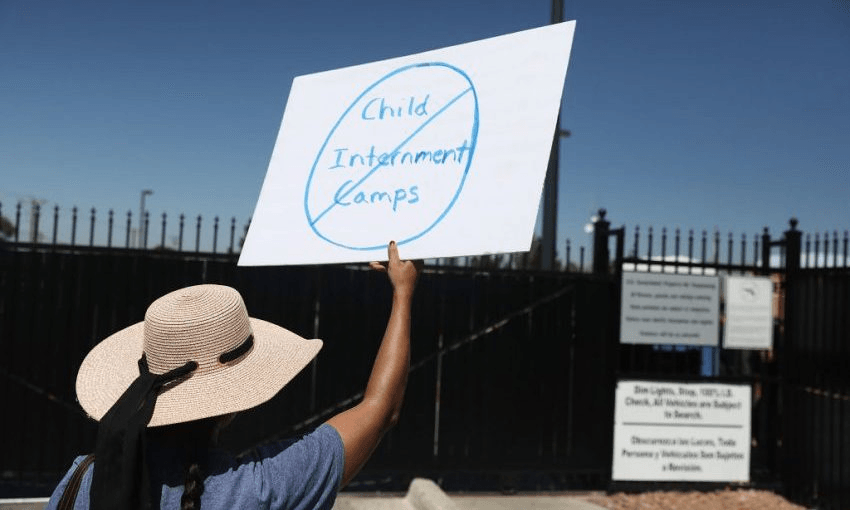 A protest against the separation of children from their parents in front of the El Paso Processing Centre at the Mexican border in El Paso, Texas. Photo by Joe Raedle/Getty Images

A protest against the separation of children from their parents in front of the El Paso Processing Centre at the Mexican border in El Paso, Texas. Photo by Joe Raedle/Getty Images

When the US is ripping children from the arms of their parents and throwing them into cages, we are firmly at the point in history where future generations might ask, ‘what would I have done?’ writes the Greens’ human rights spokesperson Golriz Ghahraman.

We live at a moment in global history when the world’s most powerful state is forcibily removing thousands of children from their families, and detaining them unlawfully, in mass cages, based on their place of birth.

Ironically, most of the affected families are far more indigenous to the region than the majority of the “legal” US population, but that hasn’t stopped this manner of atrocity at other moments in global history. To the Trump administration this delivers on election promises, and it feeds the frenzy of hate he has translated into political will.

The president is comfortable with questions both of legality and moral fortitude. In fact, when the uproar arose, he openly leveraged the caged children to secure funding for his billion-dollar wall at the Mexican border. The leader of the free world is therefore torturing small children either as immigration policy or a publicity stunt. Either way, it fits a familiar historic pattern and if history has taught us anything it’s that we are now well past the “causes leading to” chapter. We are firmly at the part of the history books where future generations ask “what would I have done, were I witness to that crime against humanity?”

I often speak about my experiences as a child asylum seeker, living under an infamous and repressive regime of war, and it feels unreal. I feel too unmarked by those horrors. I have wondered how different that would be had my family sought asylum in Australia and ended up on Nauru – or today, if we were on the United States border.

One of the most vivid memories of my life will always be our two hours or so in Auckland airport, waiting to see if we would be allowed to put forward our claim or be returned to face the unthinkable. The fear is palpable for me even now. I was nine years old. My parents were around my age, in their mid 30s. What they were escaping was bad enough that they left behind their home, family, professions, even their language, forever. To deter people in that position from seeking safety requires creating conditions worse than that which made them flee. It requires torture, like Australia’s off shore detention facilities, where sexual assualt by guards and suicide by detainees is routine.

This month, America may well have topped that with a new hell. Ripping children from the arms of their mothers and fathers, throwing them into mass detention facilities, with no guarantee of reunification.

The United States Immigration officials say 2,342 children were taken from their parents from May 5 to June 9. This includes toddlers and very young infants. The children have been incarcerated in facilities described as cages and warehouses. One father has already committed suicide. Secret recordings have been released of young children screaming for their parents, en mass, into the abyss.

Mental health professionals have repeated the clear evidence of life long damage that this type of abuse will engender. In a bold statement, the United Nations has called this policy illegal and in breach of its most universally accepted and binding human rights law, the Convention on the Rights of the Child. That Convention is universally accepted by all UN member states, bar one. America does not accept that children have binding rights, and has never agreed to uphold them in its domestic or foreign policy.

None of this should really be a shock to those of us who caught even a glimpse of the Trump presidential campaign. He routinely employed the kind of dehumanising language and scapegoating of minorities that history tells us leads to atrocity if it is normalised. The politics of hate and division was already winning referenda across the ditch in Britian. The birthplace of colonisation was ripping itself apart in a bid to condemn the lawful movement of persons across borders for employment. All this took place at a time when the greatest humanitarian crisis since the Holocaust was displacing millions in the Middle East. Just as the images of drowned migrant toddlers, like Aylan Kurdi, were breaking our hearts on the news every night, the Trump campaign was promising a Muslim ban and to build a wall at the Mexican border to keep out “rapists and criminals”. When politicians use minorities for political gain, we open the door to a spiralling rabbit hole of dehumanisation.

New Zealand has always stood as a counterpoint to the politics of hate and division. We “punch above our weight” on the diplomatic stage because our values are human values, but mostly because we hold steady to those values and shout them from the rooftops when the rest of the world seems adrift. We speak to fairness and human rights, as we did on apartheid, as we stood against nuclear testing in the Pacific. Now is such a moment.

The world is unsteady because “like minded” nations rarely criticise one of their own. But the lives of children is at stake. The lives of the most vulnerable families, without rights, without access to any resource including the language to fight back is at stake. If we are part of an international community then we know that, as in any community, the way we treat our most vulnerable is the measure of the strength and goodness of our values. Condemnation of this cruelty is now necessary. What we see happening today at the US border is frightening, in part because it has happened before and the world has said (repeatedly): Never Again.