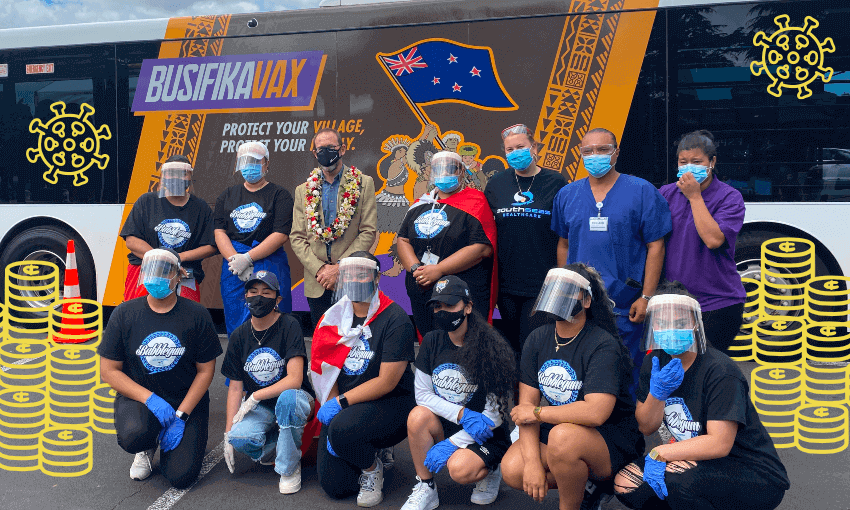 Leading healthcare professionals and government ministers hope new funding for Māori and Pacific social service providers will not only dampen the impact of omicron, but also resolve historic inequities faced by these communities.

South Seas Healthcare has been running one of the largest Covid-19 testing stations in South Auckland almost non-stop since the start of the outbreak. The provider is among 160 organisations that will benefit directly from $140 million in new government funding announced yesterday to help bolster the omicron response, with $18 million of it going directly to Pacific providers like South Seas. The organisation’s chief executive, Lemalu Silao Vaisola Sefo, said this will enable them to make long-term changes to how healthcare is delivered in the region.

“We can pay for more staff, we can pay the coordinators at churches who organise things, and we can invest into the churches to build their capability,” he said.

For much of 2020 and 2021, criticism mounted against the government for not trusting or sufficiently resourcing Māori and Pacific health providers, leading to much slower vaccination uptake rates among these communities. Funding that was allocated was often criticised for being difficult to access due to unnecessary layers of bureaucracy.

At yesterday’s announcement, associate health minister Peeni Henare acknowledged Covid had highlighted these issues but said he hoped this funding boost was a sign the government was listening to those criticisms and responding.

“What we’ve seen through the Covid response is huge inequities in the way that Māori and Pacific providers have been funded,” he said, in a press conference following the announcement.

“So we’ve made sure that this funding will extend to the end of this year and beyond, because once we know omicron has come and gone, we need to catch up on regular health checks, child immunisations, and a whole heap of other work that our communities have put to the side while we focus on Covid.”

Usually one of the government’s biggest critics, John Tamihere spoke to the large crowd of government officials, MPs, media and community services staff following the announcement. The normally confrontational former Labour minister was in a far more generous and reflective mood, thanking the ministers in attendance for finally putting some faith in Māori and Pacific providers after years of advocating for such an approach.

“We’re all getting a bit tired [of this pandemic], but we have to hold our shape and our discipline,” he said.

“And I just want to start by saying no other government leadership would provide the type of targeted funding to Māori and Pacific organisations as this government has,” he said, before he quickly reminded everyone how unusual it was for such praise to come from someone currently holding the position of vice-president of the Māori Party.

“When we use words like kotahitanga, we can’t just lay false words on the marae ātea, and so I’m here today to practise our kotahitanga. I just really want to thank the prime minister and these ministers for acknowledging the mana of our communities and the ability they have for self-determination.”

Māori development minister Willie Jackson has been at loggerheads with his old mate Tamihere many times during this pandemic, but said he was pleased these tensions have been eased.

“First and foremost John is a community man, and he’s at the coalface,” he said.

“I know what the brother does in the community, and I was really pleased to hear his tautoko and to see our people coming together.”

There are currently more than 6,000 active cases in South Auckland, and Māori and Pacific make up more than 50% of new infections. But minister for Pacific peoples and Māngere electorate MP Aupito William Sio reiterated that while this funding would reduce the impact of infections on Māori and Pacific people, this investment would benefit everyone.

“As we saw last year how quickly it moved from being focused on Pasifika to being right across this region. So even though we’re targeting Pasifika and Māori, make no mistake, this is about all of New Zealand and we’ve all got to do our part and support our providers – because that’s what will work.”