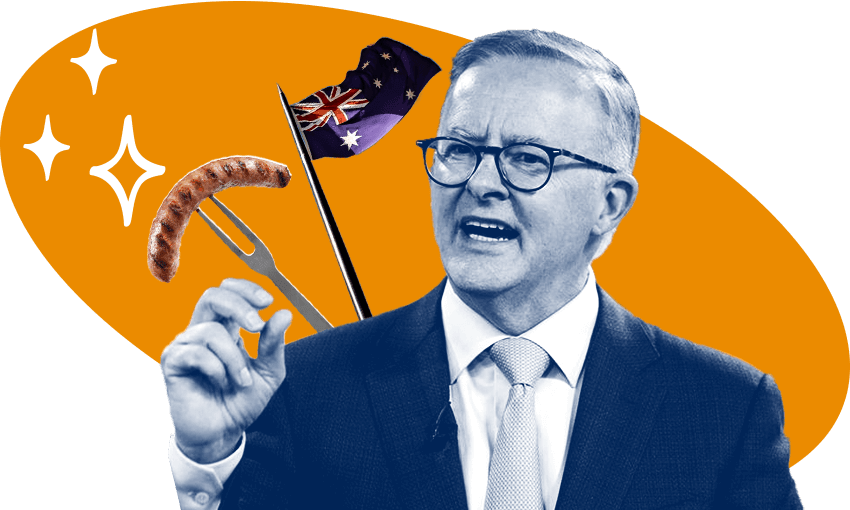 By Ben McKay
Guest writer
Made possible by

Women revolted, the Greens roared, and Scott Morrison’s Liberals were given the boot. Australian political journalist Ben McKay takes a look at the big stories from Saturday night.

Monique Ryan said it best: The climate has changed. The independent was one of Saturday night’s biggest winners, part of the teal revolution that has upended Australian politics, and in her case, turfed out treasurer Josh Frydenburg.

The Australian election was a win for the climate. For women. For integrity in politics. For Indigenous recognition. For pretty much everything Scott Morrison didn’t grapple with.

And so out goes ScoMo, the miracle election winner in 2019, shown the door by Australians who had a gutsful of his leadership and his scandal-plagued government. More than a dozen of his Liberal colleagues will follow him, most of whom are moderates, and there will be plenty of recriminations. Including from the French.

In comes Anthony Albanese, the affable if uninspired Labor true believer who called himself the “son of a single mum who was a disability pensioner” in an emotional victory speech. He becomes just the fourth Labor leader to win government since World War II.

Behind the change of government, the “teal” wave of independents predicted by Toby Manhire became a tsunami, claiming seats across the country that will shake up the way Australian politics is understood and contested. The floor below the major parties has fallen out.

What the hell just happened? Honestly, we are only just starting to understand it. We don’t yet have a final picture of how the 47th parliament of Australia will look, but it was clear enough for Morrison to concede on Saturday night.

With 76 seats needed for a majority, as of Sunday afternoon, the official tallyroom has Labor ahead in 75 seats, though the ABC and other news outlets (Guardian, Sky News) are only confident enough to give them 72 or 73. Noted election-watcher Ben Raue predicts Labor will land on 79. Raue has the Coalition possibly finishing on 56, leaving a crossbench of 16. Counting of postal and pre-poll votes will continue over the next few days to determine the final numbers.

With so much still to shake out, here are a few things we can safely say.

Voters fled the coalition and gave ScoMo the finger

Three years after his poll-defying win, Morrison led the Liberal-National coalition to a thumping loss. The signs were clear. During the campaign, he asked voters to overlook his failings, and then he pledged to change. Australians – and particularly urban Australians – weren’t buying it. The Liberals may end up with no seats in the whole of Adelaide and just one in Perth and Melbourne. City-dwellers have given Morrison the boot.

The independents won and won big

Running on the climate and on restoring integrity to politics, teal independents scythed through the coalition. Some of their wins are doozies. Monique Ryan took Kooyong, the affluent Melbourne seat held by the treasurer, which has been in Liberal hands since the party’s formation. Wentworth, the Sydney seat of former PM Malcolm Turnbull, went to fellow teal Allegra Spender, and there were clear independent wins in Goldstein (Vic), Curtin (WA), Mackellar (NSW) and North Sydney (NSW). As coalition campaign spokesman Simon Birmingham put it: “we are losing heartland seats, seats that have defined the Liberal Party for a generation”.

As savvy commentator Annabel Crabb noted, a big story was women. Teal victories were all women – though they could be joined by ex-Wallaby David Pocock in the ACT Senate – and early breakdowns suggest the coalition’s female vote collapsed. Labor made a big play for the women’s vote with major child care promises but it’s hard not to link the result to Morrison’s poor handling of alleged rape and sexual harassment claims in parliament – and his tone-deaf leadership. Crabb called this result an “extraordinary flex of people power across the continent”.

While Labor won, they also went backwards – just less far backwards than the coalition. After preferences, Labor has enjoyed a 4% swing from the coalition to sit on around 52.5% of the two-party preferred vote (roughly where the polls were). But their first preference vote actually slid back 0.5% – meaning they have been delivered into government by Australians who didn’t vote Labor as their preferred party, but decided they were less worse than the Liberals. Labor also lost a seat, Fowler in Sydney, to an independent.

Still, Albanese played a savvy game. Labor’s relentless attacks on Morrison paid off and they picked up a swag of seats from the coalition – more than the independents won – including most of their target seats. Labor won suburban seats in and around Sydney (Reid, Robertson), Melbourne (Higgins, Chisholm) and Adelaide (Boothby). It may yet pick up others like Melbourne’s Deakin and Sydney’s Bennelong. But Western Australia is where Labor truly took off. With a swing of 12%, the ALP claimed Swan, Pearce, Hasluck, Tangney to paint Perth red.

Labor was also criticised for running a policy-light or small target campaign, but it worked. Two of Labor’s signature policies – a federal integrity commission and bigger emissions reductions – hit home. Poignantly, the first policy mentioned on stage at Labor’s victory party was the Uluru Statement from the Heart, a pledge to give Indigenous Australians a place in the constitution and a greater say in their democracy.

They flew under the radar of the teals to the most impressive result in Greens history. Campaigning primarily on climate change, they scored 12% of the vote and lonely Adam Bandt now has company in the house, with at least two Brisbane MPs joining him. They will also make gains in the Senate. Bandt declared the result a “Greens-slide” and the party will be crucial in the next parliament.

So what will happen next?

Albanese and foreign minister Penny Wong will be sworn in swiftly to take Australia’s place at a meeting of “quad” leaders – USA, Japan, India and Australia – in Tokyo on Tuesday. Nothing like meeting with the leader of the free world to look prime ministerial.

At home, the Liberals will begin to pick the up the pieces. With many moderates defeated, the battle to write the election history has begun, with some odd contributions, and at least one confirmed runner in the leadership race: Peter Dutton, the hardline Queenslander.

When Albanese and Wong return, the election landscape will be clearer. Regardless of whether Labor gets its majority or falls short, it will need to negotiate with independents and minor parties to pass legislation in the Senate. On this front, Labor will feel confident.

Albanese was Labor’s leader in the house during Australia’s only previous minority government, led by Julia Gillard and Kevin Rudd in 2010-13, shepherding bills through parliament’s choppy waters. What he learned will be critical. It will not be lost on Albanese that voters rejected that government, running into the arms of Tony Abbott to start the coalition’s nine-year grip on power.

This could be the Age of Albo – or another minority shitshow. Strap yourselves in.

Ben McKay is the sole Australian in Wellington’s Press Gallery, as the New Zealand Correspondent for Australian Associated Press. These are his personal views.