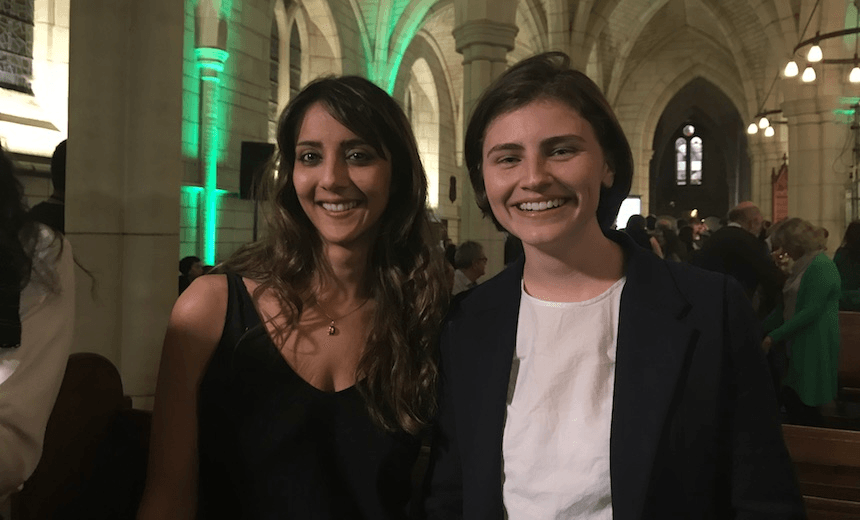 10.03pm: Party Watch – the Greens are getting used to this

David Farrier is at the Greens and Peter Gordon’s at Labour. Election night party parties attract the celebs, although not as many as you might think. Weirdly, some people find better things to do with their time.

At the Green Party party, at St Matthew’s-in-the-City, they’re eating dolmades and brie and there’s a hubbub but there’s not much excitement. The party’s done better than they feared and worse than they hoped. Chlöe Swarbrick is standing around looking serious. Everyone’s looking serious. The sound comes and goes on the screen, which doesn’t help.

Turns out he means the prospect of a National government with Winston Peters. He’s not altogether wrong.

Mostly, they reckon it’ll be 8%, which means the get new MPs in Swarbrick and Golriz Ghahraman, and the return of Mojo Mathers.

Back at Labour, the pundits are saying Winston Peters will tell Labour that the price of a coalition will be to tell the Greens they have to stay on the cross-benches and give their support for confidence and supply. A Labour-NZ First government, supported with gritted teeth by the Greens.

Mostly, the people at the Greens’ party tonight are used to this. But it’s not the best amount of fun. Rawiri Paratene, the actor and father of Marama Davidson, the second-ranked Green MP, is sitting quietly behind a pillar.

“This is not good,” he says, with that mournful look for the ages he’s very good at. Shakespearian training. Triumph obviously would be better, but you almost get the sense that complete disaster might be preferable. Not really, of course. But it would be something to really fire them up.